A place for space? U of T startup builds out a global satellite network – from downtown Toronto 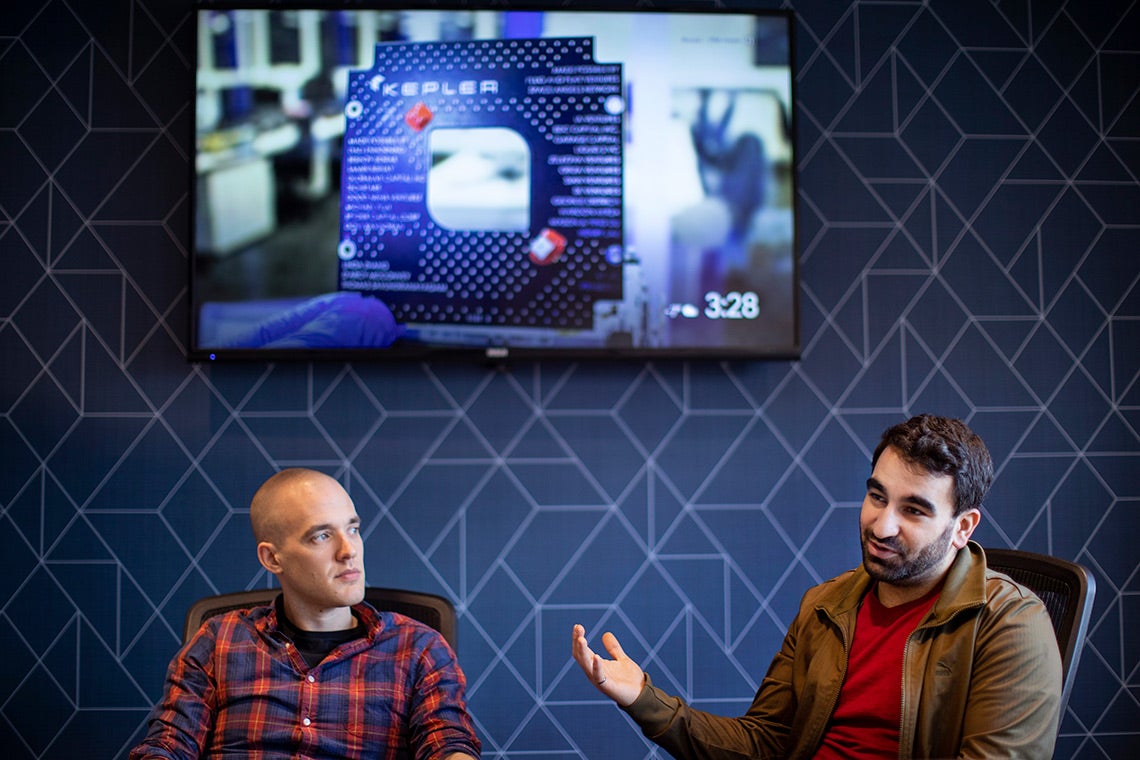 Located above a strip of Spadina Avenue populated by nail salons, currency exchange vendors and a leather supply store, the fourth-floor office of Kepler Communications looks like that of any other tech startup – exposed heating ducts, open concept layout, a large conference table for meetings.

That is, until you spot the control room.

Inside the glass walls, an operator stares at a bank of six large computer screens that display data from Kepler’s tiny communications satellites as they streak overhead, from pole to pole, at an altitude of about 600 kilometres. Above his head are four clocks displaying the local times of Kepler’s ground-based antennae in Markham, Ont., Inuvik, N.W.T.,  and Svalbard, Norway, as well as co-ordinated universal time or UTC.

With 30 employees and counting, it's all part of Kepler's grand plan to build a low-cost constellation of 140 communications satellites over the next several years.

“We're going to be a global telecommunications network,” says CEO Mina Mitry, who did both his bachelor’s and master’s degrees at U of T in aerospace engineering.

“That's not something to shy away from. For the cost of the capital expenditure we've incurred, who else in the world has been able to do that?”

With two satellites already in operation, Kepler is currently test driving a product called Global Data Service with customers. The high-bandwidth service allows companies to send bulk data from fixed locations or moving vessels anywhere in the world – not unlike a space-based Dropbox. Already companies are using the service to send data from remote locations, including the High Arctic, where there is either no ground network infrastructure or satellite transmission costs are prohibitive. In the near future, Kepler also plans to help companies track shipping containers, construction equipment and other assets around the globe.

Ultimately, Kepler's grand vision includes extending its low-cost network connectivity beyond Earth so that satellites and other space vehicles can talk to each other, paving the way for a host of novel applications – from real-time tracking of autonomous vehicle fleets to monitoring first responders working in disaster zones.

"When we get to that stage, we will be right on the cusp of not only providing true connectivity globally, but also extra-terrestrially – other devices that are up in orbit, which have traditionally never had that form of connectivity.”

If the idea of providing the communications backbone for a new “space economy” in Toronto seems fanciful, Mitry is quick to assure that it’s not.

“I think we have the right talent, the right universities – we've got an incredible wealth of knowledge – and people that want to come back to Canada just to work for Kepler," he says.

In fact, Mitry estimates that a full 15 per cent of the company’s employees have been “repatriated” from places like Silicon Valley, Seattle and countries in Europe. These are bright minds who left Canada in search of exciting careers, he says, but are now being drawn back by the opportunity to work for innovative local companies that are helping fuel Toronto’s tech boom.

Nor is it just Kepler that has spotted an opportunity for Canadian startups at edges of Earth's atmosphere. The Creative Destruction Lab, a seed-stage accelerator affiliated with U of T’s Rotman School of Management, last spring launched a dedicated stream for space-focused startups. Its lead mentor is none other than Chris Hadfield, the first Canadian commander of the International Space Station. Kepler’s origins can be traced to the University of Toronto Aerospace Team, a not-for-profit initiative Mitry helped build during his graduate studies. Originally focused on building aircraft and drones for competitions, the group later moved into rocketry and satellites – all while growing its membership from about five to over 100 people.

That’s where Mitry met fellow co-founder and current vice-president of strategy and business development Jeffrey Osborne, as well as Kepler's other two co-founders Mark Michael and Wen Cheng Chong. The group's work on the team provided them with early insight into how the space industry’s once insurmountable barriers to entry were steadily being eroded thanks to shared launch vehicles and a changing regulatory environment.

“We understood that deeply,” Mitry says. “But the rest of the world may still have had the common misconception that, 'Well, you're not Lockheed Martin, you're not a major aerospace contractor, therefore you can’t access space.’”

It wasn’t long before the group spotted an opportunity to prove such conventional thinking wrong.

Kepler’s co-founders decided there was money to be made by using a low-cost satellite platform and high-bandwidth service. So they focused on CubeSats and the Ku-band frequency, which allows for particularly high data throughputs. Their efforts were supported by U of T’s Entrepreneurship Hatchery and Start @ UTIAS – just two of the many entrepreneurship hubs on campus.

While there were some significant engineering hurdles to overcome with regards to miniaturizing components, Kepler managed to successfully put its first microsatellite into orbit in early 2018 after launching from a rocket in northwestern China. It followed up the feat with a second launch of a similar satellite ten months later – this time on a rocket that blasted off from India.

One of Kepler’s existing clients is the German shipping company F. Laeisz, which operates an icebreaking vessel called the Polarstern that spends most of its life outside the range of typical geostationary communications satellites. The crew plans to use the Global Data Service to send back to shore giant files that include high-resolution imagery, data logs and video.

A third satellite is scheduled to be launched this spring or summer. Unlike the first two, this one will also be equipped with narrow-band communications equipment. It’s designed to provide a more cellular-like data service to connect smaller assets such as remote sensors in weather stations or moving containers and rail cars.

Osborne says the narrow-band service will target industrial customers who want insight into questions like: “Where is my asset while its moving around the globe? What is the temperature of my asset? Has it been damaged or stolen?” It's basically a way to provide global connectivity, from space, for what's known as the Internet of Things, or IOT. A rendering of one of Kepler's tiny, low-cost satellites, which aren't much bigger than a loaf of bread (image courtesy of Kepler Communications)

Kepler’s efforts to build out its constellation received a boost after it successfully raised US$16 million in financing last fall. It plans to have the first generation of the network in place, consisting of 10 to 15 spacecraft, by early 2020. It’s also planning to add two more antenna sites in Norway and New Zealand.

Of course, Kepler isn’t the only company eyeing space-based communications networks. Elon Musk’s SpaceX, for example, last year received approvals from the U.S. Federal Communications Commission to move ahead with plans to put as many as 12,000 satellites in orbit with the goal of providing global Internet connectivity. Each satellite in the proposed Starlink network would be about the size of a car.

How does Kepler plan to compete? Osborne says the startup was deliberate in its decision to focus narrowly on commercial customers, and has amassed a favourable regulatory position in the marketplace “that gives us advantages when it comes to being able to offer different types of services.”

Being based in Canada also has its benefits. Kepler has more opportunity to take advantage of global launch schedules than its American competitors because it’s not subject to U.S. International Traffic in Arms Regulations, or ITAR, according to Mitry. He adds that Kepler has also benefited from Canada’s more favourable immigration laws when it comes to hiring global talent.

But the biggest difference between Kepler and many of its competitors comes from its strategic decision, made early on, to use a cheaper, more nimble fleet of satellites. Each one has a three- to five-year lifespan as opposed to a decade or more for more conventional spacecraft.

"We have the advantage of being able to fill in the gaps of connectivity a little bit easier than some of these other operators that are building mega-constellations."