Phew! U of T student made her final, thanks commuters who helped during TTC delay 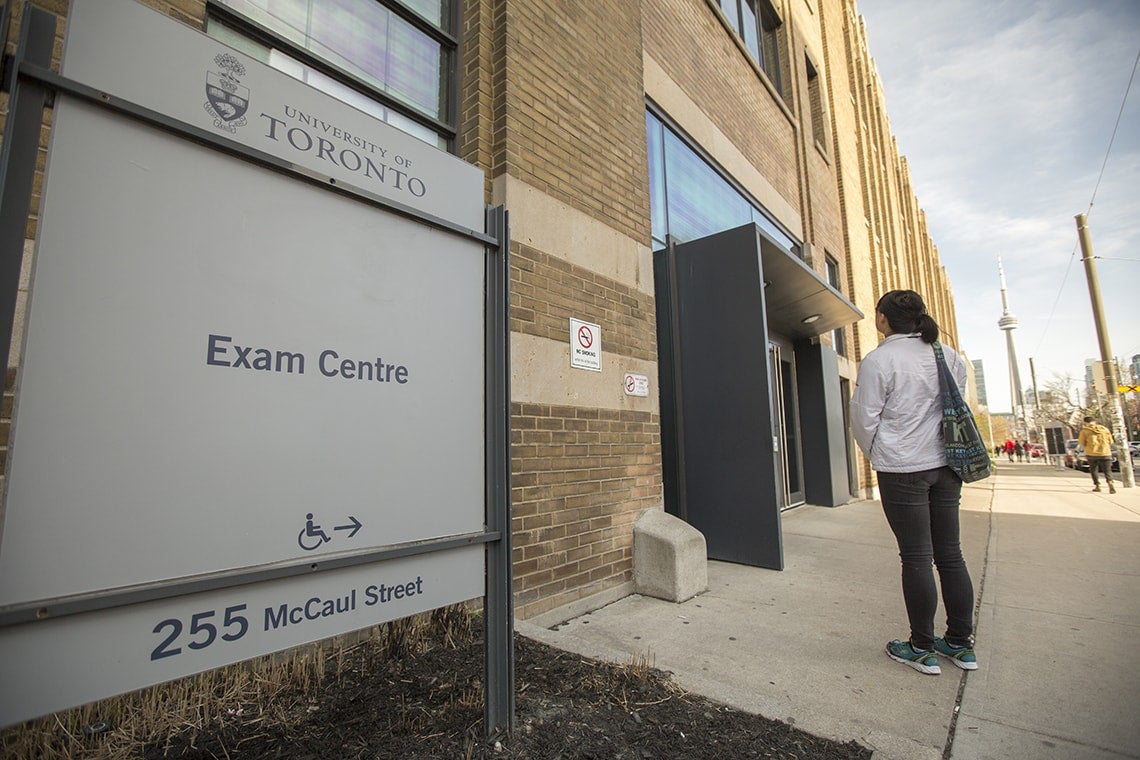 Despite the TTC delay that almost made her miss her sociology final, A. Zhang reached the exam room and was able to write the exam (photo by Johnny Guatto)

A. Zhang has a habit of arriving early for everything – which made getting stuck on the TTC the morning of an important exam all the more stressful.

The first-year undergraduate shared her story after U of T News published an article about the strangers who helped her reach the exam room in the nick of time last week.

Zhang was travelling on the Bloor-Danforth Line on the way to a 9 a.m. sociology final on McCaul Street on Friday. Then, the subway stalled.

“For me, it’s ironic because I’m always early to everything so the one time I’m late for something, it has to be my exam, and I have to almost miss it,” she said.

A 24-minute delay was caused by a suspicious package found at the Bloor-Yonge Station, which turned out to be a false alarm, according to TTC spokesperson Stuart Green.

Zhang – stuck somewhere underground with minutes to go before her peers would receive their exam booklets – understandably lost her cool.

“There was a lady sitting (nearby), and she noticed that I was crying,” Zhang recalled. “Six or seven people around her were talking to me, asking me what was wrong, comforting me.”

“Another ”lady offered me a tissue, which was really kind of her.

Finally a woman with a British accent – Zhang didn't catch her name – offered to pay for an Uber from Chester Station. But by the time they exited, the estimated wait time was 20 minutes and Zhang had none to spare.

By then the subway was back up and running so the stranger guided Zhang through the mob in the station and “squished” her onto an overcrowded train.

From St. George Station, she ran to the exam hall and arrived at 9:30.

“When I got there my TA was super friendly,” she said. “He said, ‘You made it!’ and for some reason that triggered me, and I burst into tears.”

She was able to write the exam on the spot, she said. The final, she added, was worth 35 per cent of her final mark – not 50 per cent as U of T News reported last week based on an interview with a commuter.

In hindsight, Zhang says she wasn't entirely surprised by the outpouring of support she received.

“I personally think Toronto is a much kinder place than any other large city I’ve travelled to,” she said. “A lot of people say there’s a kind of distance in Torontonians, but I think it’s more politeness.”

Late for an exam? Here's what to do:

Sandy Welsh, vice-provost of students, offered some general advice for students across all three campuses.

“If you are late, go to the exam location to learn about your options. If you have missed the exam entirely, go to your registrar's office as soon as possible,” Welsh said.

“It is not the end of the world – but I understand it may feel this way in the moment.”

The silver lining to Zhang's story, Welsh said, was that it's a “reminder that our city is filled with caring people.”

“It is heartwarming that people, who were also delayed, took the time to help reassure the student and help get her to her exam,” she said. “I went home on Friday a proud Torontonian and happy that our city is looking out for our students as well.”

For students in the Faculty of Arts & Science at the downtown Toronto campus, Deborah Robinson, the faculty registrar and director of undergraduate academic services, said they can still write the exam if they are under 20 minutes late, although they won't get more time. If they miss the final, they can petition to write a deferred exam.

“If a student doesn’t have a history of having previously requested a deferred exam because of a timetable misread or some other issue, the petition is usually granted,” she explained.

“If something does go wrong – if you get sick the day before the exam, for example, or if your alarm doesn’t go off – remember that there are people here ready to help and support you.”

Information for U of T Scarborough students

Information for U of T Mississauga students