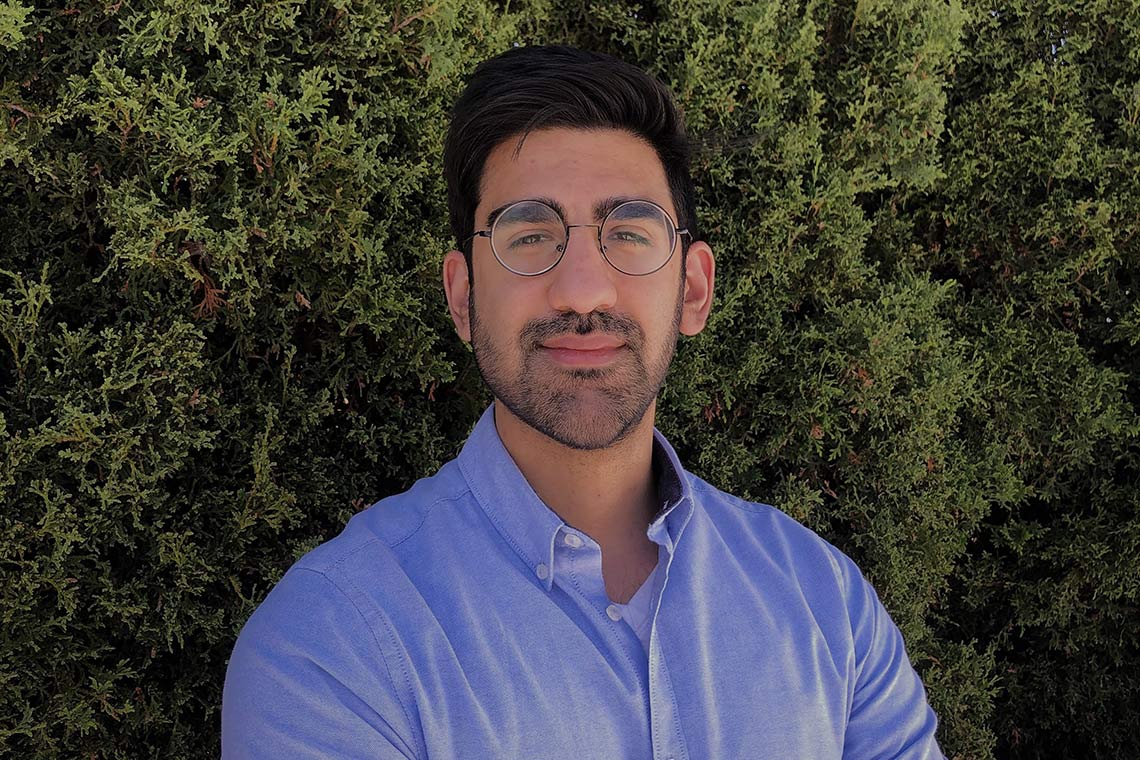 Faraz Alidina, a third-year PhD student in the department of Near and Middle Eastern civilizations, says the format of the annual 3MT contest "really forced me not to hide behind jargon, prolixity or complexity" (photo courtesy of Faraz Alidina)

What do short stories from medieval Persian literature teach us about today’s political discourse?

Faraz Alidina can tell you – in less than three minutes.

The third-year PhD student in the University of Toronto’s department of Near and Middle Eastern civilizations in the Faculty of Arts & Science recently won the 2021 Three Minute Thesis (3MT) competition for his research on the works of 13th-century Persian poet Farid al-Din Attar.

“I feel very grateful that I was able to win because historically, at least at U of T, this competition has been dominated by students in the sciences,” says Alidina, adding that it can be particularly difficult to for humanities students to summarize esoteric-sounding research in such a short time.

Alidina was one of a dozen competitors at the virtual 3MT final that saw graduate students from across U of T’s three campuses attempt to explain their research in under three minutes to a panel of non-specialist judges. The annual event, hosted by CBC Ideas producers Nicola Luksic and Tom Howell, had over 250 audience members cheering on the participants.

Alidina, who says he was encouraged to enter the event by his PhD supervisor, Associate Professor Shafique Virani, won $500 for his first-place finish. Heather MacDonald of the Faculty of Music took second spot for her presentation on preventing oboe-related injuries, while Julie Sato of the department of psychology placed third for her work on postnatal nutrition and brain development in premature infants. Emily McGaugh of the department of physiology took home the People’s Choice Award for her presentation on how stem cells can help cure type 1 diabetes.

For his presentation, Alidina opted to take a creative approach. He began with the story of Shahrzad, the famed storyteller of One Thousand and One Nights who hoped that her intriguing tales would delay her execution and persuade the murderous king to change his ways. Like Shahrzad, many writers in the medieval period – writing in Persian, Latin, Arabic and Italian – realized that princes and people were best convinced not by means of abstract principle, but through story.

With his research, Alidina explained that he hopes to unpack the narrative techniques – or what the Arabic literary tradition calls the “science of rhetoric” – behind the short stories of the 13th-century poet Farid al-Din Attar, a writer with a style so persuasive that critics sometimes referred to it as “the horsewhip.”

“These medieval authors used short stories not just to illustrate a point or an abstract ethical concept, but because stories actually provided a unique medium through which the consequences of ethical and political positions could be explored in their specificity,” Alidina said in a Zoom interview after the event. “Ironically, fiction is the best place where we can model the world as it is, in its uniqueness and its variance.”

Probing medieval theories of persuasion is hardly an esoteric pursuit for Alidina, who holds a master’s degree in religion from Harvard University and an undergraduate degree in political science and Middle Eastern studies from McGill University. He says that understanding what persuades people has taken on new urgency in the age of alternative facts and conspiratorial thinking. Citing recent examples like Brexit, he notes that attributing human action to self-interest doesn’t always explain political and electoral outcomes.

While he’s still in the early stages of developing his research, Alidina says that preparing for 3MT helped him articulate the major questions underlying his work.

“The format of the competition really forced me not to hide behind jargon, prolixity or complexity. And I thought that was a useful exercise, regardless of whether I came in first or didn’t make it past the first heat.”

Alidina hopes his victory will inspire more participation from students in the humanities.

“In the humanities, we’re perhaps more inclined to have this purist vision of our intellectual lives – knowledge for the sake of knowledge. There’s nothing wrong with having that internal compass of curiosity, but that doesn’t mean we should shy away from thinking about how our work can play a role in the world in which we live.

“The humanities has a very unique and specific voice, particularly in this time. We shouldn’t be afraid to speak a little louder.”