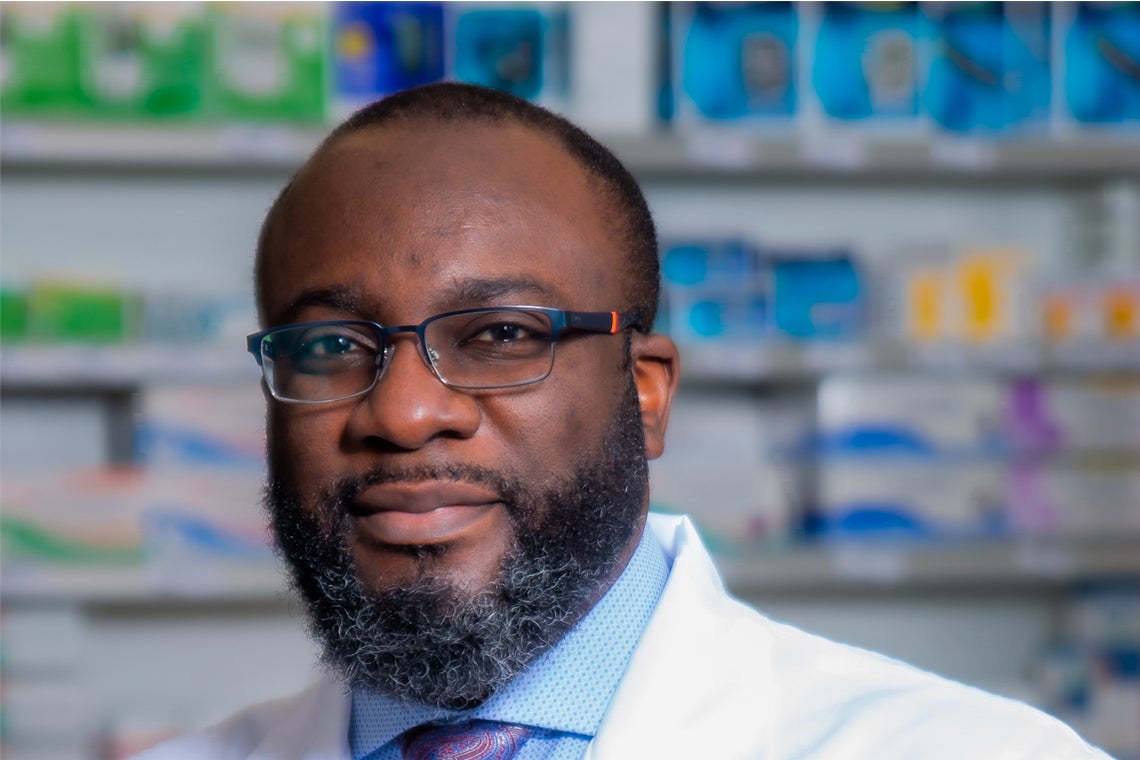 Eustace Orleans-Lindsay, a PhD student in U of T's Leslie Dan Faculty of Pharmacy, manages a community pharmacy in Simcoe, Ont. and is a health advocate for migrant farm workers in the region (photo by Kobby Crabbe)

Eustace Orleans-Lindsay, a community pharmacist and PhD student in global health at the University of Toronto, is using his education and experiences to improve the health of migrant farm workers in southwestern Ontario.

Raised in Ghana, Orleans-Lindsay is a manager at the Loblaw Pharmacy in the Real Canadian Superstore in Simcoe, Ont. He also volunteers as a community leader and health advocate for seasonal agricultural workers in the town of 14,000 near Lake Erie.

“These workers spend more time in the global north than the global south, but they face accessibility issues and disparities that citizens in the north don’t,” says Orleans-Lindsay, who studies pharmaceutical sciences in the lab of Jillian Kohler, a professor at U of T’s Leslie Dan Faculty of Pharmacy.

Orleans-Lindsay is chair of the Norfolk Seasonal Agricultural Worker Community Committee (NSAWCC), which connects workers with each other and the community. The group has organized events including health fairs, usually attended by about 300 seasonal workers, and an annual soccer tournament made up of teams from different farms.

One of their biggest initiatives was a clinic for seasonal agricultural workers. The committee played a pivotal role in preparing a foundational proposal for the clinic that received pilot funding from the former Local Health Integration Network (now Home and Community Care Support Services). The Grand River Community Health Centre ran the clinic from the second floor of the store where Orleans-Lindsay works.

Seasonal workers were able to see health-care staff with the help of translators two evenings a week on their usual days off, providing a direct avenue to health services. More than 6,000 seasonal workers come to Norfolk County every spring and receive Ontario health cards, but they typically don’t have family doctors and often visit emergency departments for minor ailments.

In the past year, the COVID-19 pandemic forced the committee to pivot from their usual activities to focus on advocacy and mental health. Orleans-Lindsay and others spoke to local media to help address misinformation about seasonal agricultural workers and COVID-19 – particularly the false belief that workers were responsible for bringing the virus into the community.

The committee has also offered support to workers upon their arrival in Canada, calling them for friendly visits while they quarantine in area hotels and providing welcome packages, reading material and even familiar food.

Orleans-Lindsay grew up in Cape Coast in southern Ghana and earned a bachelor’s degree in pharmacy at Kwame Nkrumah University of Science and Technology in Kumasi. He worked as a community pharmacist for several years, as well as in the Ghana scientific office of Pfizer global pharmaceuticals.

In 2002, he immigrated to Canada to join his wife, who had arrived a few years earlier. He was determined to continue working in the pharmacy field in Canada and, after several months of sending out applications, a pharmacist took him on as a student while he completed the Ontario licensing process – a process that took two years.

Once licensed, Orleans-Lindsay was offered a pharmacy manager position with Loblaws. He managed pharmacies in Burlington and Hamilton, Ont., as well as in British Columbia, landing in Simcoe in 2009, where he has been ever since.

On top of his pharmacy practice and volunteering, Orleans-Lindsay has a long-standing interest in global health. He completed a master’s degree in the field from McMaster University and has been a U of T doctoral student since 2015 in Kohler's lab. Kohler also leads the WHO Collaborating Centre for Governance, Transparency and Accountability in the Pharmaceutical Sector.

Orleans-Lindsay investigates the governance arrangements within and between state and non-state actors, with a focus on how those relationships affect access to quality-assured antimalarial medicines in Ghana.

“In Ghana, malaria accounts for about 40 per cent of all health facility outpatient visits and 27 per cent of hospitalizations, and the death of three children a day,” he says. “I hope my research will contribute to improving access to quality-assured antimalarial medicines in Ghana, which is still a challenge.”

While his community work and his research are very different, Orleans-Lindsay sees them both as connected under the umbrella of global health.