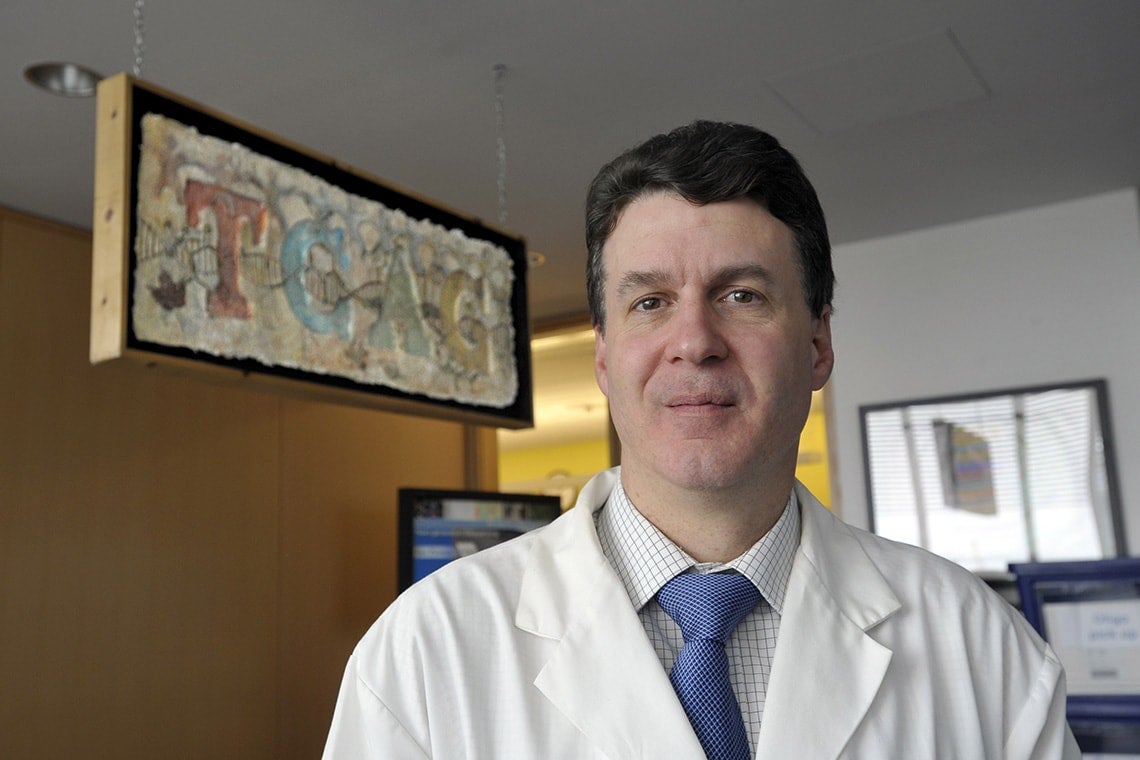 “Though we’ve identified clinically relevant genomic information for all participants, each of their genomes has even more information that we can’t interpret yet,” says Stephen Scherer, director of U of T's McLaughlin Centre (photo by J.P. Moczulski)

Researchers from the University of Toronto and the Hospital for Sick Children (SickKids) behind the Personal Genome Project Canada are predicting that whole genome sequencing will likely become part of mainstream health care in the foreseeable future.

In the first-ever study from the Personal Genome Project Canada (PGP-C), the researchers found 25 per cent of participants to date had genomic information indicating they could be at risk for future disease and even more were found to have genetic variants that would be relevant for family planning or newborn screening. All participants had genomic information associated with risks for adverse drug reactions or altered drug effectiveness, with 23 per cent of participants identified as being at risk for severe, potentially life-threatening adverse drug reactions.

The study was published Feb. 3 online in CMAJ (the Canadian Medical Association Journal).

PGP-C is a comprehensive public data resource that integrates participants’ whole genome sequencing data with their health information to advance scientific understanding of genetic and environmental contributions to human health and disease. All of the project’s inaugural 56 participants have clinically relevant information in their genomes, highlighting the potential of using whole genome sequencing data proactively for precision medicine and to reduce the risk of therapeutic failure.

“Though we’ve identified clinically relevant genomic information for all participants, each of their genomes has even more information that we can’t interpret yet,” says Stephen Scherer, director of U of T's McLaughlin Centre and senior scientist and director of The Centre for Applied Genomics (TCAG) at SickKids.

“As we analyze more samples, we continuously learn more about the human genome which will allow us to eventually take full advantage of the wealth of information it contains. That’s why the goal of the project is to sequence thousands of genomes each year.”

Participants were required to undergo an extensive consent process as all data, including results from their whole genome sequencing, combined with personal and family history, is available online. Each participant had access to genetic counselling to appropriately contextualize the results of their genetic testing.

“Genetic counsellors play an important role in communicating and interpreting these results appropriately,” said Professor Trevor Young, dean of  U of T's Faculty of Medicine, which runs Ontario’s only academic training program for genetic counselling. “The demand for these specialized skills is only going to rise given the massive increase in the number of genome-wide tests now being used in hospitals.”

The cost of whole genome sequencing has fallen dramatically since PGP-C began recruiting and analyzing samples in 2012 and further still from when the project was conceptualized in 2007. Signs indicate the technology will continue to become more affordable and accessible, which the authors expect will transform whole genome sequencing into more of a mainstream practice for the general population. As a result, frontline health-care providers may become involved in interpreting and delivering resulting genomic information in the near future.

The work was funded by the University of Toronto’s McLaughlin Centre, the Canada Foundation for Innovation, Genome Canada-Ontario Genomics, the Government of Ontario, the Canadian Institutes of Health Research (CIHR), Medcan Health Management Inc. and SickKids Foundation.

Read the full study in CMAJ