‘Partnership is the new leadership’: Urban experts come together for School of Cities symposium on governance 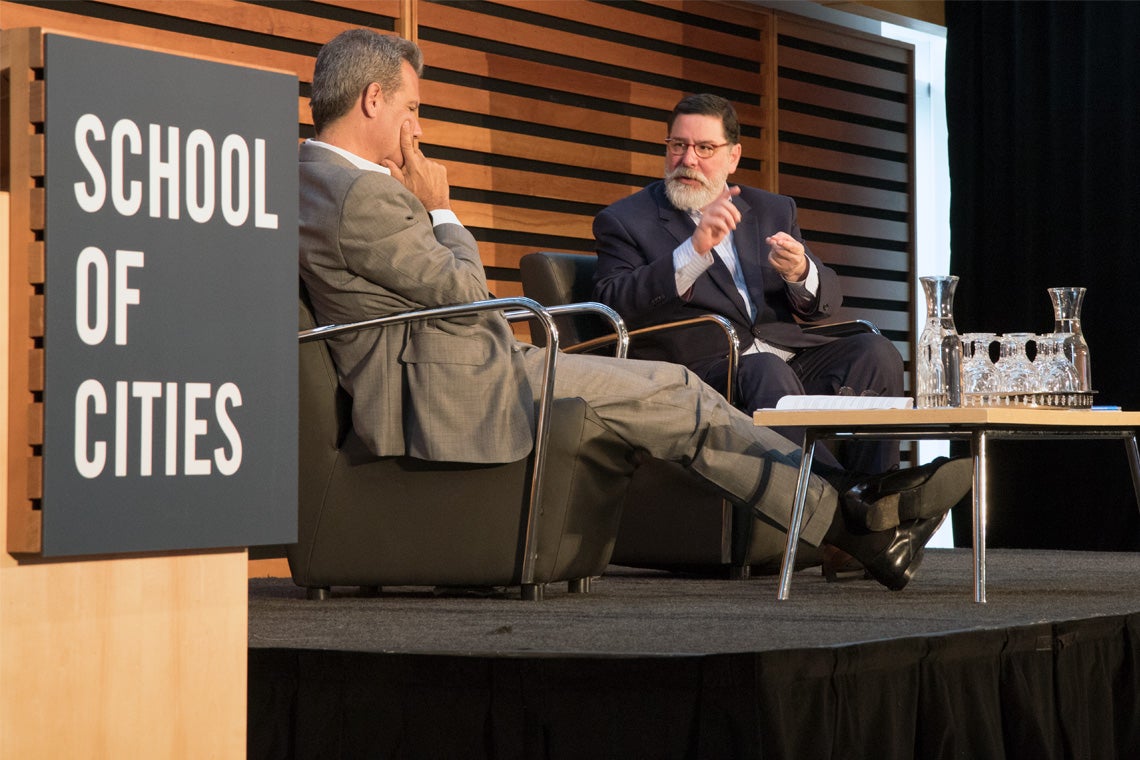 The future of cities is built on collaboration.

That is the thread that ran through a symposium on Tuesday hosted by University of Toronto’s School of Cities at the Toronto Reference Library.

The multidisciplinary school is nearing its one-year anniversary with a portfolio of accomplishments including the launch of new research and student-focused initiatives, and over 50 events organized with partners at the university and around the city.

Tuesday’s event, Governing Cities in the 21st Century, brought together experts from the GTA and beyond to discuss the changing role of governments in advancing municipal goals and aspirations.

Watch a video of the School of Cities event

“It's now clear that governance extends well beyond the walls of city hall,” said Matti Siemiatycki, the School of Cities’ interim director and an associate professor in the department of geography and planning in the Faculty of Arts & Science. “No organization today is governing the city on its own. They're working in deep collaboration across disciplines and across organizations in order to impact the type of cities that we're experiencing.”

The symposium featured two panel discussions, a keynote address by Michelynn Laflèche, vice president of strategy, research and policy at the United Way Greater Toronto, and a fireside chat with University Professor Richard Florida, the director of cities at the Martin Prosperity Institute, and Pittsburgh Mayor Bill Peduto. 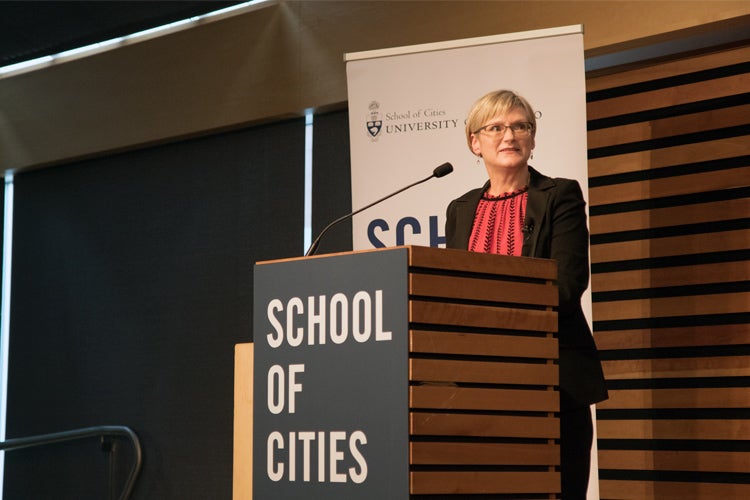 During her address, Laflèche (pictured above) spoke about rising inequality in Toronto. While the city consistently tops quality of life rankings, she said, it is also the income inequality capital of Canada.

“Now, compared to 35 years ago, you're much more likely to be in a ‘have’ or ‘have not’ neighbourhood,” she said, adding that the shrinking of the middle class means the gap between rich and poor is growing.

According to a new United Way report presented by Laflèche, certain groups of people are bearing the burden of this disparity.

Young people, for example, are more disadvantaged than ever before, she said.

“Our labour market has more precarious jobs in it so not only are young people starting off further behind, but they do not have the same opportunity for quality jobs that the previous generations did in order to catch up,” she said.

Addressing inequality will take place when different groups in the realms of public, private and non-profit work together, said Laflèche.

“Governing cities in the 21st century has to be about multi sector collaboration.” 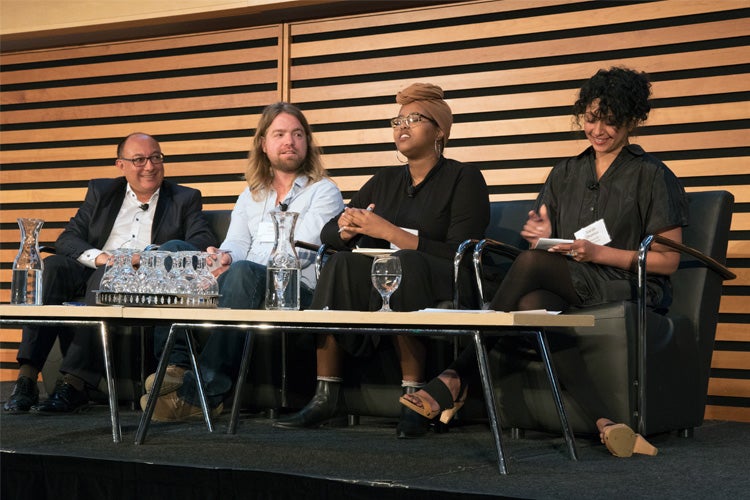 Good municipal governance extends into every aspect of city life – from the technology we use to the way public housing and health care are accessed.

During the first panel, Nasma Ahmed, director of the Digital Justice Lab, applauded San Francisco’s ban on facial recognition – using it as an example of a city that is taking the time to weigh the benefits and disadvantages of a technology.

“This was not the first of its kind, but one of many cities that are trying to grapple with emerging technologies,” she said.

As cities continue to expand and look for ways to address inefficiencies, these types of issues will continue to mount, said Marieme Lo, associate professor of women and gender studies and associate director of education at the School of Cities.

“The ecosystem of cities and governments is shifting – the ethos, the rationalities, the decision-making structures are all changing,” said Lo during the second panel discussion, which she moderated.

Making those decisions sometimes comes from bureaucrats taking a step back, said Jason Thorne, general manager of planning and economic development for the City of Hamilton.

“There's an aversion to that kind of risk-taking in the way we approach governance but I think that if we're going to be successful cities in the 21st century, we're going to have to accept the fact that a lot of the great innovations and ideas are going to come from all over the place and if we don't create space for that to happen, we are going to miss those opportunities.” 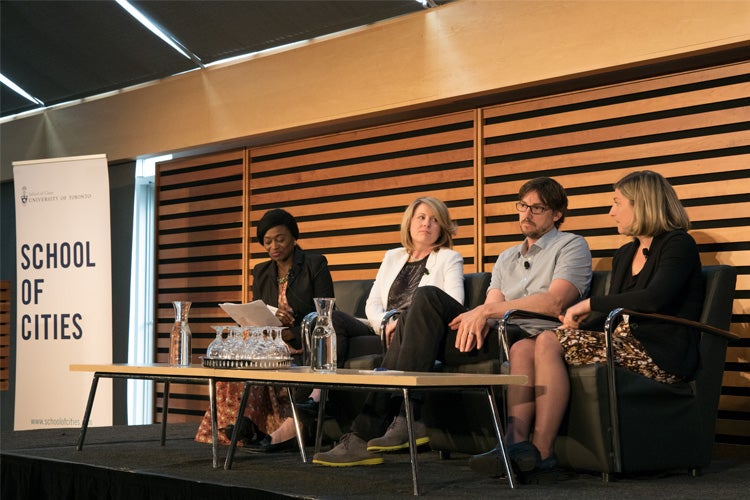 She uses the example of New York City’s High Line. When the project was in its early stages, TD took some convincing to sign on as the first corporate sponsor of the ambitious plan to transform an abandoned rail path into a public park.

Now one of the city’s most popular attractions, Barrack says the company was fortunate to have supported the project “before it was cool.” Now cities all over the world are looking to create “High Lines” of their own.

“The lesson in that is to really push through those small things because once you get it done and have a good case example, there's then lots of replication that can happen,” said Barrack.

The work required to make change in cities is important but challenging, she said.

“It's actually really easy to do the wrong thing and really hard to do the right thing, but that doesn't mean it's not important and worth the time and effort.” 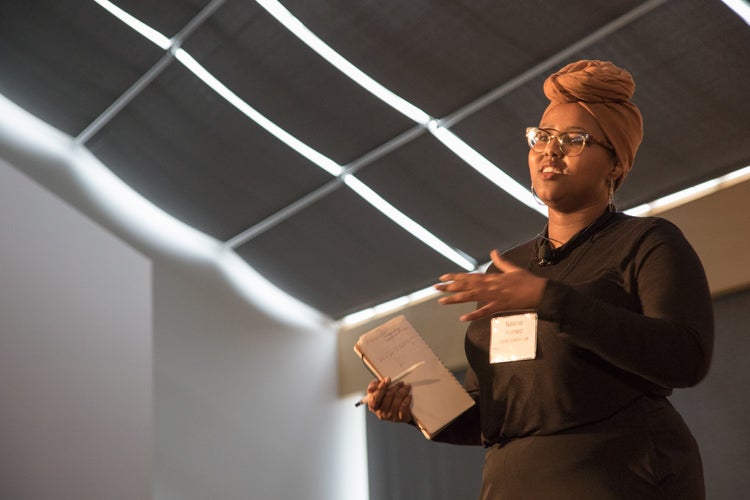 "We don't necessarily know what we're doing," said Nasra Ahmed, director of the Digital Justice Lab, of navigating emerging technologies, adding that it's an opportunity for groups to work together on solutions (photo by Romi Levine)

During a fireside chat, the symposium audience received valuable takeaways from Peduto on how collaboration and social responsibility play an important role in city building.

As mayor of Pittsburgh, Peduto has helped to transition the city from one plagued with post-industrial economic and environmental struggles to a thriving metropolis that is often hailed as an urban success story.

That success is driven by a new kind of economic model, said Peduto.

“In Pittsburgh we call it P4: people, planet, place and performance and that's how we measure what we are going to fund with government money,” he said. “Those should be the same standards we look at as an economic standard instead of seeing things like air pollution as externalities – they actually need to be put into the equation of what is true economic growth, not limited economic growth.”

Peduto reiterated the message heard throughout the symposium: collaborating with corporations, philanthropic organizations, community groups and institutions like universities is at the heart of effective city building.

When it comes to big issues, cities shouldn't shy away from playing an important role locally, nationally and internationally, said Peduto.

After U.S. President Donald Trump pulled out of the Paris Agreement on climate change, for example, Pittsburgh and cities across the country signed onto the agreement individually.

“It is at the local level where the world's problems will be solved.”