From paper aircraft to the real thing: U of T graduates develop next-gen drone 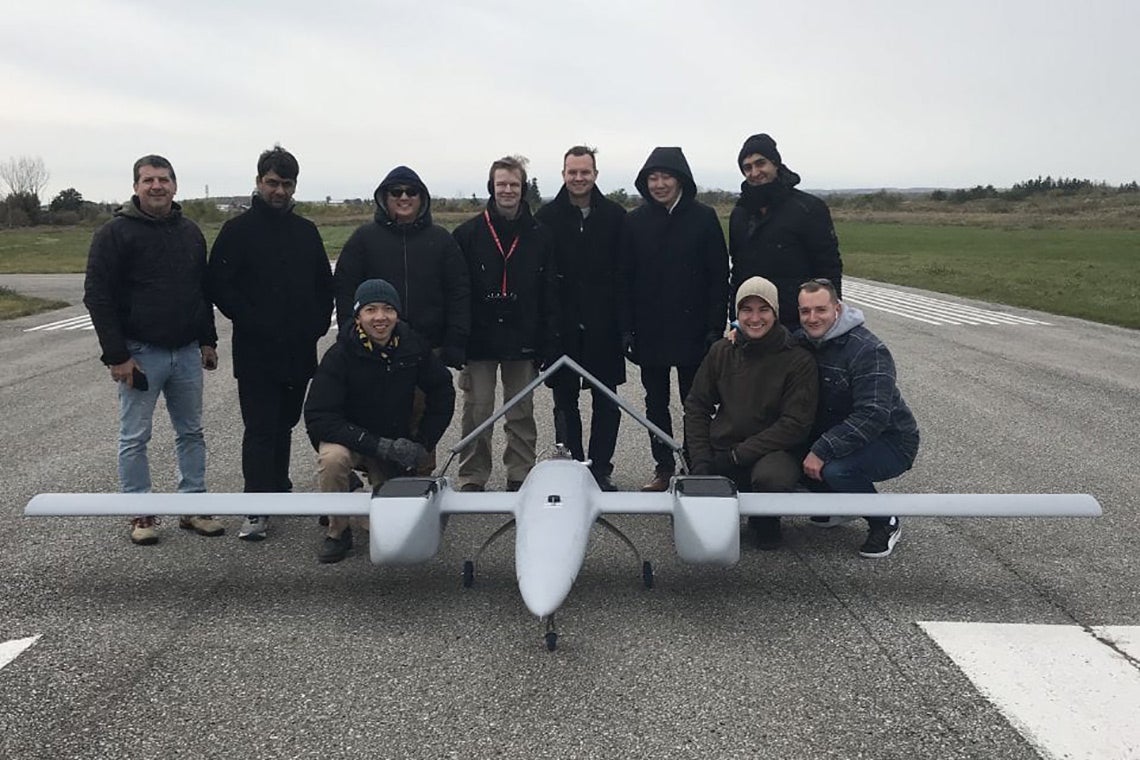 The DX-3 Vanguard is put to the test at Markham Airport. The hybrid drone features vertical take-off and landing, long-range communications and cloud-based analytics (photo courtesy of the Sky Guys)

Today, he’s leading a team of designers – including many fellow University of Toronto engineering graduates – to create and test an ambitious long-range drone capable of vertical takeoffs and landings.

In his first year as an undergraduate, Wang picked up a cleverly-designed paper airplane flyer from the University of Toronto Aerospace Team, or UTAT, at the engineering club fair.

“I distinctly remember thinking ‘I’m not interested in aerospace, I’m never going to use this,’” he says.

“But for reasons that I honestly don’t remember, I ended up going to their first meeting with a bunch of friends and thought ‘Wow! This is actually really cool.’”

Wang would eventually become the group’s executive director and lead a major expansion of the team. His work earned the attention of the New York-based Aviation Week Network, which named him to a prestigious industry list of future engineering leaders.

But it was his co-op position at The Sky Guys, a local drone company, that set him on the path to his current project. Now the firm’s chief technology officer, Wang and a nine-person team aim to design an unpiloted aerial vehicle, or UAV, that combines the best features of both fixed-wing and multi-rotor drones.

Traditionally, fixed-wing UAVs are optimized to fly long distances, but they require a long runway or launch rail to take off and land. By contrast, multi-rotor UAVs can perform vertical take-off and landings, but are less efficient for long-distance flying and have a shorter battery life.

The teams’ creation – the DX-3 Vanguard – features multiple rotors spread across a fixed-wing body making it capable of vertical takeoffs before transitioning into forward flight. The hybrid aircraft can theoretically carry a payload of up to three kilograms, stay aloft for up to 24 hours, and cover up to 1,500 kilometres before refuelling.

Wang says the prototype can communicate via radio, cellular or satellite signal. “As a pilot, you can be flying the DX-3 Vanguard in Toronto while the drone itself is flying on the west coast of Canada, and you can maintain connectivity over satellite link,” he says.

The drone is also equipped with a cloud-based data management system, allowing users to process, upload and view images and video data from the DX-3 on a secure platform.

Such a drone could be used for a wide range of applications. While Wang declined to provide details specific to the DX-3, he reveals that one of the Sky Guys' key partners is the Ontario Ministry of Transportation. The team was awarded a $750,000 innovation grant in 2017 to develop an artificial intelligence-enabled drone to perform highway enforcement tasks. These could include determining the number of passengers in high-occupancy vehicle lanes, tracking the speed of drivers or monitoring road conditions.

Current federal regulations prohibit drones from flying beyond line-of-sight without a special permit, but Wang remains optimistic regulations will change in the near future. The team has begun early-stage testing of the DX-3 within visual range at Markham Airport, north of Toronto, with plans to test equipment without line-of-sight in the future. The prototype drone can communicate via radio, cellular or satellite signal, potentially allowing the operator to fly from the other side of the country (photo courtesy of Sky Guys)

So far, the team has evaluated basic functional and performance characteristics, including conventional takeoffs and landings, payload envelope and communications. But the biggest challenge the team had to overcome was human in nature.

“Aerospace engineering involves so many disciplines that have to work together in unison – mechanical, electrical, flight operations, etc. – without necessarily understanding what each person is doing,” says Wang.

“The challenge was nailing that interdisciplinary coordination.”

In addition to Wang, the team includes alumni Lucais Kwon, Carl Pigeon, Carson Dueck, Hussein Khimji and Thomas Ulph, many of whom were also involved in UTAT.

“I think this team is a testament to U of T engineering,” Wang says. “The faculty provides a very solid and rigorous academic foundation, but also a very rich co-curricular environment where you can join design teams, take part in competitions and supplement theory with experiential learning.”

“It’s also kind of nice to have that continuity between friends you meet in university and the people you spend most of your day with,” he adds.

“It’s what I’m most excited about when I come to work every day.”