Once caught up in Trump's travel ban, U of T grad builds health information system for Syrian hospitals 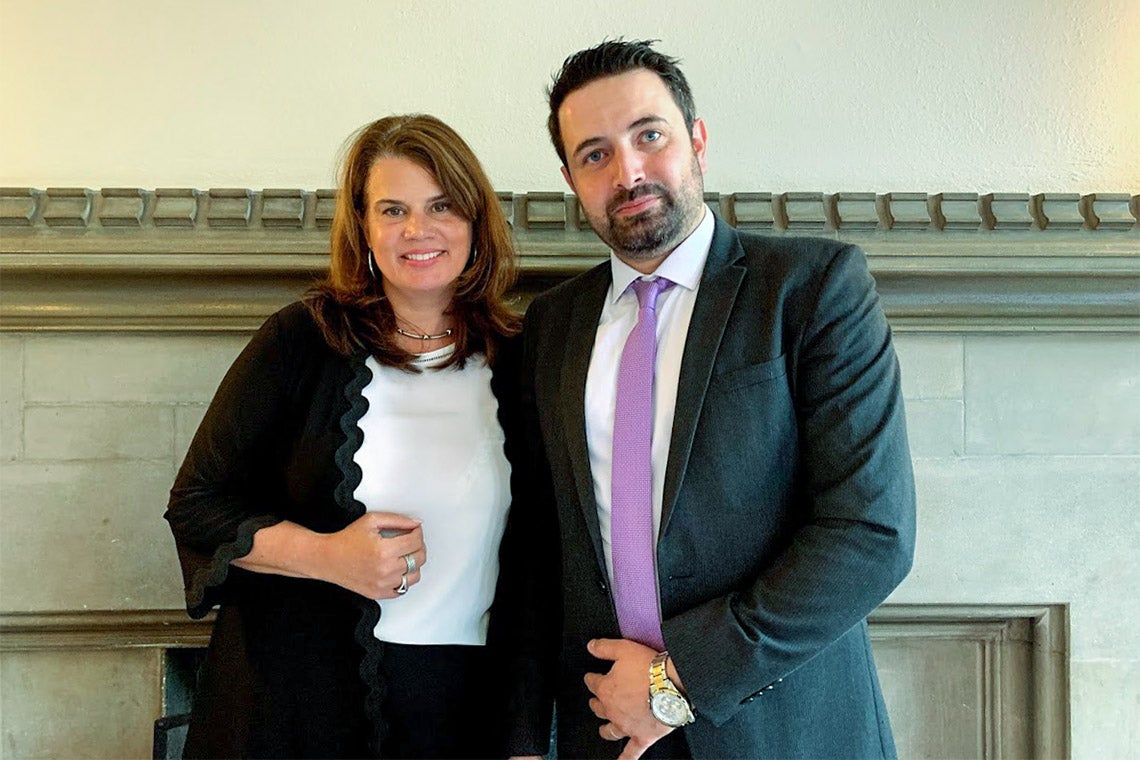 Khaled Almilaji, who was unable to complete his studies in the U.S. because of Trump's travel ban, and Julia Zarb, an assistant professor, teaching stream, at U of T's Institute of Health Policy Management and Evaluation (photo by Rebecca Biason )

Two years ago, Khaled Almilaji, a Syrian physician and humanitarian, was caught up in the U.S. travel ban and unable to return to his public health studies at Brown University or to his pregnant wife Jehan who was still in the United States.

But with the help of external donors Almilaji came to Canada and was accepted into the Executive Master of Health Informatics (EMHI) program at the University of Toronto’s Institute of Health Policy Management and Evaluation (IHPME) at the Dalla Lana School of Public Health.

This month he graduated with a humanitarian health informatics project in Syria under his belt, and a second project well underway.

“I feel so lucky and happy – almost like it was meant to happen,” said Almilaji.

“I was able to change my focus from general public health into a focus on health informatics, which has helped me create a meaningful and helpful system for the health system in Syria.”

In 2014, Almilaji along with colleagues Jay Dahman and Mark Cameron, founded the Canadian International Medical Relief Organization (CIMRO), an organization that provided medical supplies and training to health-care workers on the front lines of Syria’s conflict zone. While Almilaji and his colleagues have already received the Governor General’s Meritorious Service Medal for their efforts, Almilaji wanted to continue his work in Syria while completing his degree.

As part of the EMHI program, students are required to complete a capstone project that consists of over 400 hours of work and is supervised by an IHPME faculty member. Almilaji’s project spanned international borders with a goal of implementing an online health information system for hospitals in Syria’s war zone.

“I wanted to customize a cloud system tool for a Syrian context and bring together stakeholders from the crisis in Syria who are working to deliver health-care services for their input and approval, and to show them that a solution was possible,” said Almilaji.

With the collapsed health-care system in Syria’s northern region, many health-care services are now being provided by non-governmental organizations. Almilaji wanted to empower these providers by allowing them to co-ordinate better service with a central hub for patient information.

The cloud tool Almilaji has customized allows patient data to be uploaded into a shared online system that’s easily accessible by NGOs across the region. Patient records and important health data are protected, particularly when the NGOs – or the patients themselves – are required to relocate quickly or come under fire during bombing attacks.

Almilaji received funding from the World Health Organization that has allowed him to implement the project as a pilot in 18 different hospitals across the region, while also providing training for staff.

“Khaled’s project embodies the value of health informatics within international health systems, and particularly within humanitarian contexts,” said Julia Zarb, who was the project’s supervisor and is an assistant professor, teaching stream, at IHPME.

“Because of Khaled’s deep knowledge of the barriers and opportunities related to managing patient data within the conflict-challenged Syrian health system, he has been able to maximize the usefulness of his digital intervention while requiring the least change necessary for effectiveness.”

In addition to his program project, Almilaji has set his sights on building a second module that will track immunization data in Syria, a project close to his heart. In 2013, a rampant polio outbreak spread across the country. With the help of CIMRO and thousands of health-care workers going door to door, Almilaji led a successful vaccination program to inoculate over 1.4 million children.

“So far this second project has been a success. We want to improve access to vaccines for children in the area, and an online system will help us collect data from multiple organizations and for multiple infectious diseases,” said Alimilaji.

Almilaji is also keen to put his experience in the program and his knowledge in health informatics to work with health-care institutions within Ontario, with his family having made Toronto their home.

“I have gained such a tremendous amount of knowledge from the EMHI program and my peers,” said Almilaji.

“I wish all of my cohort the very best, we have done an amazing job in our efforts to improve health care.”