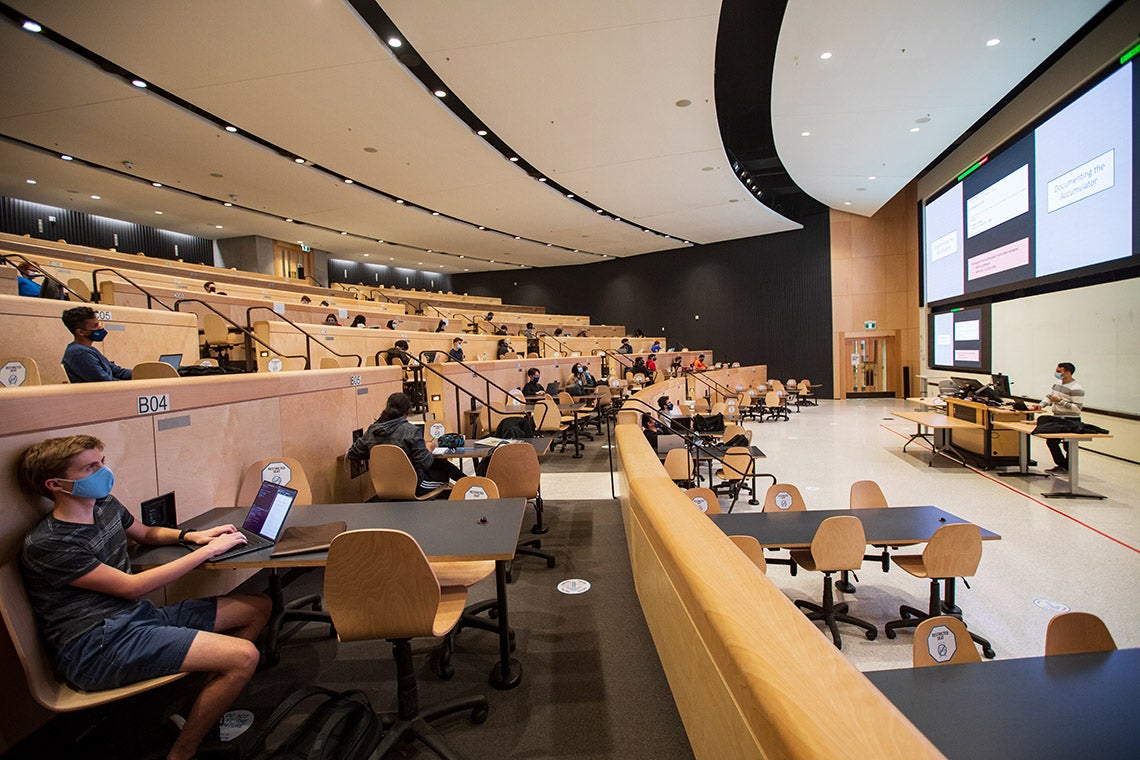 With precautions such as mask-wearing, physical distancing and a vaccination requirement in place, students attend an in-person class at U of T's Myhal Centre for Engineering Innovation & Entrepreneurship this week (photo by Johnny Guatto)

The University of Toronto kicked off its fall semester this week – with many students attending in-person classes for the first time in nearly 18 months.

With precautions such as mask-wearing, physical distancing and a vaccination requirement in place, students crisscrossed the St. George campus on Thursday carrying backpacks, travel mugs and textbooks.

For some, it was their first time at the university.

“I’ve been going to the same school for a long time, so it’s nice to make new friends,” Cini said.

She added that it was also nice to have a change of scenery, having spent much of the previous year at home with her twin sister and the rest of her family.

For Rebekah Choi, Femi Akinduro and Selina Chen – all fourth-year students in the Faculty of Kinesiology & Physical Education – the first week of classes on St. George was an occasion for informal reunions with old friends.

On the way out of nutrition class at Sidney Smith Hall, friends wished Chen a belated happy birthday.

While Choi says she misses the convenience of attending class from her bedroom, she enjoys being able to see her friends again. 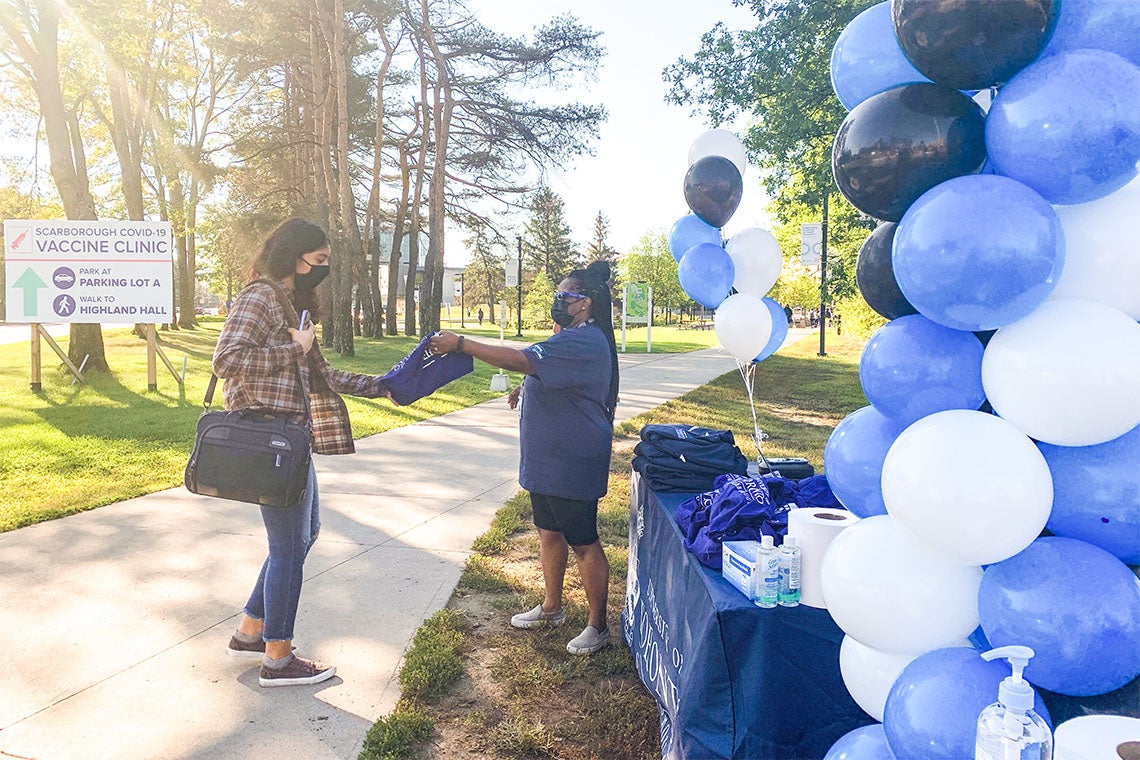 Raissa Shrestha and Kulsum Manji, both in fourth-year biology, caught up after months apart outside the Myhal Centre for Engineering Innovation & Entrepreneurship while waiting for their first lecture.

“It’s a little nerve-racking, but exciting at the same time,” Shrestha said. “We have been talking and texting a lot, but it’s nice to sit down and talk like this.”

Manji, for her part, was looking forward to once again studying at the centrally located Gerstein Science Information Centre, where she can fit in some studying without worrying about rushing to her next lecture.

At U of T Scarborough, students not only saw their friends and professors again when classes resumed on Tuesday – they were also greeted by the campus's Rex the Raccoon mascot and a booth decorated with balloons where they could pick up U of T apparel. 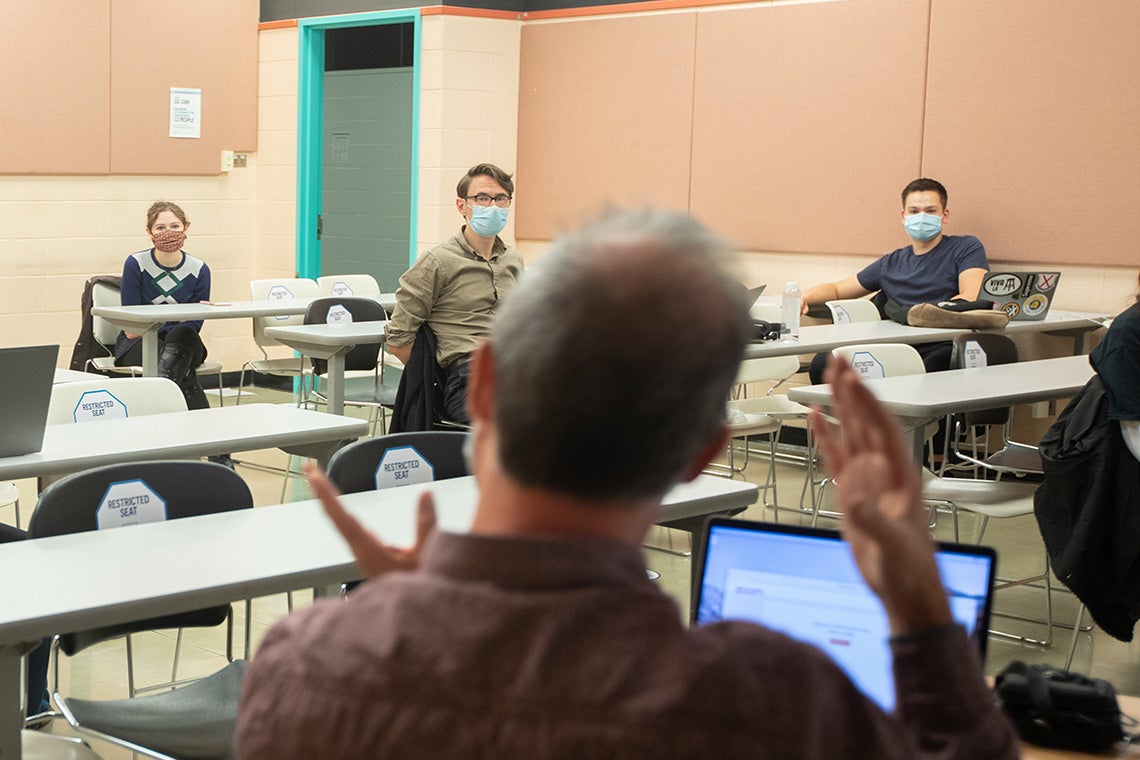 Students wear masks and are physically distanced from one another during a class on the St. George campus (photo by Johnny Guatto)

At the U of T Mississauga campus, where the fall semester kicked off on Wednesday, Saad Sultan was just starting to get to know the university – and the city – after moving to Canada from Pakistan via the United Arab Emirates.

Sultan came to U of T after graduating from New York University Abu Dhabi in mechanical engineering and is pursuing a master’s degree at the Institute for Management & Innovation.

He settled on the program after researching the university and the post-graduation careers of its alumni.

“That’s when I decided U of T ticked every single box I had in my mind,” he said, adding that he was impressed with the modern architecture on campus and the surrounding forest. 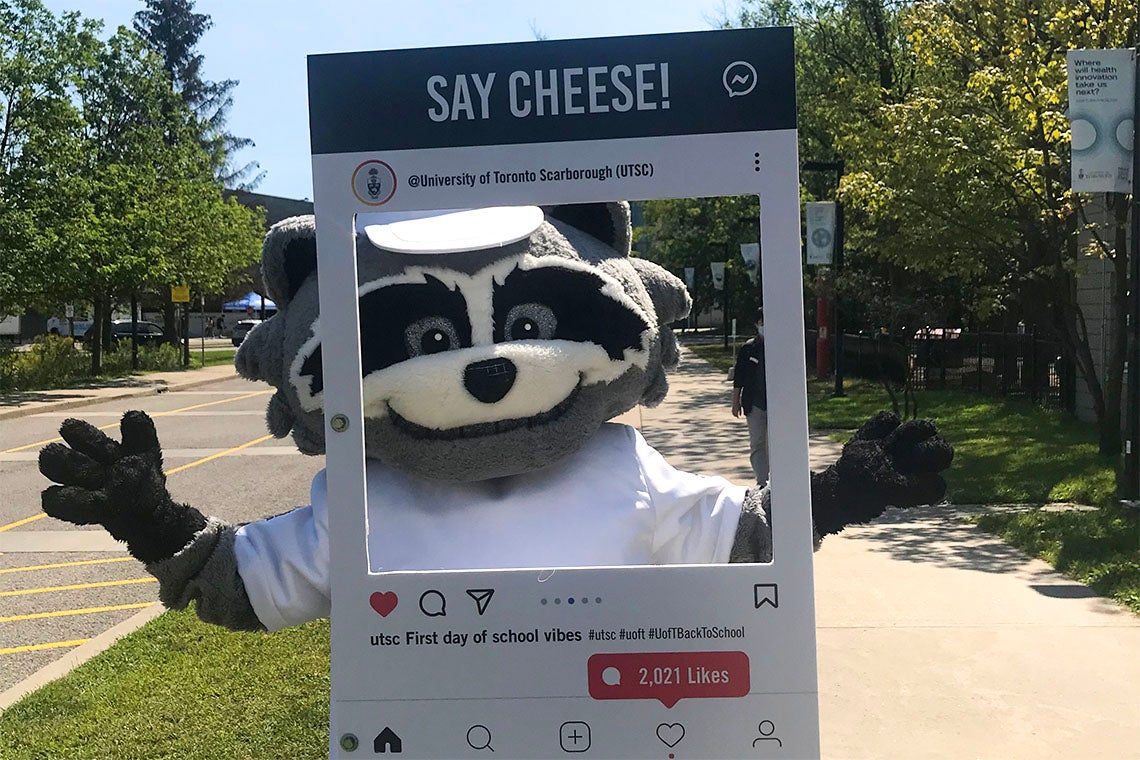 Rex the Raccoon, U of T Scarborough’s mascot, was on hand to greet students and take a photo (photo by Raquel Russell)

After just three days of the new semester, Sultan said he had already met and chatted with each of his classmates in his small program of 27 students.

“Everyone has so much to offer. Everyone is super nice, super helpful,” he said. “I’m super glad that I’ve finally been able to meet my classmates after interacting online with them throughout the summer.”