Office of Indigenous Initiatives launched at U of T Mississauga 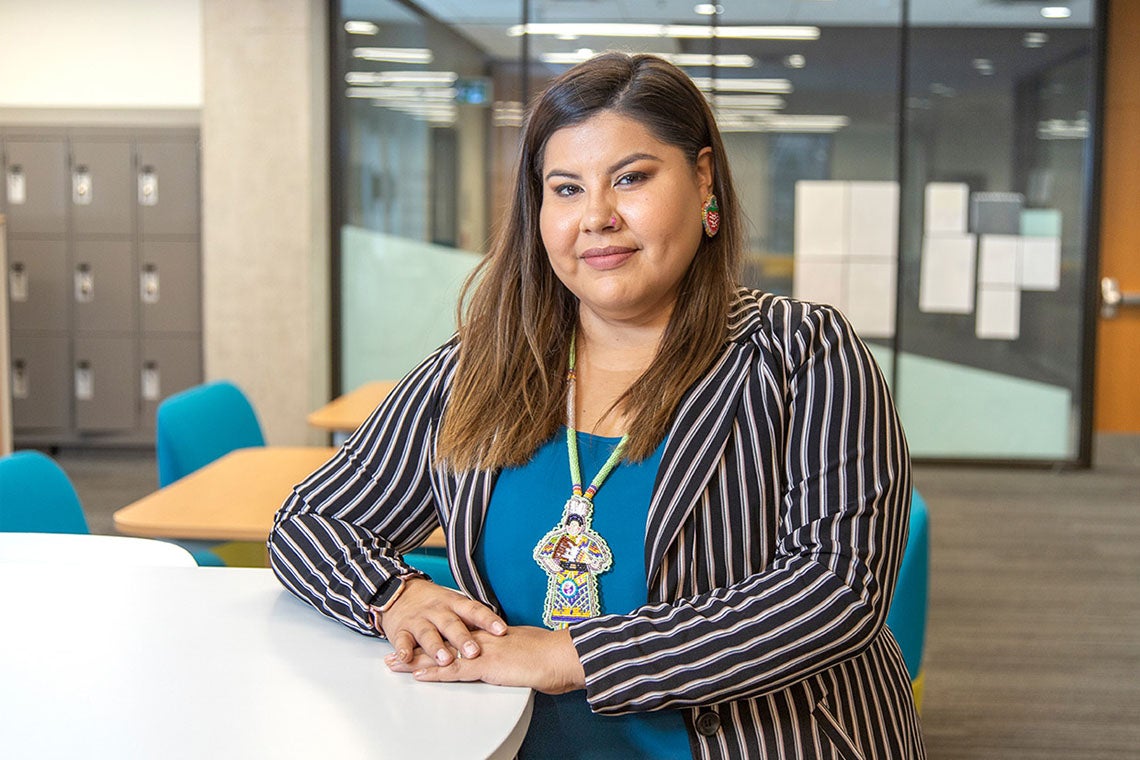 Tee Duke, director of U of T Mississauga's Office of Indigenous Initiatives, aims to expand the university’s appeal to a broader audience from Indigenous backgrounds and foster a stronger relationship with Indigenous communities (photo by Drew Lesiuczok)

You can’t miss it – and that’s the point.

The new tipi erected in the green space outside of Maanjiwe nendamowinan (MN) is part of the University of Toronto Mississauga’s commitment to placemaking and raising the profile of the Indigenous community on campus.

The tipi can also be seen from inside Maanjiwe nendamowinan, on the sixth floor where – less visible but no less important – U of T Mississauga has launched its first independent Office of Indigenous Initiatives (OII-UTM).

The mandate of the new OII-UTM is to expand the university’s appeal to a broader audience from Indigenous backgrounds and foster a stronger relationship with Indigenous communities.

Table member Tee Duke has been named as the OII-UTM’s director.

“OII-UTM will work to support Indigenous students, staff, faculty and librarians at UTM as well as inspire future Indigenous students to a welcoming and inclusive UTM community,” says Duke, who is a member of Niisaachewan Anishinaabe Nation in Treaty 3 Territory – Northwestern Ontario. “We will continue to promote equity and inclusion of Indigenous people among students, staff, faculty, librarians and throughout the campus.

“I know how much of a privilege it is to represent my community in various capacities. My long-term vision has always been centered on not only amplifying Indigenous community voices but increasing Indigenous presence and this can come in many forms – placemaking, language and culture to name a few.”

The OII-UTM, which includes Jessica Tabak, Indigenous student support specialist, signals U of T Mississauga’s increasing commitment to Indigenous initiatives and a move forward on goals to meet the Final Report of the Steering Committee for the U of T Response to the Truth and Reconciliation Committee of Canada, titled Answering the Call: Wecheehetowin.

“Having a direct link to the VPP for the office’s mandate means we have a seat at the senior table to amplify Indigenous community voices while sharing supportive approaches on how we can continue to work together to build and maintain positive relationships with one another,” says Duke.

Gillespie praised Duke and the new office during the October Campus Council meeting, calling it a key component in U of T Mississauga’s goal to “do better by committing to what matters most – kindness and honesty in all our relations.”

“The change reflects UTM’s Strategic Framework [goal of] Truth, Reciprocity and Indigeneity and to centre the call to action of Wecheehetowin,” said Gillespie.

Since the release of Answering the Call: Wecheehetowin in 2017, U of T Mississauga has strengthened its commitment to deepen reciprocal relationships with Indigenous communities.

“This new office not only re-establishes UTM’s commitment towards the Calls to Action but emphasizes and supports the importance of autonomous Indigenous leadership,” says Duke. “I hope the new office draws more relationship-building opportunities with the broader UTM and external community because it is also an example of how we are working towards decolonization at UTM.”

Among its many recommendations, Wecheehetowin (a Cree word meaning ‘working together’) urges the expansion of Indigenous spaces, faculty, staff and students, curriculum and co-curricular education, research ethics and community relationships across the university’s three campuses.

It also encourages the expansion of leadership roles for members of the Indigenous community, and Duke says she hopes her appointment will encourage others to explore the opportunities.

“I recognize being in this role challenges the colonial narrative while paving the way for future Indigenous leaders/roles at the institution and Indigenous leadership positions are important especially to our young people/Indigenous students,” she says. “Seeing their community members in these roles emphasizes that they can be in similar positions as well – that we are strong and resilient.”

Duke says her initial priorities as the OII-UTM director are inspired by the Call to Action’s emphasis on using physical space to create “the right environment” to ensure the recruitment, retention and flourishing of Indigenous people on U of T’s campuses.

The tipi, created during this fall’s annual Indigenous Orientation Meet and Greet, will be in place until April 2023 and will be used for ceremonies, teaching and programming.

Also on the list of OII-UTM priorities is the planning of U of T Mississauga’s inaugural Pow Wow in 2023 and hiring a special projects officer in the hopes of widening the Indigenous community’s profile on campus and deepening its relationships.

“I am excited for what paths lie ahead for us – our community here at UTM,” says Duke. “I would like to re-emphasize that all students, staff, faculty and librarians are welcome to attend programs and events associated with the OII-UTM /Indigenous Centre, whether they are of Indigenous ancestry or not. OII-UTM will continue to work closely with the U of T/institutional Office of Indigenous Initiatives within the Division of People Strategy, Equity, and Culture and the Office of the Vice-President and Provost on institutional wide priorities to meet the goals outlined in Answering the Call: Wecheehetowin.”