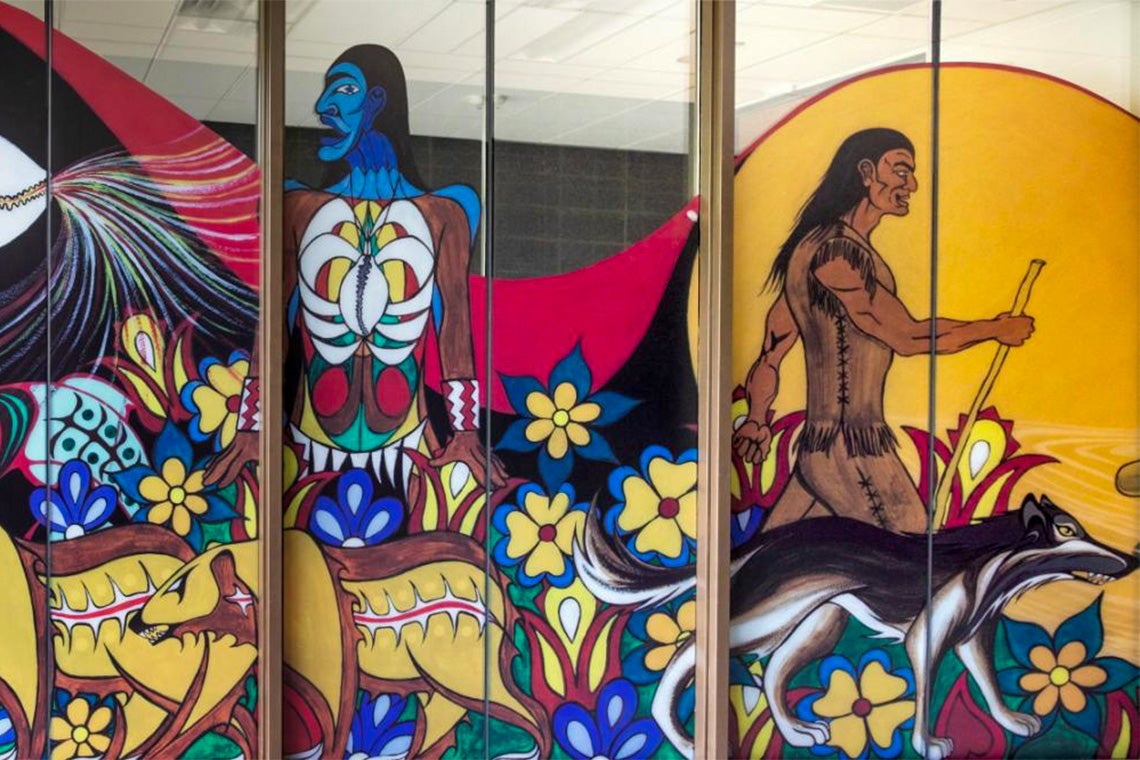 The Mississaugas of the Credit First Nation and the University of Toronto Mississauga (MCFN) have reached a new milestone on the path to reconciliation: an MCFN office on campus.

The office, which opened last month, is located on the second floor of Maanjiwe nendamowinan, a building housing multiple social science and humanities departments that was named by the MCFN and means “gathering of minds.”

U of T Mississauga is situated on land that falls under the provisions expressed in Treaty 13-A and is the traditional land of MCFN as well as the Huron-Wendat and the Seneca.

“I give special recognition to UTM for constructing a physical office space for the Mississaugas of Credit,” says MCFN Councillor Veronica King-Jamieson, who is the community’s pillar lead for education and awareness.

She says this development helps with “recognizing the urgent need to respect and promote the inherent rights of Indigenous Peoples, which derive from their political, economic and social structures and from their cultures, spiritual traditions, histories and philosophies, especially their rights to their lands, territories and resources.”

The office will provide MCFN council members with a space to conduct their business, which includes planning and executing research, teaching and collaboration work at U of T Mississauga. The activities include sharing Indigenous Knowledge through the second-year undergraduate course called “Anthropology and the Indigenous Peoples of Turtle Island” (ANT241H). The community-engaged earning course features Anishinaabe scholars and Elders delivering land-based workshops and field trips that illuminate the history of the local Indigenous presence and ways of life in the region.

The office opening is the latest in a series of steps taken by U of T Mississauga in recent years to strengthen its relationship with the MCFN. Other steps have included opening the Indigenous Centre in 2017, hiring more Indigenous faculty members, supporting more Indigenous-focused research and Indigenizing curricula. 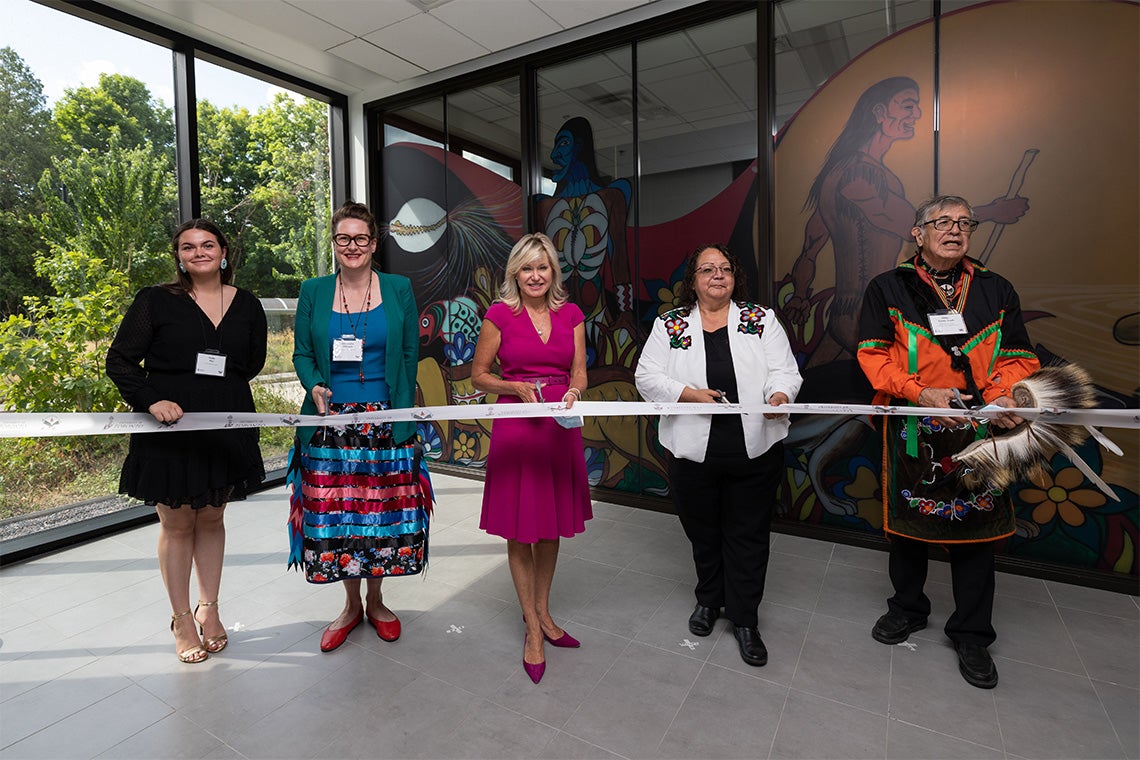 “I’m grateful to the Mississaugas of the Credit First Nation for their continued friendship – and I’m excited about all we can do together here, at UTM,” says Alexandra Gillespie, vice-president and principal of U of T Mississauga. “We’ve placed truth, openness, and reciprocity at the core of our Strategic Framework. Our commitment to these values will guide everything we do as a campus. As part of our Strategic Framework accountabilities, we’ll continue to seek new opportunities to embed anti-colonial and Indigenizing initiatives across campus life.

“This office is a tangible step in our ongoing commitment to deepening reciprocal relationships with Indigenous communities.”

U of T Mississauga’s recognition and inclusion of the MCFN is also a priority for Sherry Fukuzawa, an assistant professor, teaching stream, of anthropology at U of T Mississauga, who is a founding member of the Indigenous Action Group, an alliance between U of T Mississauga faculty, staff and MCFN members. The group aims to honour the MCFN’s educational goals of truth through public knowledge, recognition of history and reconciliation by adapting Indigenous knowledge systems to the university space. Fukuzawa was among the group’s members who advocated for U of T Mississauga to create an on-campus office space for the MCFN.

“It's a step in the right direction that goes beyond tokenism,” Fukuzawa says. “I hope that the space has autonomy for the community … to create and promote their educational initiatives.” 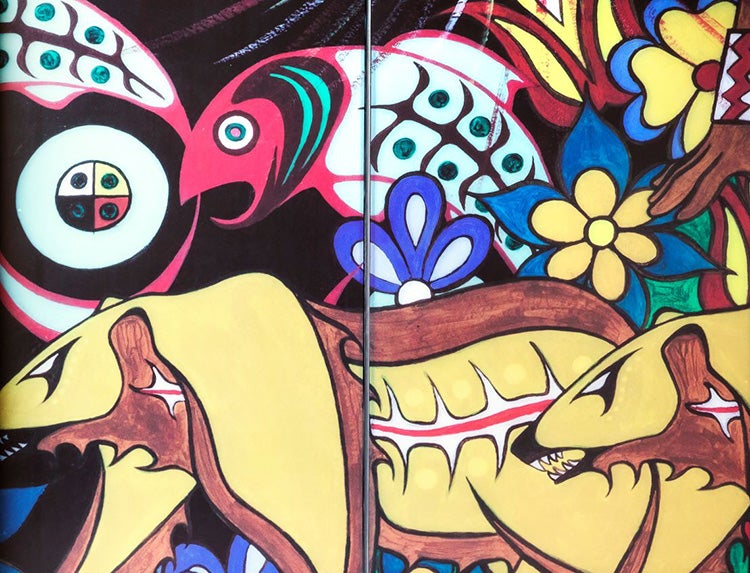 A mural titled Kiinwin Dabaadjmowin, or “Our Story,” depicts the creation story of the Anishinaabe people (photo by Nick Iwanyshyn)

The first thing anyone passing by the office will notice is a window mural called Kiinwin Dabaadjmowin, or “Our Story.” It depicts the creation story of the Anishinaabe people. Commissioned by the MCFN and created by Indigenous artists Philip Cote and Tracey Anthony, the acrylic artwork also reflects the life of Indigenous Peoples before, during and after colonization. It’s a reminder of a fraught historical journey faced by Indigenous Peoples in Canada, but also signals a promising new chapter of Indigenous inclusion at the university.

“I hope the MCFN office is the beginning of how UTM, and U of T at large, will establish more opportunities for Indigenous place-making and creating a stronger Indigenous presence at the institution,” says Tee Duke, assistant director, Indigenous Initiatives at U of T Mississauga.

For MCFN Elder Garry Sault, U of T Mississauga’s welcoming of the MCFN to campus helps to build a bridge between the vast cultural knowledge of its community and learners who have yet to discover an important and almost-extinguished part of history in Canada.

“It is a wonderful opportunity for higher education to recognize our First Nation and to be able to share in our ongoing story of truth and reconciliation,” Sault says. “It is important to have actual people at the university who will be utilizing the information that we provide so that future generations of colonial entities will be able to glean a clear picture of how the First Nations lived in the past and are moving forward in the future."