'Now is the time': Maydianne Andrade on elevating Black people in STEMM 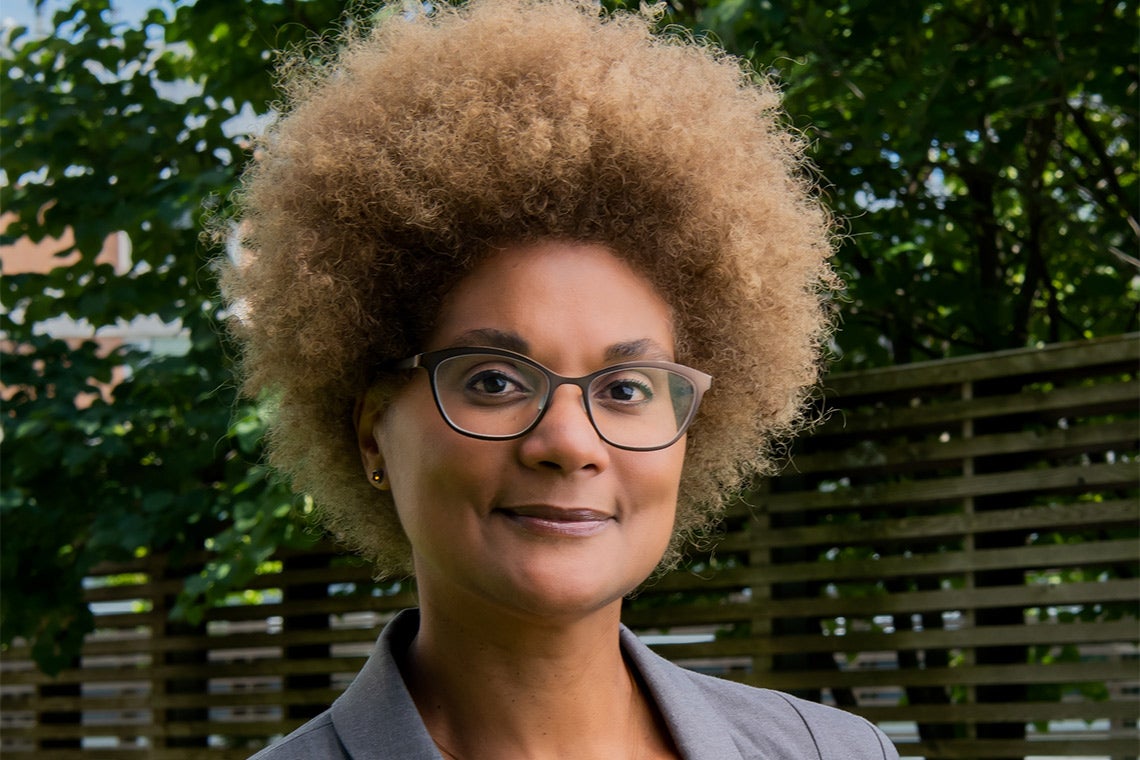 Maydianne Andrade, a professor of evolutionary biology at U of T Scarborough, co-founded the Canadian Black Scientists Network three years ago (photo by Dylan Toombs)

The underrepresentation of Black people in science, technology, engineering, mathematics and medicine (STEMM) is a persistent problem in Canada – and a missed opportunity for talent and perspective in the research community.

From overt discrimination and microaggressions that undermine confidence, to feeling isolated and unsupported in an environment that offers few opportunities to meet other Black scientists who could be mentors or collaborators, Black people often face obstacles from the time they are students through to the highest ranks of STEMM professions.

In 2020, a group of volunteers formed the Canadian Black Scientists Network (CBSN) to “Elevate, Make Visible, Celebrate and Connect Black Canadians” in STEMM. They included Maydianne Andrade, a professor of evolutionary biology at the University of Toronto Scarborough, whose “day job” is figuring out how widow spiders can be a model for how species will adapt to the changing climate.

Since then, the network has accomplished a great deal, including registering hundreds of members.

The Canada Foundation for Innovation recently spoke to Andrade, the CBSN’s co-founder and first president, to find out more about what the network is doing now, and about its vision for the future.

The Canadian Black Scientists Network held its first meeting in July 2020. What led to that?

A small group of people had been discussing the challenges and underrepresentation of Black Canadians in STEMM for many years. Most of us were “the lonely only” in our departments or even on our campuses, struggling alone to try to effect changes and make the academy more welcoming for Black colleagues.

For much of that time (for me, 20 years or so), most of our colleagues did not recognize that there were particular barriers for Black scholars based on pervasive negative stereotypes. Attempts to discuss underlying inequities were commonly met with “I don’t see colour” or “Why are you making it all about being Black?” I would say this is particularly true in the sciences, where many denied the existence of bias.

Then George Floyd’s murder in June 2020 changed everything. Suddenly our colleagues were asking about barriers and recognizing that Black Canadians have a very different experience from the one they expected, including experiences in research and innovation.

Professor Tamara Franz-Odendaal, who is the NSERC Chair for Women in Science and Engineering (Atlantic) at Mount Saint Vincent University, finally said, “Now is the time,” and she worked with Professor Juliet Daniel from McMaster University to circulate a Google doc sign-up sheet. Tamara and Juliet, Professor Loydie Jerome-Majewska from McGill, Professor Kevin Hewitt from Dalhousie, and I, took that list and created the Canadian Black Scientists Network, pulling together our first meeting in July 2020.

The CBSN has accomplished a great deal since it started: hosted a conference (and will host a second conference for February 2023), organized a science fair and registered hundreds of members. What is the one thing so far that energizes you the most?

The response from young people is the most energizing. We get tears of relief, expressions of joy and hope where we are told there was just anxiety before. People have shared images of their children watching the conference online.

More recently, it is the stories from Black professionals in STEMM who were going to give up on a career in research and innovation because doors were shut to them. But through mentorship and opportunities at our virtual career fair, some of them now have new career paths.

If I were to ask you that question again in five years – what are you most energized by or proud of – what would you hope to answer?

That Black people have become a part of the fabric of the Canadian research and innovation landscape to such an extent that I never again hear from anyone “hiring diverse candidates means sacrificing excellence.” That the automatic assumption of deficits is replaced with a widespread appreciation for the value of diverse talents and passions that are not correlated with skin colour.

The CBSN sets out to “Elevate, Make Visible, Celebrate and Connect Black Canadians” in science, technology, engineering, math and medicine, which means increasing the number of young Black people entering and staying in these fields, as well as advocating for equitable practices in funding. Does any of that ever feel overwhelming?

Yes. All of it is overwhelming. All of us leading the network are volunteers with full-time careers elsewhere. In effect we have two jobs, and many of us have other service organizations we support, so, in fact, we have three. (In my case, the third job is the Toronto Initiative for Diversity & Excellence, a group I founded in 2016.)

It is exhausting. We have many ideas for how to correct problems that we did not create. But to make these things happen, we need to not only build programs from scratch, but also apply for multiple grants every year to continue to operate, while also doing everything from updating our website, to documenting our invoices, to giving talks to tri-agency executives, and mentoring our members. And this is in addition to our day jobs. We are told repeatedly that Canada does not have a way to support our sustained operation given the way that federal budgets currently work. So it is a treadmill.

My greatest fear is that we will not be able to sustain this level of effort, and the CBSN and all of the wonderful things it has started will become a “remember when.”

A couple of years ago, you were part of a panel on the subject of Black scientists, science and systemic racism. You said you sometimes get frustrated because we’ve known what we need to do for a long time – collect data, develop programs, educate decision makers, set targets and incentivize those targets – but that we just need to do it. What stands in the way?

What stands in the way? A few things. First, people who are willing to speak the words, but not connect them to actions (the problem of passivity and lack of accountability).

Second, people who see the data about racism and bias, but refuse to connect that to changes in practices, either because “That’s not how things work” or because “That’s not a problem in my context! We are really inclusive in my department/campus/institution” (the problem of separation).

Third, people who are in power who fear making mistakes or upsetting others who are also in power, and refuse to acknowledge that some of that power comes from their identity. These are leaders who put a priority on ensuring that those in power do not feel threatened by the reality that the current system excludes and crushes the hopes and dreams of many with equal talent.

Every single thing about this is frustrating. Canada cannot afford to let bias and racism lead to a loss of talent, particularly in the current context of a labour gap, a skills gap, pandemic economic recovery and a need for innovation, and yet many refuse to change even when they are shown how the current system is pushing Black people out, from school-aged onwards.

A love of STEMM can start so early in life. What would you say to Black kindergartners about science?

Science is like art that allows you to answer so many questions you have about the world. It is like a superpower. It is creative – you ask a question, then imagine possible answers and also how to figure out which answer is most likely. It’s like solving puzzles every day, and it is deeply satisfying.

What advice would you give to someone who wants to be an ally for what the CBSN has set out to do?

Engage with us. Come to our events. We are not seeking an echo chamber and we are not seeking sympathy. We want to introduce you to the diverse array of incredibly talented and innovative Black people in our network who have a passion for STEMM and we want you to know we are here – even if you don’t see us in the hallways of your institutions. We want you to ask your colleagues and your leaders why we are missing. And every time you hear “hiring for diversity is sacrificing excellence,” we need you to speak up, because we are not in those rooms (yet).

This story originally appeared at the Canada Foundation for Innovation.