‘This is not a normal year’: U of T’s Vivek Goel on how to safely enjoy Thanksgiving, Reading Week 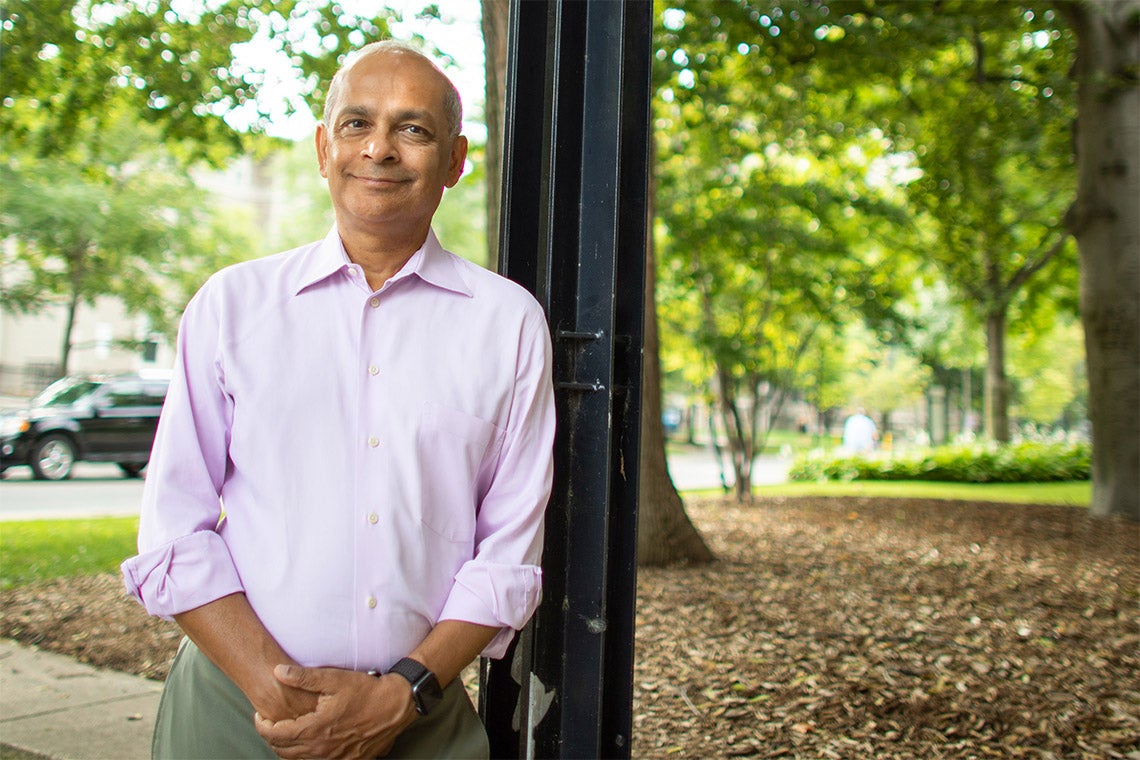 With fall Reading Week and Thanksgiving around the corner, University of Toronto students may be tempted to attend large gatherings of friends and family.

But public health authorities – and U of T’s Vivek Goel, a renowned public health expert and a special adviser to the president and provost who is helping guide the university’s pandemic response – warn that more social contact could amplify the second wave of COVID-19 and increase community transmission.

“This is not a normal year, when you can go home and see your friends and relatives that you left back in August,” he says.

Instead of in-person get-togethers, Goel suggests getting creative by hosting a virtual dinner or playing games online.

As the rate of positive tests creep up in Toronto, the government has introduced tougher rules around gatherings and hefty fines for not following guidelines.

Ultimately, the lengths to which people respect the rules now will affect how they will be able to reunite during the winter holiday season, according to Goel.

“Let’s work at following the precautions now so we can have a shot that least some more of our family can gather this winter.”

Goel recently spoke to U of T News writer Geoffrey Vendeville about the risks involved with travelling and seeing family and friends during the break, and the vital importance of continuing to follow precautions during the second wave.

In a recent podcast episode, you said we have to be very careful about family gatherings. What are the risks involved?

Given where things are, particularly in the Toronto, Peel, Hamilton and Ottawa regions, public health authorities want to minimize the number of contacts between people. So, for students, we had warned that if they have formed a social bubble with people on campus they could not consider themselves to be a part of another social bubble for a weekend away or a visit home.

However, now we've been told very clearly in Toronto that we should only stay with members of our own household. They're moving away from the earlier concept of social bubbles altogether.

As you move around, there are potential risks for those who you come into contact with while you're travelling. There’s also more risk at the actual event you’re planning to attend. For example, students might mingle with family members who are older and have pre-existing conditions – people who need to be protected.

For students who plan to go back home, there might also be a desire to get together with friends from their home community, who may be at other universities or colleges, or who are doing other things. We must remember this is not a normal year where you can just go home and see friends you left back in August. These mixing events come with real risks.

For students who plan to remain in residence, I would remind them to wear a mask in indoor common spaces and when you are near others. And stay in your room if you’re sick and remember to report your illness. Students in residence should also complete a UCheck self-assessment every day. We all need to work together.

The chief public health officer of Canada, Theresa Tam, suggested that Canadians have virtual Thanksgiving dinners. What are your thoughts?

I would certainly agree with that. You can do a lot online.

I’ve heard examples of people who are planning to order the same meals for take-out and eat it while connected virtually. I also think it's a great thing to support the restaurant industry at the same time.

You don’t have to be in the same room. It's time to be creative. There are family games you can do together online using different technologies. You can still do many of the things you're used to doing.

Of course, it’s not going to be exactly the same, but we need to explore other ways of interacting with each other for everyone’s benefit.

You’ve said that interactions with family differ from interactions in schools or the workplace and come with different risks. Can you elaborate?

The main point is that, in workplaces, schools and the university, we are maintaining physical distancing, asking people to wear a mask when appropriate and so on. When you're having a family gathering you're typically getting much closer to each other. You’re in a different environment.

If you are going to be having a gathering with people who are not in your household, the first thing I would recommend is to do as much outdoors as possible. The weather is looking pretty good for Saturday right now. Maintain physical distancing. Wear masks when appropriate. It’s really important that you trust everyone that is coming over to have been taking all the precautions. That's going to make for a very different kind of event – but one that carries less risk.

Earlier you mentioned that one of the risks would be that someone would be moving from a hot zone like Toronto to somewhere else with fewer cases.

It’s primarily about the numbers of people you're going to be with. But from a societal perspective, there's a risk that we'll have outbreaks seeded across different parts of the province or country where case counts are currently relatively low. So far, we have not had travel restrictions put in place in Ontario. But Nova Scotia has just told students in universities that they should not travel outside the Atlantic bubble so they don’t risk bringing disease back in.

Prime Minister Justin Trudeau recently said it is unlikely families would be gathering for Thanksgiving, but “we still have a shot at Christmas.” Do you agree?

I would agree with the prime minister on that point. Considering where we're at right now, we'll continue to climb in the number of cases for at least another week or two because the control measures have been put in place gradually. Also, public health messaging is ratcheting up on taking precautions and people are taking notice.

What we see in today’s daily numbers now are the result of events that took place a couple of weeks ago. So, you won't see the impact of these changes for a couple of more weeks. Inevitably, there will be some additional interactions over the Thanksgiving weekend. We're likely going to continue to see a rise in cases through middle to late October, and then hopefully we should start to see the rate of growth in cases slow down as the additional control measures take effect.

By the time we get to November, I trust we'll be coming down again. Hopefully if we're able to follow the precautions and keep things in place by December, we may wind up back where we were in late August.

The issue is not just with COVID-19, however, but with other viral and respiratory illnesses in the winter. How will the flu season look? There's still a real concern the health system will get hit simultaneously by COVID-19 cases and flu cases

I am cautiously optimistic. If we can do what needs to be done through Thanksgiving until the beginning of winter, we might be able to have additional activities around the winter holidays. But it is going to be challenging because we can't do as many things outside.

I still expect that we're not going to be looking at huge gatherings. Perhaps having a dozen close relatives together will be possible. Maybe that's something to motivate people. Let's work at following the precautions now so we can have at least some of our family gather for the winter holidays.