No more tears: Publicly funded research by U of T's Anna Taddio is taking the pain out of vaccinations in Canada and around the world 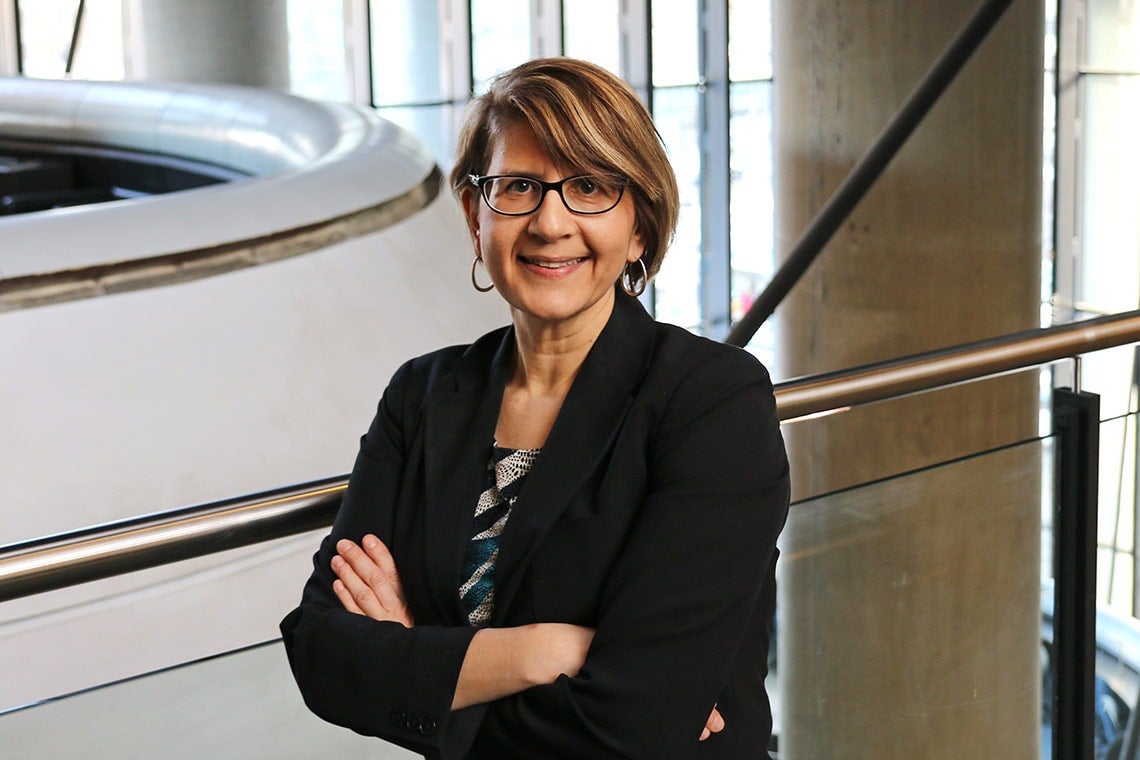 Anna Taddio, a professor at U of T's Leslie Dan Faculty of Pharmacy and a senior associate scientist at SickKids, researches childhood pain. Her vaccination recommendations have been adopted in WHO guidelines (photo by Chris Sorensen)

It was in the neonatal intensive care unit at Toronto’s SickKids Hospital in the late 1990s that Anna Taddio witnessed the consequences of infant pain first-hand.

The University of Toronto childhood pain researcher says newborns would frequently start crying as soon as nurses approached their incubators – particularly those who had been in the unit for an extended period.

“It’s almost like they anticipated something bad was going to happen,” says Taddio, a senior associate scientist at SickKids and a professor at the University of Toronto’s Leslie Dan Faculty of Pharmacy.

“And that’s probably because you were about to do something unpleasant – you didn’t go in there just to cuddle them.”

The observation was later affirmed by a 2002 paper, one of nearly 200 Taddio has authored over two decades, that showed babies pricked with multiple needles within the first several hours of being born reacted much more strongly to a standard screening test that involved drawing blood. Other research showed that negative health care experiences early in a child's life – involving needles or other painful procedures – could haunt them as they grew older.

Making needles and vaccinations more tolerable became a focus of Taddio’s ground-breaking pain research, the vast majority of which was funded by the Canadian Institutes of Health Research, or CIHR. Both are critical preventative medicine tools and represent most people’s first interaction with the health-care system, helping to shape long-term attitudes about it in the process.

Taddio's work is already having a big impact. In 2015, vaccine-administering recommendations developed by her team were written into Canadian clinical practice guidelines. Several were also adopted the same year by the World Health Organization.

It's yet another example how investing in fundamental research can dramatically improve the lives of Canadians and others around the world. Moreover, Taddio's research underscores the importance of adopting the recommendations of Canada’s Fundamental Science Review, which was led by U of T President Emeritus David Naylor, and calls for a $1.3-billion increase in federal research funding over four years, as well as sweeping changes to how it is administered.

Why? If CIHR's public funding didn't exist, Taddio may never have had the opportunity to conduct research into a problem many in the medical community previously believed was a non-issue – to the extent they thought about it at all. A child is vaccinated in North Darfur in 2012. Recommendations by Taddio's team were adopted by the WHO three years later (photo by UNAMID via Flickr)

Statistics show that roughly one out of every four people is scared of needles, albeit to differing degrees. And Taddio estimates that as many as 10 per cent of people avoid getting vaccinations because of a fear of needles or concern about injection pain, a situation that poses an obvious personal and community health risk.

What's more, those same fears can prevent people from going to doctors for other routine procedures and tests until it's too late.

Taddio explains that we have a medical culture that has historically viewed needles and vaccinations, and the pain associated with them, as a necessary evil – something that patients must simply grin and bear.

“Most needle fears develop between the ages of four and eight, and it’s usually in the context of a bad procedure where somebody held you down and you were struggling,” she says, noting that about half of all people who are scared of needles and vaccinations had a negative childhood experience.

The rest is due to simple apprehension. “Somebody scares you – or you see somebody else, say you see your brother get a needle – and it’s very traumatic,” says Taddio. “Then you become very afraid.”

Taddio speaks from both professional and personal experience. She recalls taking her eldest son to a Toronto clinic for a blood test when he was four. The nurse jabbed his arm, missed the vein, and jabbed again as he struggled and screamed.

He understandably left the clinic with a fear of needles, Taddio says.

But it doesn't have to be this way.

Taddio's work has shown a number of relatively simple measures that can be taken to reduce the pain and fear associated with vaccinations. They include: injecting the most painful vaccine last during a series of injections; ensuring older children and adults are sitting upright; breastfeeding infants before or after the injection; and using topical anesthetics.

Taking steps to acknowledge children's pain and distracting them during injections can also be effective.

“Many people are afraid of needles and so avoid getting vaccinated, which is such an important preventative intervention,” says Professor Heather Boon, the dean of the Leslie Dan Faculty of Pharmacy.

“Dr. Taddio’s work helps us understand why that fear develops so we can take simple steps to prevent it.”

Taddio began looking at childhood and infant pain back in the 1990s and was immediately struck at how little research existed on the subject. “People laughed at me,” she recalls. “They thought it was much ado about nothing.”

When it came to infants, she recounts the prevailing thinking at the time as follows: It’s too difficult to assess pain in babies because they’re incapable of communicating; even if their nervous systems are developed enough to feel pain, they’re too small to be administered drugs without side-effects; and, regardless of how much pain they feel, it doesn’t really matter because there are no long-term consequences.

Needless to say, Taddio found such justifications wanting, particularly when it came to “invasive” procedures like circumcision.

“If you were doing something like that in an adult, there’s just no way you would just strap someone down and proceed,” she says.  “So I would watch these procedures and these babies were just crying – they had so much pain they would actually stop breathing.

So Taddio, who did her PhD in pain management at U of T, began researching ways to reduce the suffering of babies undergoing circumcision and the safety of associated drugs. Then something unexpected happened while she was working on a study that looked at topical anesthetics and children receiving vaccines. She found, to her surprise, boys often had a higher pain score than girls, which, initially, made little sense.

“We later had this a-ha moment which was: Their experience with pain is different because boys are more likely to have been circumcised than girls,” she says.

The finding was bolstered by looking at the differences in pain scores between circumcised and uncircumcised boys in the same study, and another longer-term study that tracked boys who had been given an anesthetic during circumcision and those who hadn’t.

Taddio continued her research in a similar vein until 2007, when she decided to do a survey on vaccinations in Greater Toronto to see how her work and that of fellow pain researchers had influenced clinical practice.

That’s when Taddio decided to add translational research to her fundamental research. She assembled an interdisciplinary team of clinicians, scientists and policy-makers from across Canada to promote better pain care during vaccine injections. They called the initiative Help ELiminate Pain in Kids, or HELPinKids for short. “I thought it would be a good gateway to talking about pain,” she says.

The HELPinKids team published its first clinical practice guideline on reducing vaccine injection pain in 2010 in the Canadian Medical Association Journal. In 2015, they published an updated and expanded guideline in the same journal. Taddio was also invited to Geneva the same year to present at the WHO, which later adopted about half of the recommendations (some, like the use of topical anesthetics, aren’t applicable in developing countries because of the high costs).

Taddio stresses that her research, and the global vaccine guidelines that ultimately sprung from it, were heavily reliant on public funding.  “I primarily depended on CIHR because I couldn’t have the work associated with any conflicts of interest,” she says. “That was really important for the guideline panel, who are all working with governments.”

Even so, she says it remains difficult to get funding as a pain researcher, a field that she describes as relatively un-sexy.

“What I achieved with the money I received is actually amazing,” she says, adding that the full adoption of the Naylor report’s 35 recommendations would likely make it easier to attain funding.

The problem of pain and vaccinations is hardly fixed. Despite her research, Taddio says health-care delivery has been slow to change and pain management is still not optimally incorporated into medical procedures – a point that was hammered home when staff at a local hospital politely refused to give her needle-wary son a topical anesthetic before administering an injection.

“People were telling me not to use it because it didn’t work and I was like, ‘Uh, no. I will show you the paper.’” With the guidelines now in place, Taddio intends to continue with her pain research and find ways to generate further awareness. She’s now focusing on vaccination programs in schools, which represent many children’s first interaction with the health-care system without the assistance of their parents.

One strategy involves creating an easy-to-remember acronym to remind children their options when it comes to vaccination. For example, they might request being vaccinated in private rather than in front of peers, or they might bring a video game or smartphone into the vaccination room to serve as a distraction.

“In the past, we’ve burdened the health-care provider with everything,” says Taddio. “But I think it’s better to show the kids and then they can choose how to best cope.”

In the end, Taddio says it’s all about medical community acknowledging the existence of pain and working with patients to reduce its impact during injections and other procedures.

“Treating pain has many benefits,” she says. “It not only prevents unnecessary suffering, it ensures we are delivering the best care possible, improves everyone’s satisfaction with the experience, and improves health because people are more likely to participate in positive health behaviours like getting vaccinated and going to a doctor to get a blood test to look for high cholesterol and these sorts of things.”