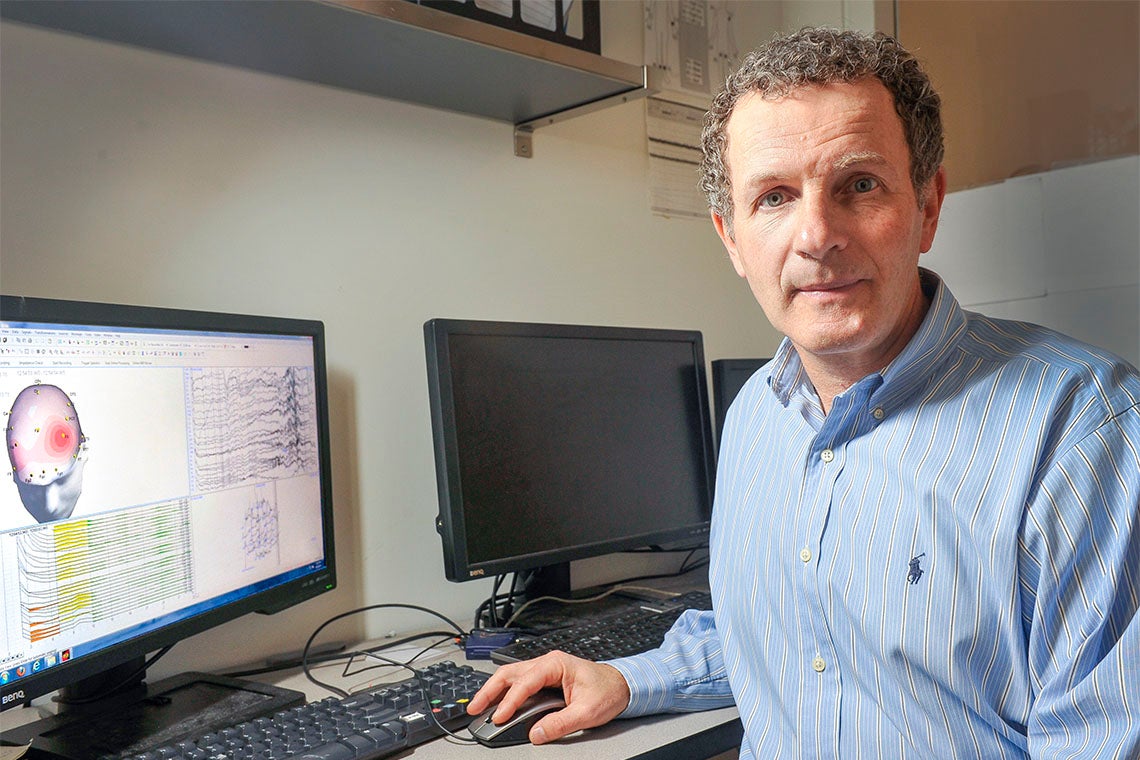 Zindel Segal, a clinical psychologist and professor at U of T Scarborough, says an online version of mindfulness-based cognitive therapy could help patients experiencing depression who don't warrant re-treatment, but remain at risk (photo by Ken Jones)

An online version of a pioneering therapy aimed at reducing the lingering symptoms of depression can offer additional benefits for patients receiving care, a new University of Toronto study has found.

When added to regular depression care, the online version of mindfulness-based cognitive therapy (MBCT) can help treat depression symptoms and help prevent its return, says U of T Scarborough Professor Zindel Segal, a clinical psychologist and lead author of the study.

“Treatments work well for many suffering from depression, but there remains a considerable group who continue to struggle with lingering symptoms such as sleep, energy or worry,” he says, adding that clinical data shows that, in the absence of treatment, these patients face a significantly higher risk of becoming fully depressed again.

“Patients with these residual symptoms face a gap in care since they are not depressed enough to warrant re-treatment, but receive few resources for managing the symptom burden they still carry.”

The digital version of MBCT, called Mindful Mood Balance (MMB), is an online adaptation of the effective treatment developed by Segal and his colleagues. It combines the practice of mindfulness meditation with the tools of cognitive therapy to teach patients adaptive ways of regulating their emotions.

The practice of mindfulness meditation helps patients observe rather than act automatically to any thought, feeling or sensation that comes to mind, setting them up for being able to choose how best to respond, according to Segal.

“Our goal has always been for people to develop skills that they could continue to rely on once treatment had ended,” he says.

While research indicates that MBCT is as effective as antidepressant medication in preventing relapse, access remains limited and nearly impossible for those living outside large cities.

“What drove us to develop MMB is to improve access to this treatment,” says Segal. “The online version uses the same content as the in-person sessions, except people can now avoid the barriers of cost, travel or wait times – and they can get the care they need efficiently and conveniently.”

Segal, along with colleagues Arne Beck, of Kaiser Permanente Institute for Health Research, and Sona Dimidjian, a professor of University of Colorado Boulder, received a $2 million grant in 2015 from the U.S. National Institute for Health (NIH) to develop MMB. The program was tested in a randomized clinical trial of 460 patients in clinics at Kaiser Permanente, a large American health maintenance organization in Colorado.

The results of the study, published in JAMA Psychiatry, found that adding MMB to depression care offered by Kaiser led to greater reductions in depressive and anxious symptoms, higher rates of remission and higher levels of quality of life compared to patients receiving conventional depression care alone.

“An online version of MBCT, when added with usual care, could be a real game-changer because it can be offered to a wider group of patients for little cost,” says Segal.

Segal says that even with the positive results, there is more work to be done. A common trade-off with online programs is that dropout rates tend to be higher than in-person treatment.

“The higher rates of dropout are somewhat offset by fact that you can reach many more people with online treatment,” says Segal. “But there’s still room for improvement and we will be looking at our user metrics and outcomes for ways to make MMB more engaging and durable.”