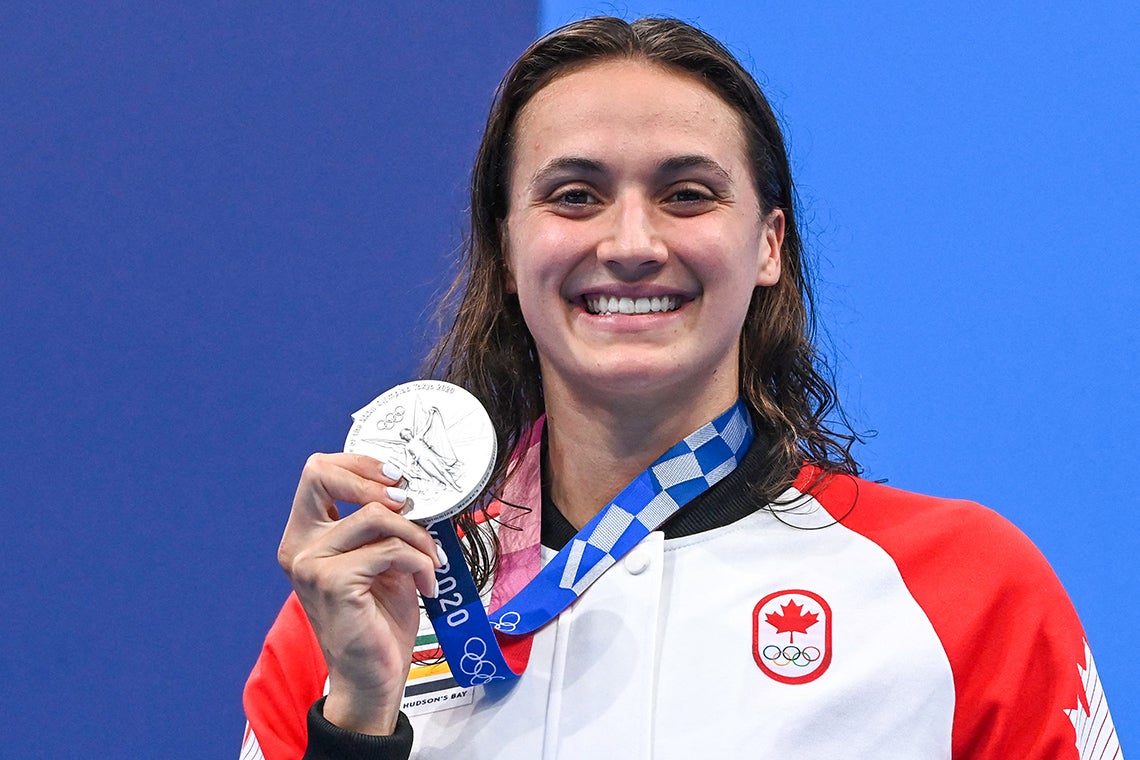 Kylie Masse, a U of T and Varsity Blues alumna, won the silver medal in the 100-metre backstroke on Monday night (photo by Attila Kisbenedek/AFP via Getty Images)

University of Toronto alumna Kylie Masse won the silver medal in the women's 100-metre backstroke on Monday night at the Olympic Games in Tokyo.

The 25-year-old from LaSalle, Ont., touched the wall in 57.72 seconds – three-tenths of a second behind Australia’s Kaylee McKeown – to finish second and earn her second straight Olympic medal in her signature event.

Masse, who swam for the Varsity Blues, tied for the bronze at the 2016 Games in Rio de Janeiro.

“I'm really happy,” Masse told CBC after the event. “To get on the podium in this incredibly talented and deep field, I knew it was going to be a challenge – so I'm really happy to have gotten silver.”

Masse, who graduated from U of T's Faculty of Kinesiology & Physical Education earlier this year, kicked off the Games with an Olympic-record swim of 58.17 seconds in heats on Sunday morning. In a sign of the competitiveness of the field, Masse’s record time was then broken twice – by American Regan Smith (57.96) and McKeown (57.88).

In the semifinals, Masse went on to touch the wall in 58.09, ranking her second coming into Monday's final event.

“It's always an honour to represent your country and this year especially when no one is able to be here,” she said. “I can feel the love and support from home and I couldn't be happier to bring a medal home and contribute to Canada's success here.”

Read about Kylie Masse’s road to the Tokyo Olympic Games

Varsity Blues head swimming coach Byron MacDonald, who is also in Tokyo as a CBC commentator, said he was impressed with Masse's performance.

“After all the challenges during this pandemic year, she rises to the challenge once again,” he said in an email. "Sport is about performance on demand and Kylie always answers the bell. What a record of getting to the podium these past six years. This silver is icing on a very impressive cake! We are so very fortunate to have had Kylie Masse on campus these past years. She is one of the greatest Canadian athletes ever, and an outstanding leader and compassionate friend to all who know her.”

Masse will also swim in the 200-metre backstroke and could make an appearance on Canada's women's and mixed medley relay teams later this week.

Masse's international highlights while competing for the Blues include a bronze-medal finish in the 100 backstroke at the 2016 Olympic Games, as well as breaking the world record en route to a gold-medal finish at the 2017 FINA world championships.