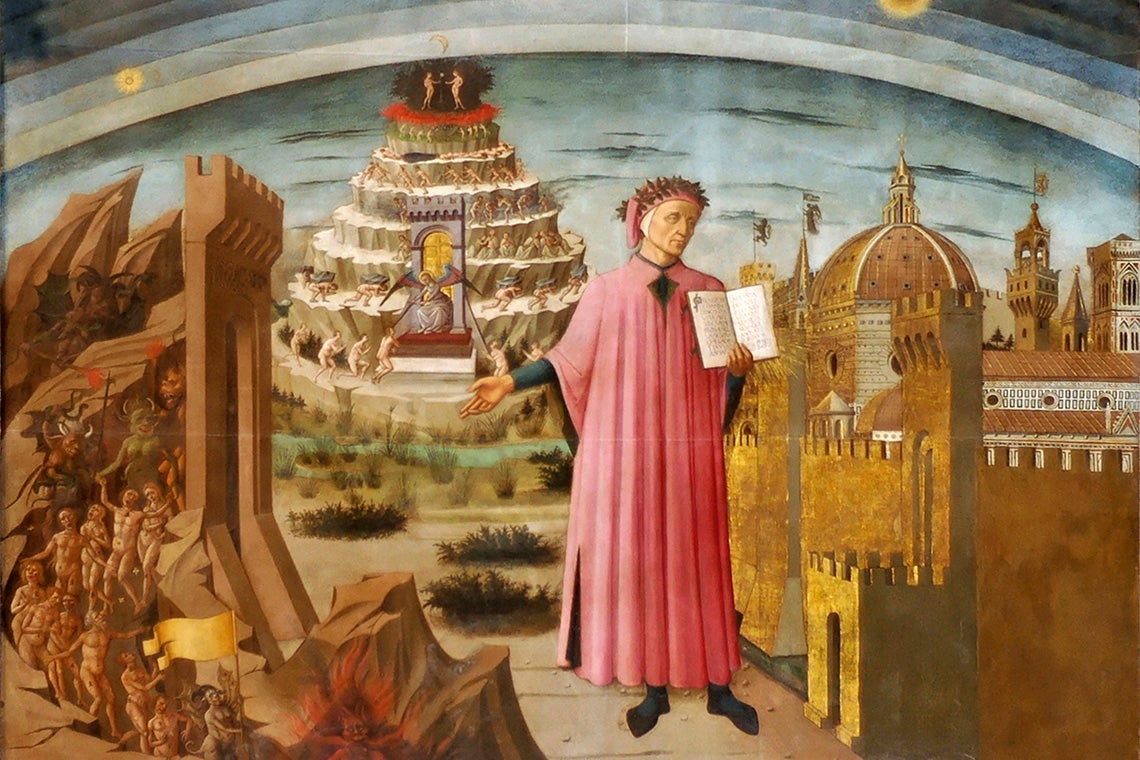 The department of Italian studies in the University of Toronto’s Faculty of Arts & Science is leading a project that will see most of the cantos of Dante Alighieri’s The Inferno read in more than 30 different languages – including, for the first time, Indigenous languages.

The opening 30 lines of the first canto of The Inferno will be read in Anishinaabemowin by translator Matthias Nunno, a member of the Ojibways of Garden River First Nation who is of both Italian and Ojibway heritage. The last section of the final passage will be read in Stoney Nakoda by translator Trent Fox, a doctoral student in education at the University of Calgary who identifies as Îethka.

Both Indigenous translations were prepared specifically for the project.

“We are honoured to be able to start in Anishinaabemowin and conclude with a passage in Stoney Nakoda,” says Nicholas Terpstra, the interim Emilio Goggio chair in Italian Studies, which is largely funding the project. “The idea of starting and finishing with Indigenous languages was something we thought was particularly important in Canada.

Organizers recruited community members, professors, students and alumni to read the cantos and share their thoughts about Dante and the canto they chose. U of T alumna and former Governor General of Canada Adrienne Clarkson – who earned her bachelor of arts in English language and literature in 1960 as a member of Trinity College, a master of arts in 1962 and an honorary doctor of law in 2001 – will be among the performers.

Clarkson, who learned Italian as a doctoral student and has a special passion for Dante, will read the entire first canto in English, including the portion previously read in Anishinaabemowin.

The canto texts will also be available for download from the department’s website in Italian, English and the language its performer chose for the reading.

The canto readings are being posted at regular intervals on the department’s YouTube channel. The first video was posted on March 25, the traditional New Year’s Day in medieval Florence, where Dante was born in 1265. The series will conclude in June.

The March 25 start date is also significant because it marks the day Dante enters The Inferno, the first canticle of The Divine Comedy, which also includes two other sections: Purgatorio and Paradiso.

The Toronto Salutes Dante project is the brainchild of Terpstra, Associate Professor Elisa Brilli and U of T alumnus George Ferzoco, who earned his bachelor of arts in philosophy in 1980 as a member of St. Michael’s College.

The Emilio Goggio visiting professor for the spring 2021 term in the department of Italian Studies, Ferzoco had established a tradition while teaching in the U.K. of having his students read Dante aloud to better appreciate the poem and get over their shyness around speaking Italian.

“Like most poetry, Dante is meant to be read aloud,” says Ferzoco, a visiting fellow at the Calgary Institute for the Humanities. Through the University of Calgary’s vice-provost for Indigenous engagement, he arranged for the translation by Fox of the final passage of The Inferno into Stoney Nakoda.

“I thought, ‘Well, I'm from Toronto, which is such a multicultural city. I'm in the Italian department. Can I bring something to my visiting professorship, and can it reflect the culture of the city, and indeed the country?’”

An acclaimed Dantista for her research and publications, Brilli has made U of T an international centre for Dante studies through a series of annual seminars. Two years ago, the Dante Society of America held its annual meeting in Toronto, the first time the society has held a meeting outside the United States since its founding in 1881.

“Toronto Salutes Dante is rooted in research done at the University of Toronto and the events we’ve held here, like the first-ever meeting of the Dante Society of America in Canada in 2019, and my 'Dante. Les vies Nouvelles’ Social Sciences and Humanities Research Council project,” says Brilli.

“I warmly hope this new endeavour will foster collaboration among scholars, students and our community of alumni, and the broader audience interested in Dante.”

While the bulk of funding for Toronto Salutes Dante comes from the Goggio Chair, community sponsors of the project include the Istituto Italiano di Cultura di Toronto (Italian Cultural Institute of Toronto) and Villa Charities.

In February, U of T hosted an international event for the Italo-Indigenous community called Indigenous-Italian Canadian Connections: Starting a Conversation that was led by people of Indigenous-Italian-Canadian heritage. The event included more than 100 participants from five countries – Canada, the United States, Italy, Spain and Costa Rica. It launched a year-long research and community project at the Italian studies department’s Frank Iacobucci Centre for Italian-Canadian Studies that will include a workshop in May and a conference next year.