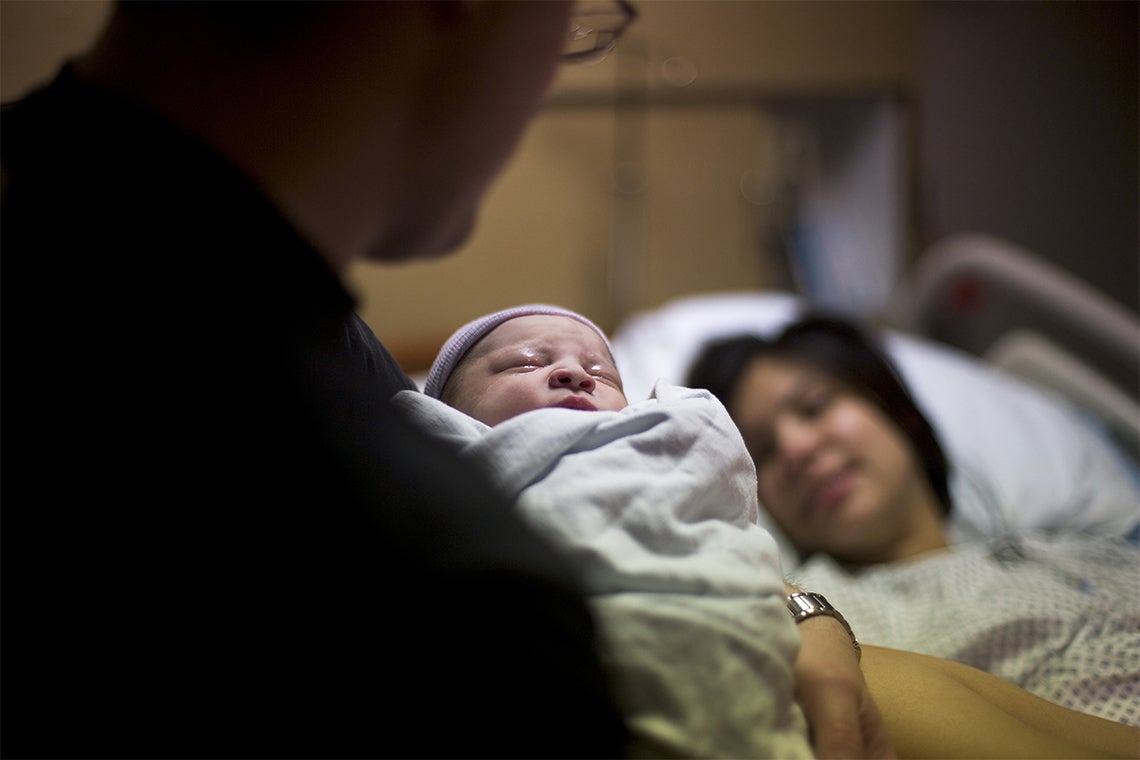 Despite commonly held beliefs that parenthood puts a strain on relationships, a U of T study has found most couples make the transition while retaining a high level of relationship commitment and satisfaction (photo by Brandx via Getty Images)

Diaper changes, endless domestic chores and lack of sleep – all are potential sources of relationship stress as couples make the transition to parenthood.

Leonhardt’s work was recently published in the Journal for Marriage and Family. The study, co-authored with other Canadian researchers – including Leonhardt’s adviser at U of T Mississauga Professor Emily Impett and Dalhousie University’s Natalie Rosen – looked at more than 200 couples from the prenatal stage to 12 months postpartum. It found that many of the couples retained high satisfaction and commitment into the first year of parenthood.

“The clear majority (81 per cent) of the 203 couples navigated the transition with high commitment and at least moderately high satisfaction,” says Leonhardt, adding that the team were surprised by how many couples successfully navigated the period. “And we learned that a huge differentiation as far as who ended up transitioning well were people that had good relationships going into this transition period.”

He adds that many of the couples who were most likely to successfully navigate the transition to parenthood had a more realistic outlook, didn't avoid emotional connection with their partner, felt their partner helped them grow as a person and believed their partner was committed to the relationship.

Leonhardt and the team found no differences between demographics such as age or additional stressors, including birth complications.

However, Impett notes that the sample of couples lacked diversity since most couples were white, well-educated and highly satisfied with their relationships as they entered parenthood transition. The vast majority were also married.

“I hope that our findings can be replicated and extended in more diverse samples moving forward into the future,” Impett says.

She says Leonhardt's work suggests that, overall, people should have reason for optimism going into parenthood.

“I think the focus on commitment as an outcome during the transition to parenthood is really important, and the take-home is that most couples ... remain highly committed. That should be music to many couples’ ears.”

Leonhardt says his research shows couples that it is possible to navigate the transition to parenthood successfully despite the commonly held beliefs that relationships suffer.

“I like being able to point out exceptions to the norm – to myth-bust a little bit,” Leonhardt says. “So with something like the transition to parenthood, I wanted to be able to see if we could break some of the common narratives and give people a little bit more hope.”

He stresses, however, that couples shouldn’t look to parenthood to save a troubled relationship.

“As a general rule, if things aren’t going well in your relationship, adding another person to this family probably isn’t the thing that you should be doing to try to resolve any relationship problems that you have,” he says.

“If you both go into [parenthood] with a sturdy relationship – you’re committed to this together, you’re realistic about both the challenges and opportunities that this transition holds – there’s a better chance that you’re going to navigate this successfully,” he says.

Fascinated by human relationships, Leonhardt says he would like to further examine why some couples might struggle in the early years of parenthood, and how some couples create a successful relationship for life.

“If you were to ask somebody about the best and worst experiences they've had in their lives, there's a high percentage of experiences that would have something to do with their relationship,” he says. “It's just such an integral part of who we are as human beings and how we come to understand ourselves – and what's ultimately most important to us in our lives.”

The research received support from the Social Sciences and Humanities Research Council of Canada.