'This moment was coming': U of T expert on U.S. polarization and fiery Kavanaugh confirmation hearing 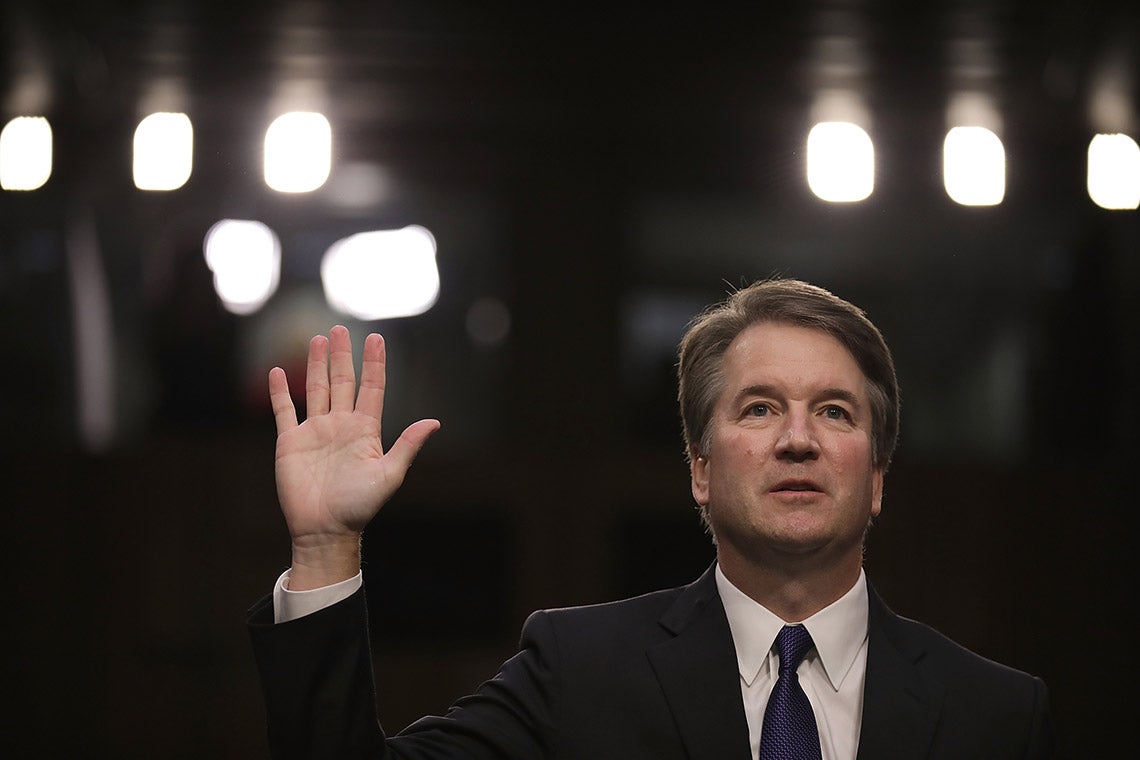 Justice Brett Kavanaugh is sworn in before his U.S. Supreme Court confirmation hearing in Washington, D.C. on Sept. 4 (photo by Drew Angerer/Getty Images)

The fractious Senate confirmation hearings for Justice Brett Kavanaugh appear to have supercharged political polarization in the United States.

For many, the testimony of Christine Blasey Ford, who accused Kavanaugh of sexually assaulting her while they were teenagers, has raised serious questions about Kavanaugh’s fitness to serve on the U.S. Supreme Court and the system’s treatment of women more generally.

Political scientist Ryan Hurl, an assistant professor at U of T Scarborough, weighs in on some of the issues raised by the hearings, including how he expects they will impact the U.S. midterm elections in November.

Has the confirmation process been enough to vet Justice Kavanaugh or should there have been more time to investigate?

I think that from almost anyone’s perspective the timeframe has not really been sufficient to investigate these kinds of accusations. I think if we were to look back at the #MeToo movement in general, the pattern has been for a few accusations to emerge and then, perhaps, for other witnesses and other accusations to come forward – the idea being that if an incident of this kind occurred, there are others.

And there hasn’t been enough time for that process to take place. Obviously it's very difficult for witnesses to come forward. People don't really have anything to gain from doing it, in my opinion. I think it would have been obviously a better situation if the accusations had emerged toward the beginning of the process.

Is this a more politicized confirmation hearing than what we're used to?

The reason it’s different is because you have a situation where you have the moderate Anthony Kennedy being replaced by a justice who in, all likelihood, is going to be a more consistent conservative vote.

One thing to remember is that Anthony Kennedy was fairly conservative across a broad range of issues. That’s drawing the politics – the idea that there's going to be a sea change in jurisprudence with this additional vote that's going to affect things all down the line.

It might be a mistaken prediction. A lot of people, for instance, anticipated that [Chief] Justice John Roberts was going to take a position against the constitutionality of Obamacare ... but that didn’t turn out to be the case.

Judges can make unexpected decisions once they’re on the court. That’s the way it's supposed to be.

It would be naive to say that the way in which (the hearings) proceeded was not to some degree dictated by politics.

There’s a reason why, for instance, the accusations were not vetted at a much earlier stage. This is speculation on my part, but I don’t think it’s utterly unreasonable to suggest that the Democrats are trying to play out the clock in the hopes that the political deck will be shuffled by the midterm elections, and they'll be in a stronger position later.

What do you think of the claim that Justice Kavanaugh could not be impartial now on the Supreme Court, given his emotional reaction to the Senate Democrats’ questioning? Is there substance to that?

No. He’s been accused of a very serious thing. To say a demonstration of emotion in the context of a highly charged hearing implies that you would not be impartial in a situation where you’re not a party to the case – that doesn't make much sense to me.

We say people can’t be judges in their own cases because, obviously, people are emotionally invested in themselves in a way that they’re not in other issues.

How do you think this will impact the midterms?

I suspect it will increase turnout in general. It’s just a question of which side has become more energized. I think that it's hard to assess things only a day after the events have occurred. My general sense is that it's created a level of furor that's approaching the level of emotion following the 2016 election, and it's occurring on both sides.

A lot of Republicans who had real issues with Trump, and were maybe even questioning their association with the Republican party, I think that this has caused them to change their minds. I think they look at someone like Kavanaugh and they see someone who could have been appointed by Mitt Romney – someone with the right pedigree.

Democrats are simply aghast that Republicans are not willing to take the accusations more seriously. For both sides this has become a rallying cry.

It’s a culmination of a generation of political polarization that has turned into polarization of the very meaning of the constitution. This moment was coming, sooner or later. The midterm elections will reveal the balance of forces.

But if Kavanaugh is not nominated – and I'm trying to be agnostic about whether he should be nominated or not – it will be devastating to the Republicans in the midterms.

Leaving aside anything to do with the merits of the case, he has become a cultural symbolic moment. It’s almost like the facts don’t matter at this point. He’s become a symbol. I think for a lot of Republicans, if they see that the party backs down over this they will be entirely dispirited and looking for other political outlets. The level of rage expressed by (Republican Senator for South Carolina) Lindsey Graham is pretty much representative of the feeling of the party.

When you say it will be devastating to the party, do you mean it’s because it would make the Republicans look weak?

Two months ago, people could have addressed this from a question of what story is most credible. As we enter the gravitational pull of the midterms, that’s more difficult.

Are people maybe overestimating how polarized the U.S. is now?

It's one of the most difficult things to assess. When we look at something like the Kavanaugh debate, are we seeing a battle that's only occurring among the small elite or something that is really affecting people in the broader public as well? I think the scope of polarization has extended in the Trump era.

That might change. I think that a growing economy and low unemployment can solve a lot of problems. So it remains to be seen. At one point a few years back I might have said that, from an economic perspective and other social indicators, that the problems of polarization are going to increase. I’m actually a little bit more optimistic about that now simply because I think we're finally getting out of the shadow of the 2008 financial crisis.

But I think it’s a strange situation. On one level there’s so many good economic indicators in the United States. On the other hand, you have so much elite tension. People have called yesterday one of the worst days in the history of the American republic, if you're concerned about the crisis of a house divided.

With this level of constitutional division and cultural division, what happens when the next recession hits? And we’re due for one. We’re due for another crisis.

That’s just another way of saying that political scientists are still in disagreement over whether the primary focus of polarization is among elites or spread among the public. I think it has spread somewhat, but it's difficult to say if it's as intense as it is at the elite level.

What happens if Justice Kavanaugh is confirmed, but the allegations are proven. Is it possible to remove him from the Supreme Court?

It is possible to impeach a Supreme Court justice, though it’s extraordinarily difficult and that's why it essentially never happens. I think the impeachment would require Republican support because impeachment requires a supermajority of the Senate.