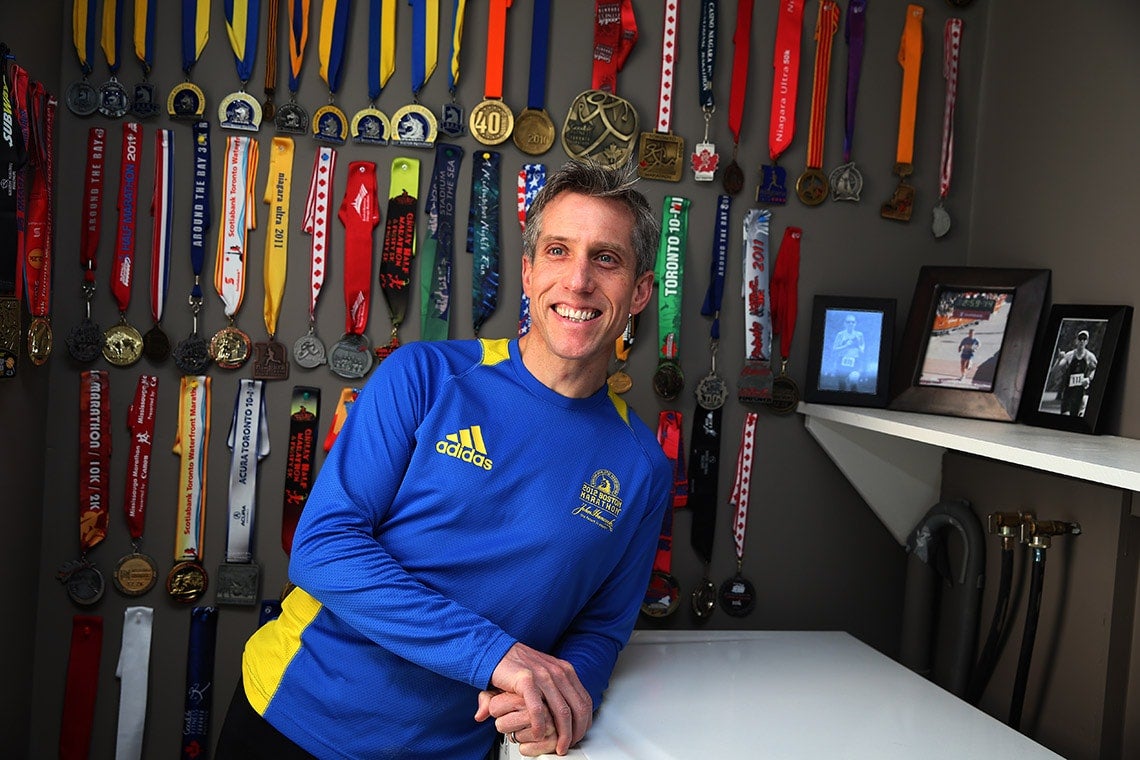 Jean-Paul Bédard, a long-distance runner and advocate for survivors of sexual abuse, is the keynote speaker at the 2017 Mindfest mental health fair (photo by Colin McConnell/Toronto Star via Getty Images)

On Oct. 4, Bédard will speak at mental health fair at U of T about 'cultivating resiliency'

If there is one thing Jean-Paul Bédard knows, it's endurance.

The long-distance runner has more than 100 marathons under his belt and trains enough to run a new pair of sneakers ragged every few weeks.

He also knows about another kind of resiliency. As a boy he suffered sexual abuse, which set him on a path to drug addiction and alcoholism. Many years later he opened up about his past to his family and then publicly came out in support of child sex-abuse survivors.

In 2013, Bédard ran the Boston Marathon, soon after telling his family about the sexual trauma he had experienced as a child for the first time. He was overcome with grief during the marathon and had to stop to compose himself. He reached the finish line 20 minutes before two bombs went off, killing three people and injuring more than 260 others. The experience left him with post-traumatic stress disorder.

The next year, he returned to Boston to run the marathon – twice. At the same time, he raised awareness about child sex abuse and collected donations for The Gatehouse, a community organization that supports adult survivors of child sex abuse.

On Oct. 4, Bédard will speak at the University of Toronto for Mindfest, a one-day mental health and wellness fair as part of National Health Awareness Week. Founded in 2013, Mindfest is spearheaded by U of T's department of psychiatry in the Faculty of Medicine.

The theme of Bédard's keynote talk is "cultivating resilience." He spoke to U of T News ahead of the event.

What do you find therapeutic about running? How has it helped you?
There's a lot of stuff to talk about there, but basically I grew up in a really violent home. There was physical and sexual abuse that occurred in my childhood. These early childhood traumas changed the trajectory of my life. Much of my life became one of these two things: escaping or numbing.
The numbing comes into effect in terms of the drug and alcohol use. I became an alcoholic and drug addict and that spiralled quickly into deteriorating mental health. Depression, suicide attempts, manic – not a pretty picture.
I had a distorted or disconnected relationship with my body. [For] most survivors of sexual violence, your body becomes something you really want to get away from. I saw it as something that was dirty, that had let me down, something I didn't even want to think about anymore.
That was the beauty of drugs and alcohol: They allowed me to literally run away from my body, just escape all that stuff. The thing about drugs and alcohol is that they work really well until they don't work anymore.
When I hit that tipping point, I had to go into treatment and deal with it. When I did, I found the athleticism that I had as a kid and started running a lot more often. So for me at first when I first sobered up a little over 20 years ago, running was an escape for my brain.
[Eventually] running became very, very cathartic. It became something that instead of me running away from something, it allowed me to run toward something. It allowed me to reconnect with that body that I was trying to forget since the sexual trauma I experienced.
What prompted you to discuss these difficult experiences openly, first with your family and then publicly?
I was sober. I was married. I had a son who was 23 years old at the time. I was a successful athlete and had a good career. Things were going very well, but the whole time I was juggling this stuff in my head. I was incredibly physically healthy ... but I had one of the sickest minds of anybody I knew because I couldn't juggle it anymore.
The first time you ran the Boston Marathon, in 2013, it was soon after you revealed to your family that you had been sexually abused as a child. Those memories overcame you, leading you to collapse before regrouping to finish the marathon. Then the bombs went off. You were diagnosed with post-traumatic stress disorder after that experience.
But the next year, you returned to Boston to run the marathon twice. Why?
I had gone through this treatment program of childhood sexual violence [at The Gatehouse in Toronto]. In order to process the trauma you really have to revisit it in some ways. A very common treatment modality is exposure therapy. If a person is terrified of hopping on an airplane, you get them seated in airplanes that aren't going to take off so they get used to the experience. [You do that] over and over again until they can be in a plane that takes off.
This is what was happening in my program for the childhood sexual abuse. We were kind of going back and looking at certain memories and then bringing me back to safety immediately, going back a little further and then going back to safety. I realized what an effect it had in helping me process the childhood trauma that I had never dealt with.
It wasn't a big logical jump for me to say I could probably do this with Boston.
As I said, running had become my sanctuary. It was my one escape. It made me feel great. But now I was terrified of going back to Boston.
I had to go back in the belly of this beast and figure out what was going on. I knew I had a substantial social media platform and exposure, so I decided to raise awareness for this issue of childhood trauma. 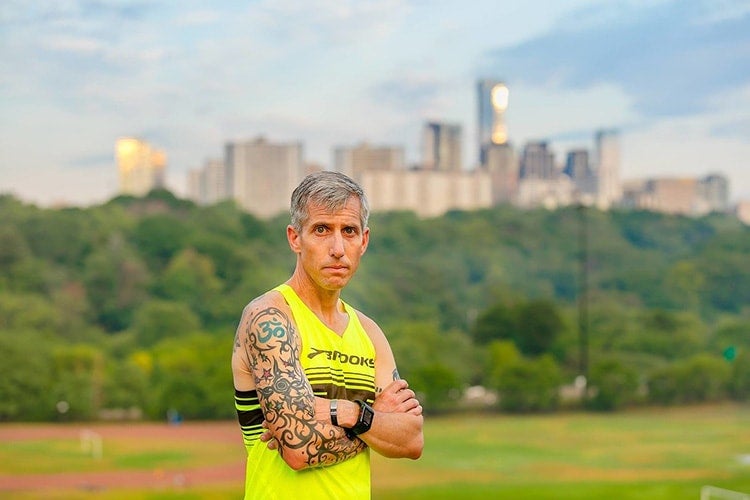 “Seeing you in others is the critical component of resilience because it allows you to accept that weakness is not a problem, it's an opportunity,” says Jean-Paul Bédard (photo courtesy of Jean-Paul Bédard)
There is stigma around childhood sexual abuse, as there is around many other issues related to mental health. How did you overcome this stigma to tell your story, and are you seeing more openness to talking about these issues today?
I do work with the Bell Let's Talk campaign and the Michael Lansburg SickNotWeak campaign. These things are really good in terms of talking about issues that we don't like to talk about publicly, but [that] we're starting to engage the broader public in.
My concern is that when I'm in a room like at the Mindfest conference, I feel like I'm preaching to the choir. What I really want to do is build more connections to people who don't talk about these issues a lot.
I try to figure out where my life intersects with different community agencies, different groups, and that allows me to move this topic into their realms.
As a man and an athlete and a public figure, there aren't many of us talking openly about childhood sex abuse or being sexually abused. It's much easier for me to get up in front of a room in front of a 600 people to talk about drug addiction and alcoholism. It's the talking about sexual abuse that's really hard for men to do. But if we don't start talking about it, we keep it in silence. And if we keep it in silence, not only do I get sicker as a survivor, but that's how perpetrators can proliferate because that's what breeds sexual violence – silence.
Back to your question: Have I seen this change?
Every time there's a media storm about a big thing that blows up in the news there's a lot of public discussion. We don't see that pushed throughout the year.
That's where I'd like to get it. I'd love to be able to pull people in off the street to the Mindfest conference and have a real honest discussion about what this looks like and feels like, because that's where we start to change things.
Back to the subject of your talk: what do you mean by resilience and how do you cultivate it?
I'm working on a book about this right now and I've interviewed over 140 people from around the world who are incredibly resilient and quite well known most of them. Resilience is something we think we don't have by and large, which is absolutely not true in my opinion.
I think we're all strongly resilient. The problem is, we don't often trust in it, and it often doesn't arrive until we are in a real crisis. But there are ways we can nurture resilience. There are four things we can do.
The first thing is to make sure we're surrounded by community. When we think about someone in addiction, the first thing you want to do is connect that person with other people who are struggling.
The second thing is surrender to the fall. The shitty thing about going through trauma and coming out the other side is you can't not witness it. You have to fall into it. By falling into it, you think you're going to fall down this rabbit hole and never see the other end of it, it's going to be horrendous. That's not true. To deal with something, you have to face it head on.
But back to the metaphor, here I have to embrace this fall say, 'Oh my god, this is going to suck but I'm going to embrace the suck because I believe I can.' It doesn't mean I will but I think there's a big difference between I can and I will. In order to be resilient you have to believe you can.
I think a lot of us get stuck in this [idea of] I will. When you say I will do something, it really sets you up for potential failure.
A lot of people think being resilient is being bulletproof. 'I was down and I'm back up again, nothing’s going to stop me.' That's absolute bullshit. It's not true at all. It has nothing to do with being bulletproof; it has a lot to do with moving and bending with whatever adversity, loss or stress you face.
It's learning to break and mend and re-break again
The fourth component is empathy: seeing yourself in others. This is the No. 1 thing that happens at a conference like Mindfest or online and social media campaigns about eliminating stigma.
It's allowing not only you to express your story, but it's allowing other people to see themselves in you. Being clean and sober for 20 years, I've spent thousands of hours in church basements in 12-step meetings. I walk into these meetings thinking, 'Oh my god, here I am 20 years later I'm still going to three or four 12-step meetings to deal with my addiction stuff. Isn't this ever going to get better?' What happens is, I put my ass in that chair and I see the 80-100 people in the room.
I see myself in their stories. I hear them tell my story. I see how much I've changed from where they are. I see how similar I am or how far I have to grow still. Seeing you in others is the critical component of resilience because it allows you to accept that weakness is not a problem. It's an opportunity.
Geoffrey Vendeville