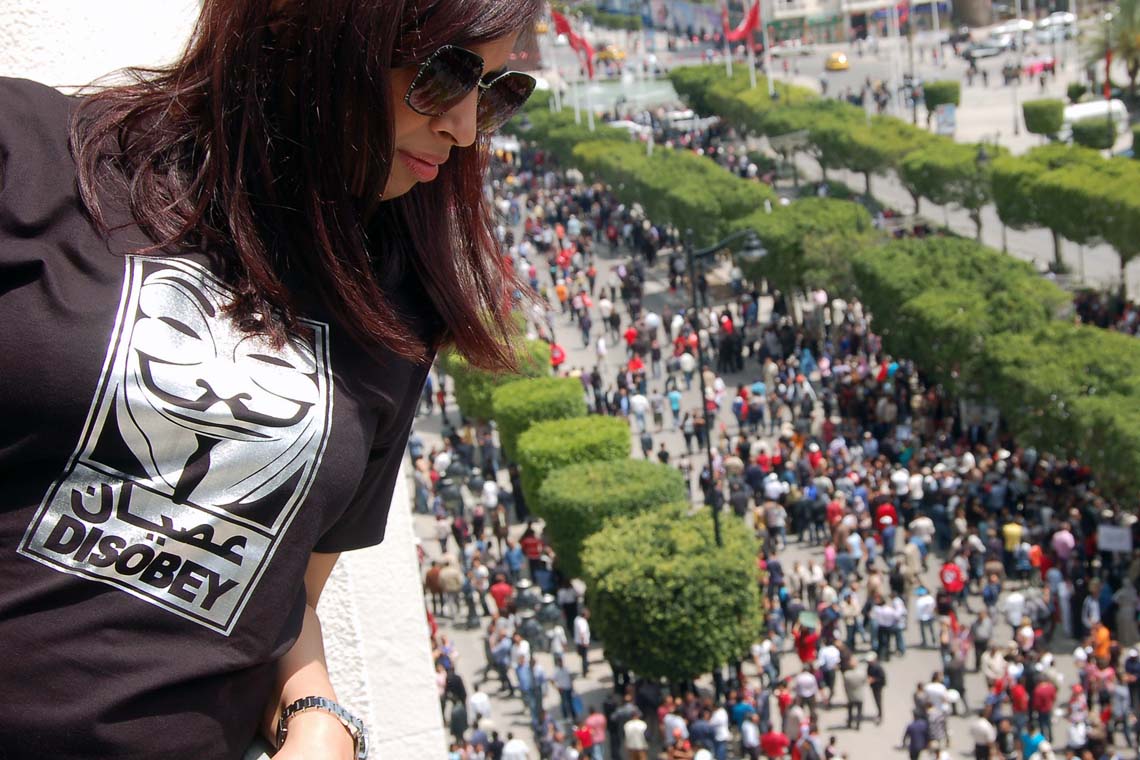 Above: activists in Tunisia; the interdisciplinary conference at U of T will bring together leading international researchers, feminists, activists, gender rights advocates, artists, public intellectuals and media (photo courtesy MENA)

International activists and scholars are gathering at the University of Toronto this week to explore how women are using new media and social media networks to effect political change in the Middle East and North Africa.

The two-day MENA Women: From Street Protest to Online Activism conference will take place March 22 and 23 on the downtown Toronto campus and at U of T Mississauga. Victoria Tahmasebi-Birgani, an assistant professor of women and gender studies at U of T Mississauga, organized the event.

“We will explore how women and activist feminists use online space and transform it to become feminist sites of struggle,” she says.

“This is a burgeoning field. European and North American feminism doesn’t speak to the experiences, priorities, historical contexts and lived experiences of Middle Eastern and North African women. These scholars have something important to contribute to feminist modes of theorizing, to feminist struggle, and to new media and transnational studies.”

The conference features well-known scholars in the field of women and digital activism, including German Muslim journalist Kübra Gümüşay, who will discuss her experiences as the country’s first hijab-wearing columnist and how online hate affects activists, social movements and societies.

U of T iSchool doctoral student Mariam Karim will present her study of how Saudi cyberfeminists use Twitter hashtag campaigns in feminist organizing and solidarity and Harvard University scholar and human rights lawyer Simin Kargar  will discuss her study of harmful online speech, gendered persecution and propaganda.

Sima Shakhsari, a University of Minnesota scholar of gender, women and sexuality studies, will discuss the influence and challenges of women bloggers in Iranian politics.

“The dissidents used Twitter, which became a vital mode of communication for protestors, causing the Iranian regime to block it. The Arab uprisings started on Facebook and became instrumental in telling people where to go, how to organize, and letting people know about arrests and other news as it unfolded.”

Since that time, the digital realm has changed and grown as citizens look for new ways to push back against oppressive political regimes.

“Digital spaces offered women a new way to organize and learn from each other,” Tahmasebi-Birgani says. “They started campaigns, writing blogs and, increasingly, using social media to create campaigns and networks.”

“It has one million followers and has become a  hub for all sorts of activities, dialog and conversation – women post their stories, testimonies and videos,” she says. “These actions contribute to women’s awareness, and gives them courage – when you share stories and read other women’s stories, you feel you can do it, too.”

Follow the conference on social media using the conference hashtag #MENAWomen18, on Twitter at @MenaWomenConfer or on Facebook at MENA Women: From Street Protest to Online Activism.