In memoriam: U of T's Marian Packham was a trailblazer in medical research 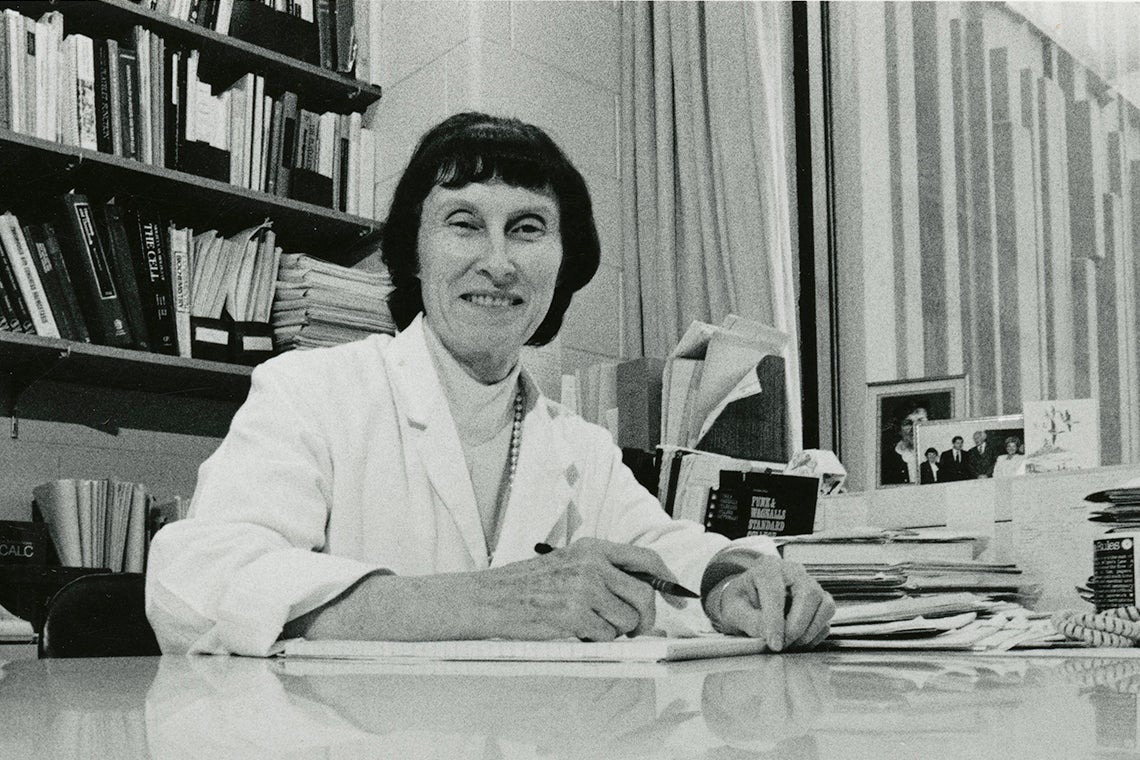 A trailblazer who spent over five decades advancing medical research in Canada, Marian Aitchison Packham, a University Professor emerita at the University of Toronto, was a highly regarded scientist at a time when there were few women in biomedicine. 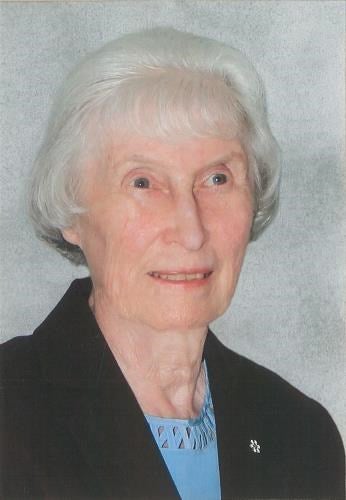 Packham’s research on blood clotting platelets led to critical breakthroughs in the prevention of strokes and heart attacks, and her work is still often cited to this day.

She died on Sept. 20 at the age of 92. leaving her friends and colleagues in the Faculty of Arts & Science and across U of T reflecting on a remarkable legacy.

“Her passion for and excellence in research and education, and her remarkable work ethic, were an inspiration to all with whom she interacted,” says Margaret Rand, professor of biochemistry and laboratory medicine and pathobiology in the Temerty Faculty of Medicine and a long-time collaborator, colleague and friend of Packham.

“This legacy lives on in us; Marian’s contributions, which were significant, will not be forgotten.” 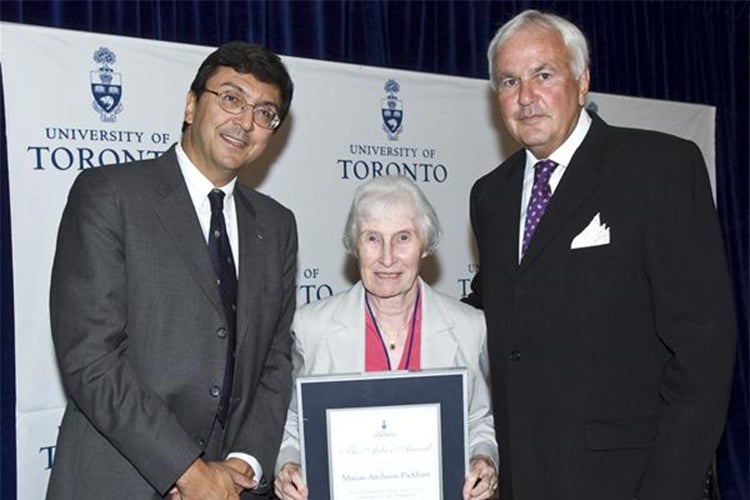 University Professor Emerita and U of T alumna Marian Aitchison Packham received an Arbor Award in 2008.

Born in Toronto on December 13, 1927, Packham earned her bachelor of arts degree from U of T’s Faculty of Arts & Science in 1949 as a member of Victoria College, earning the Lieutenant-Governor’s Silver Medal, and then completed her PhD in biochemistry at U of T in 1954.

Packham first worked part-time as a fellow/lecturer in the department of biochemistry at U of T and then joined the research station of the Ontario Veterinary College in Guelph in 1963, where she began many years of collaboration with renowned researcher and U of T alumnus Fraser Mustard.

She also worked with Mustard for several years at U of T’s blood and vascular disease research unit before rejoining the department of biochemistry in 1967, becoming only the third woman to serve as a faculty member.

“As one of a very small number of female scientists in the Faculty of Medicine in the 1960s and ‘70s, Marian served as a critical role model and mentor,” says Professor Justin Nodwell, chair of the department of biochemistry. “It is clear she paved the way for our current efforts toward greater gender parity." 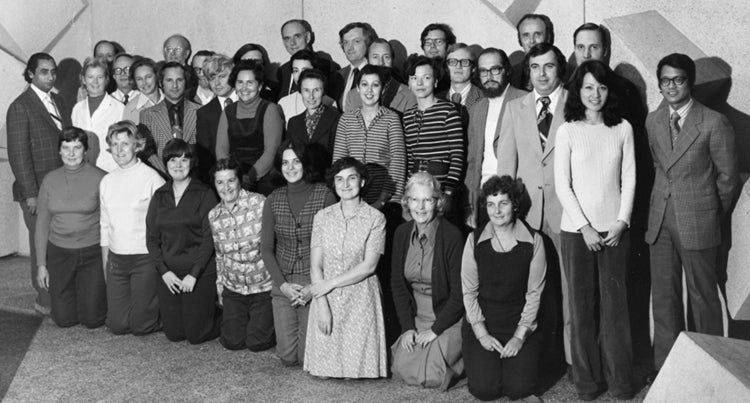 Packham rose through the ranks to earn the rare distinction of University Professor in 1989, U of T’s highest honour conferred upon less than two per cent of tenured faculty. She also held a part-time visiting professorship from 1966 to 2003 at McMaster University, where she continued her work with Mustard. In 1988, she and Mustard shared the J. Allyn Taylor International Prize in Medicine.

Packham was an active member of numerous departmental, faculty and university committees and she served on the editorial board of six journals in her field, and on the review committees of many institutions, such as the Medical Research Council of Canada, the U.S. National Institutes of Health and the Ontario Heart Foundation.

She published more than 300 papers and authored several books, including a history of U of T’s department of biochemistry and a biography of Mustard.

She won numerous awards for her outstanding scientific and educational work, including Fellowship in the Royal Society of Canada in 1991, a honorary doctorate from Ryerson Polytechnic University in 1997 and an Arbor Award from U of T in 2008. In 2012, she was named a Member of the Order of Canada. 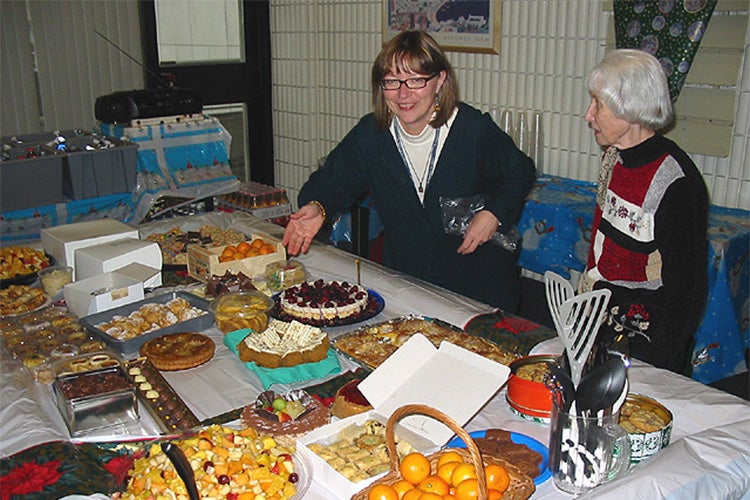 Packham (right) at a 2004 departmental party with Professor Margaret Rand, a long-time collaborator, colleague and friend.

Packham travelled extensively with her husband James after retirement and enjoyed gathering with family and friends at the cottage, but continued to publish scientific papers for years.

She died at her cottage on Lake Joseph in Seguin Township, Ont., surrounded by her children.

The family hopes to arrange a celebration of her life once pandemic restrictions make it possible, and ask anyone wishing to make memorial contributions to direct them to the Heart & Stroke Foundation of Ontario or to U of T’s department of biochemistry.