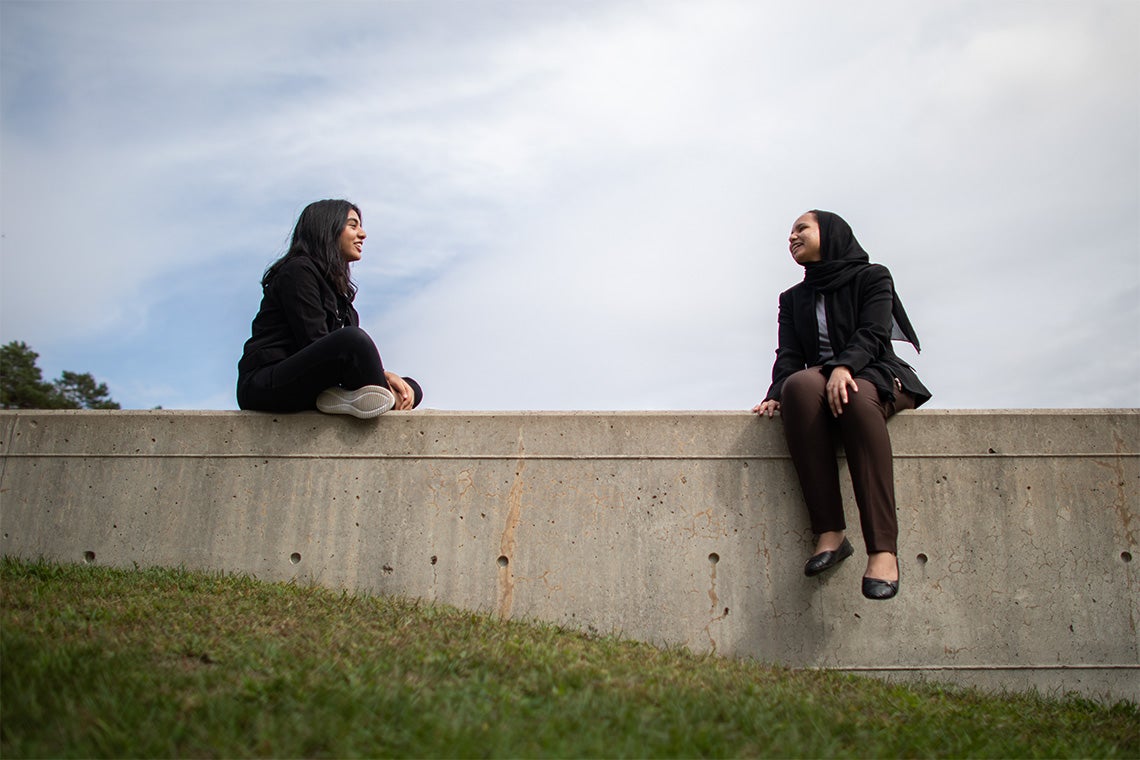 A program by the Dalla Lana School of Public Health that aims to introduce under-represented high school students to health careers has already borne fruit: Two of its participants, Maha Khan and Maimuna Akhter, are attending the University of Toronto this fall.

Both are enrolled in U of T Scarborough’s Life Sciences Program.

“I got accepted to all of the programs I applied for, but I really wanted to get to U of T,” says Khan, a recent graduate of Marc Garneau Collegiate Institute. “I kept getting the emails wondering ‘where’s U of T?’”

She got her U of T acceptance letter a week before March break – which she says was the highlight of her Grade 12 year. Just a few days before that, Khan had spent a whole day at U of T’s Dalla Lana School of Public Health learning about program development through the school’s outreach and access program.

“I got the email at 1 a.m. and I stayed up even though I had a class the next day,” says Khan. “It feels fulfilling to know that I got into Canada’s top university.”

The Dalla Lana School of Public Health’s outreach and access program launched in early 2019 to raise awareness of non-clinical career paths in health care and stimulate the creation of a diverse pool of young leaders from underrepresented communities, preparing them for progressively influential roles within public health and the broader health-care system. It consists of both a semester program, where mentors teach life and success skills through activity-based learning in weekly sessions throughout the academic calendar, and a summer institute, where students spend a full week immersed in activity-based, team learning centred around a case study.

Khan has been passionate about science since Grade 8. She grew up in Saudi Arabia, moving to Canada last year because her parents wanted her to have access to the best post-secondary schools.

She says she was familiar with life sciences, but wasn’t sure if she wanted to study the field until Ryan Hinds, an alumnus of the Institute for Health Policy, Management and Evaluation and the outreach and access program’s lead, introduced her to a variety of career options.

“Life sciences is quite broad, and it gives you options. I didn’t want to risk it and find myself in one place,” says Khan. “I want to dedicate my time to something that helps people like psychology, nursing or public health.”

Akhter, meantime, earned several scholarships for the coming years. She was set on studying engineering, but the Dalla Lana outreach and access program changed her mind.

“I always knew I was interested in health, but the only jobs I knew were doctors and nurses,” says Akhter. “I felt like I wasn’t interested in that, but doing this program made me realize there are so many other jobs and there’s a lot of jobs that I’m interested in.”

Akhter convinced Khan to join the outreach and access program one year ago after Khan mentioned she was struggling with public speaking. “I asked Ryan Hinds to give her an interview,” says Akhter. “He said ‘yes’ and that was it.”

Khan attributes her success in public speaking to the program.

“I was just looking for something that could help me gain that confidence and skills,” she says. “Ryan told me that he was definitely going to push me out of my comfort zone.”

The topics explored in the outreach program helped Akhter understand the breadth of public health, including Hinds’s week-long summer course about pandemic preparedness. In a fictitious scenario, a virus hit Toronto just as the Raptors clinched the NBA championship. Crowds poured into the streets. The parade was just a few days away but the virus was already ravaging through the city. She was among students from 11 high schools who had five days to come up with a plan to avert catastrophe.

Akhter’s team quickly realized that the parade couldn’t go on. “It makes you realize what’s important. I know that’s a big part of our city – it’s the first time we’ve won a championship,” says Akhter. “[But] we realized that the outcome of it is that more people would get sick. We needed to postpone it.”

A presentation by Laura Rosella, an associate professor of epidemiology, opened Akhter’s eyes to health inequalities. Rosella showed the group a map depicting much higher mortality rates in less advantaged communities. She then described the opportunities high-income communities received: access to more hospitals, better transportation services such as a subway line and accessible clinics.

The presentation was “eye-opening,” Akhter says, and she took inspiration from it.

“I was doing an English presentation, where we were reading a book from many years ago about how working-class people are the most disadvantaged at times,” she recalls. “My classmates were focused on the past, but I was able to connect all of this to the future situation – our situation. I showed the very map Professor Rosella showed us last summer. All of their faces were exactly like mine when I saw the map for the first time. Our communities will continue to be disadvantaged.”

While other classmates pointed to income as a reason for higher mortality rates, Akhter was able to outline the main principles of the social determinants of health.

“Professor Rosella showed us that by being closer to the subway line, the mortality rate was lower,” she says. “That’s something we never think about. Transportation to a hospital and clinic is a lot easier when you are near a subway line. It’s also more accessible. Downtown, there’s hospitals at every corner. And then going back to the income problem – someone with two jobs who has to put food on the table is not going to be able to go to a clinic or hospital.”

Both Akhter and Khan encourage other high school students to join the program. They say the soft skills they learned, including public speaking and leadership, were invaluable – not to mention the connections they made that helped them to take their first steps toward a rewarding career.