Measuring success in a suburban oasis: U of T students team up with neighbourhood groups to address urban challenges 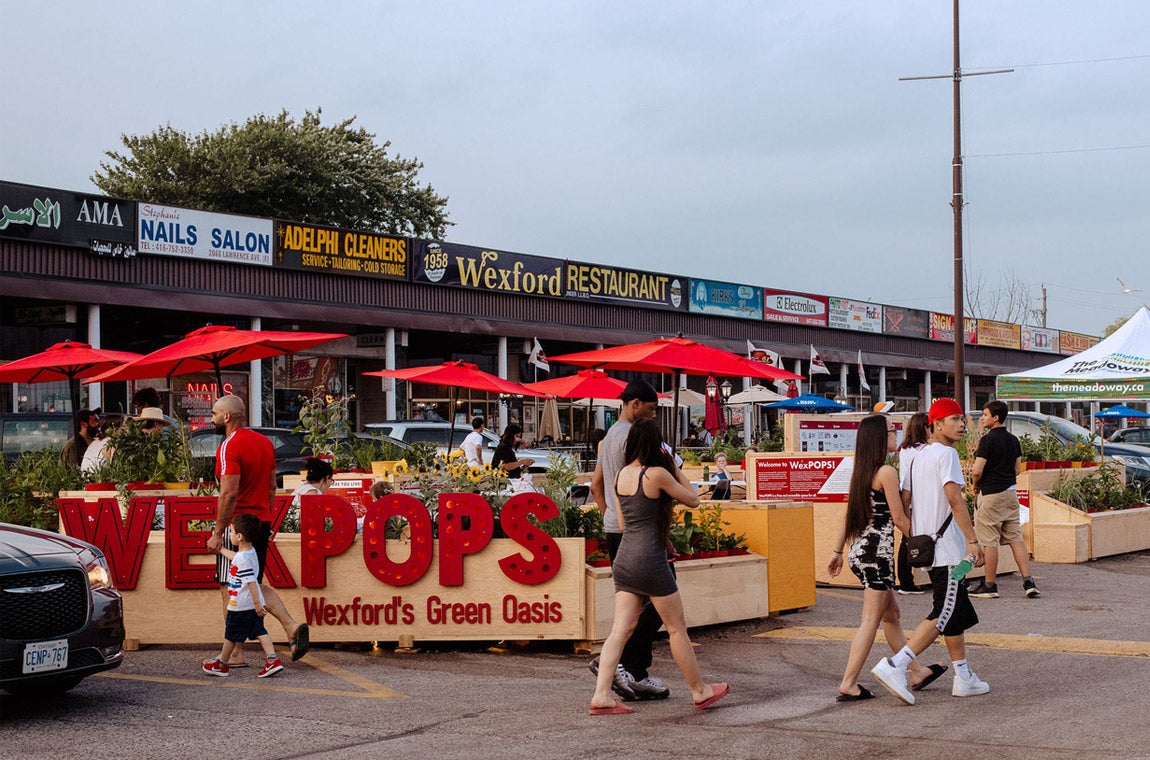 If you happen to be near Warden and Lawrence Avenues in Scarborough this summer, you’ll likely notice an unusual sight at one the many strip malls that populate the area.

Wexford Heights Plaza is a one-storey stretch of local businesses – including a barber, a Syrian pastry shop and a 61-year-old family restaurant – bordered entirely by a parking lot. But from July 5 to Aug. 18, a portion of the lot has been transformed into a makeshift suburban oasis, complete with comfortable seating, interactive art and hundreds of potted plants.

The installation is called WexPOPS – a temporary, collaborative project that aims to create a place where community members can gather, meet each other and support local businesses.

WexPOPS serves as a pilot project that, if successful, can be replicated in different ways in other business improvement areas (BIAs) in Toronto and elsewhere.

But to prove the project is worthy of future funding means having the data to back up its success. It requires a toolbox of strategies that will help organizers measure the impact of the project on the local community and businesses. That task was given to a group of University of Toronto students.

The U of T students were part of the Rotman CityLab Fellowship, a year-long elective course that pairs MBA students from the Rotman School of Management with urban planning and industrial relations master’s students. Together, they team up with BIAs and community groups, using their expertise to help address issues faced by neighbourhoods across the GTA.

“I was really excited about working with different people from different parts of the university and the tangibility of the project seemed really cool,” says Fifile Nguyen, who graduated this spring from the Rotman MBA program.

“I was also compelled because my parents, for several decades, were small business owners so I was really excited to be able to do something related to the work I had watched them do as I grew up.”

The WexPOPS installation was created by a group out of the University of Guelph called plazaPOPS, led by Daniel Rotsztain, a recent graduate of Guelph’s master of landscape architecture program, and his faculty advisers Brendan Stewart and Karen Landman. The project originated from Rotsztain’s thesis, which was realized when the team secured funding through a number of community grant programs to create its first pop-up installation in Wexford Heights Plaza.

PlazaPOPS was also inspired by the work of Rafael Gomez, a U of T associate professor and director of the Centre for Industrial Relations and Human Resources, and his work on small businesses and BIAs, which he wrote about in his book Small Business and the City. Gomez is also the co-founder of the CityLab course.

“When we reached out, Rafael was very generous with his time and knowledge, and suggested and facilitated the connection with CityLab,” Stewart says. 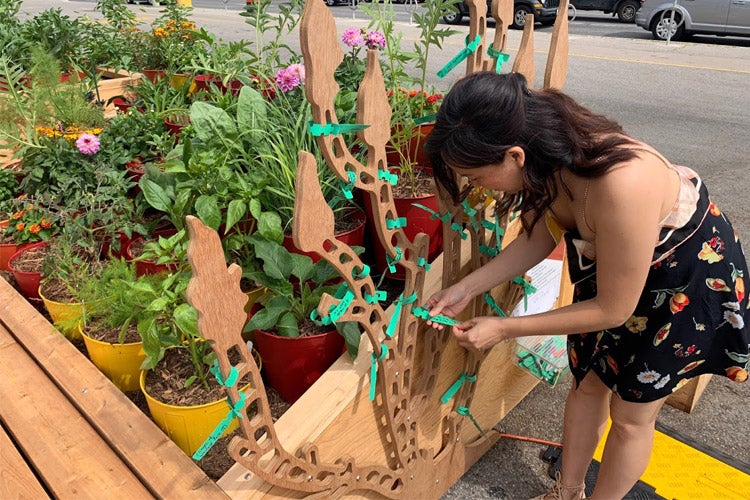 Joshi and Gomez met by chance over a decade ago in Wexford Heights Plaza where Gomez was hosting a pop-up of his own – occupying a storefront where he ran exhibits that celebrated the history and culture of the Scarborough neighbourhood.

The duo reconnected a few years later when they both coincidentally ended up working at Rotman, and decided to identify an experiential learning opportunity that could benefit both students and BIAs.

“The nature of urban problems is complex and multidisciplinary and at a local level, to assemble that kind of diversity of talent would be really expensive if these organizations were trying to do it on their own,” says Gomez. “We can come in with solutions to a challenging problem that requires all of our insights and training and academic knowledge.”

Since its inception, CityLab has placed students in BIAs across the city, working on projects that included navigating the tensions between long-standing and new businesses in a gentrifying neighbourhood, assisting with entrepreneurship programs in Scadding Court, and working with the Toronto Association of Business Improvement Areas to explore how big infrastructure projects are affecting small businesses.

For the plazaPOPS partnership, the U of T students provided the team with options for evaluating the strip-mall installation – including how WexPOPS affects the availability of parking, its economic impact on local businesses and the level of community engagement, says Stewart.

“They helped us work through the most efficient research data collection strategies that we can utilize in order to measure the performance of the installation,” he says.

“We’re implementing their recommendations, pretty much as we speak.” 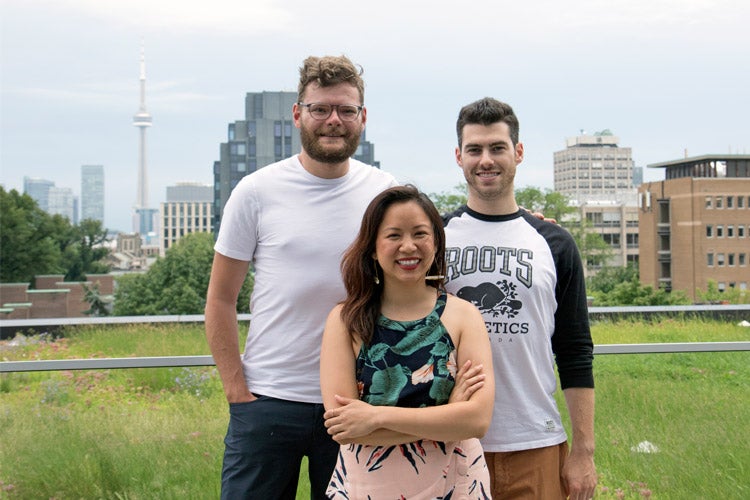 Building the right metrics involved a great deal of research and community consultation. Students read up on evaluation methods used by other City of Toronto pilot projects and tapped into their combined academic knowledge of design thinking and urban planning. The students also interviewed local businesses and community members to gain insight into what they felt would make WexPOPS a success.

“[Business owners] were telling us that they were really excited about being the catalyst for people to meet each other,” says Nguyen. The students also discovered that community members felt it was important to raise the profile of the neighbourhood, telling them, “the only time our neighbourhood is ever in the news is when something bad happens … but really there is so much more vibrancy to our neighbourhood than that.”

Similarly, U of T students were keen to turn the spotlight on Scarborough – an area of Toronto that’s often overlooked when it comes to inventive design and planning.

“When it comes to certain planning elements, suburbs are not looked at the same way as the downtown core, especially with regards to investment and doing things that are more innovative,” says Igor Samardzic, who graduated with a master’s in urban planning from the Faculty of Arts & Science.

In neighbourhoods that are less dense than downtown Toronto, strip malls play a much more important role in fostering a sense of community, says Michael Guberman, a CityLab student and recent MBA graduate.

“What they are lacking is the warmth and gathering spaces that you would see in more of an urban landscape,” Guberman says.

Projects like WexPOPS can help those suburban spaces become more of a community hub, he says. “Using what they have already, building on it and getting the community buy-in is important to see that this type of infrastructure is not forgotten and not thought of as a waste of space.”

Stewart says plazaPOPS is currently in talks with a number of potential partners as they determine how the project will evolve beyond the Wexford pilot. Regardless of the outcome, the data collected from WexPOPS with the metrics designed by U of T students will play an important role in defining its future.

“The data and the feedback on how it’s received is really critical to being able to scale this up,” says Stewart.

This September, the CityLab fellowship will enter its fourth year, offering a new cohort of students the opportunity to make their mark on community projects across the city.