Mapping the city: what Toronto’s waterways can tell us 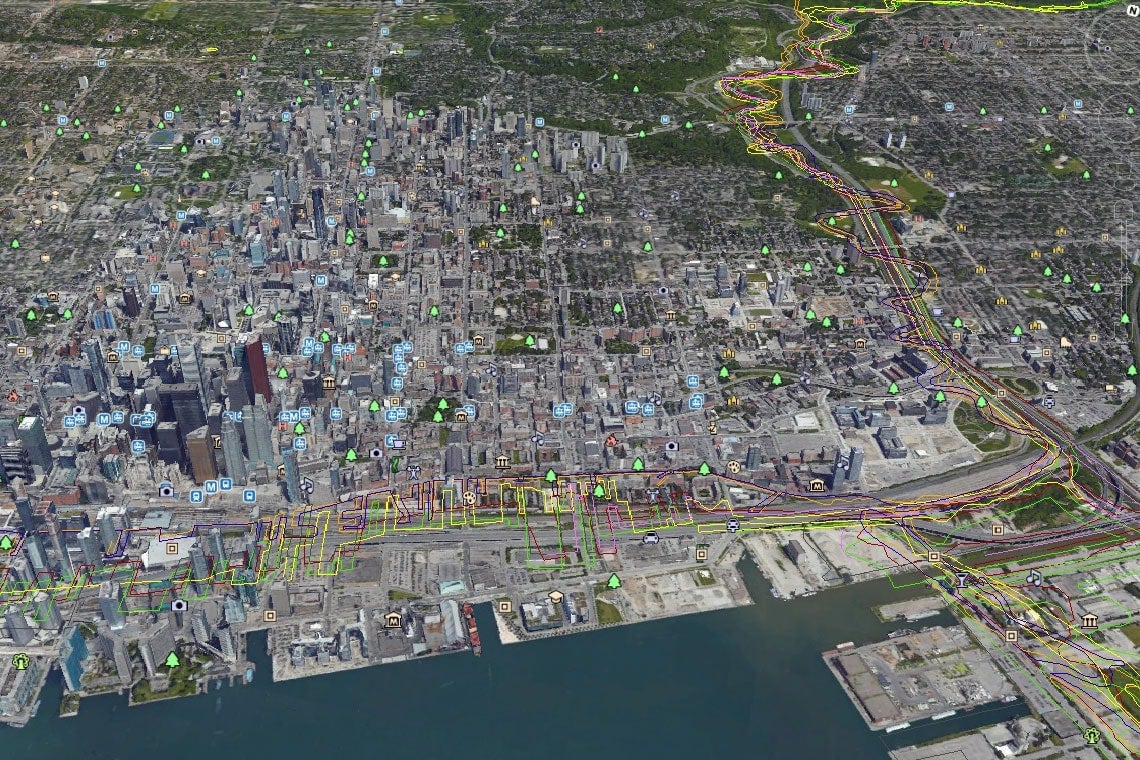 This map of Toronto, created by Marcel Fortin, head of the Map and Data Library at U of T, shows the evolution of Toronto's shoreline and the Don River between 1857 and 1918

“The more we have freely available information, the more we can tell better stories and we can get a better understanding of the city”

In this first instalment, U of T News writer Romi Levine profiles the work of Marcel Fortin and Jennifer Bonnell.

Before Toronto grew upwards, with its towering condos and mass of skyscrapers, it grew southward.

A century and a half ago, the city’s waterfront touched the railroad tracks south of Front Street. Iconic buildings like the CN Tower and Air Canada Centre now stand where Lake Ontario once was. It took decades to extend the land to where it is today.

You can see how it all unfolded in a series of maps created by Marcel Fortin, head of the Map and Data Library at the University of Toronto along with Jennifer Bonnell, a former doctoral student at U of T.

The maps were originally used to track the history of the Don Watershed and Toronto’s waterways from 1857 into the 1900s. Bonnell has since written a book about the Don River called Reclaiming the Don: An Environmental History of Toronto’s Don River Valley.

The project used the wealth of historical maps of Toronto available at libraries and archives throughout the city – overlaying them with current maps using geographical information systems (GIS) software.

With the ability to compare Toronto’s waterfront over time, you can really see how dramatically it has changed, says Fortin.

“In some places you’ve got a shoreline that’s a kilometre away from where it was,” he says.

The maps also show a very different-looking Don River, full of bends and curves, meandering south into Lake Ontario. But in 1886, the city began an ambitious project to straighten a portion of it.

“They were hoping to use it as a shipping canal but it never materialized in that way,” says Fortin.

The mapping project came with more revelations about the history of the city’s physical environment.

“The most fascinating thing is the number of historical water features we’ve uncovered that don’t exist anymore in the city,” says Fortin of the numerous rivers and creeks that used to snake through the city.

“We’ve buried tons of these features and built over them in some cases,” he says.

Fortin says the Map and Data Library uploads all maps they create online so that they’re available for free to anyone who wants to use them.

“The more we have freely available information, the more we can tell better stories  and we can get a better understanding of the city, the water and the industry and understand a little bit of how we got here,” he says.

The library’s maps have been used by students and faculty of a wide range of disciplines who in turn share data with the library to build on its current resources, says Fortin.

But it’s not just academics taking advantage of these maps. Fortin says the Don River maps have also been used by artists as inspiration for paintings and installations.

“Go beyond what your imagination can think about what you’re doing and be open to how it can be interpreted and used in different ways,” he says.