Mapping the city: smart transport data pave the way for a driverless future 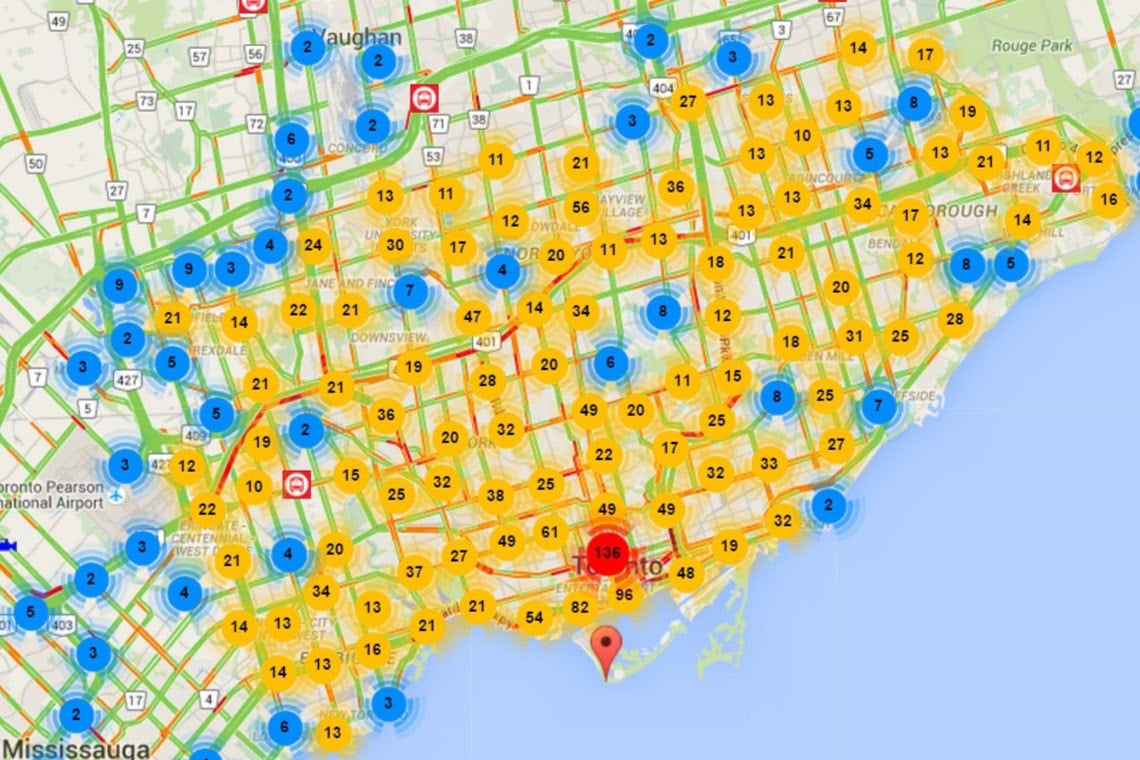 CVST map of the Greater Toronto area. The red, yellow and blue circles represent the number of data points in a specific location.

In the third instalment, U of T News writer Romi Levine profiles the work of Alberto Leon-Garcia.

Read part one: how transit can fix access to jobs

Read part two: what Toronto's waterways can tell us

“It’s a map but it’s more of a platform to do smart things.”

That’s how Alberto Leon-Garcia, professor in electrical and computer engineering at the University of Toronto, describes the Connected Vehicles and Smart Transportation (CVST) project – an ambitious, interactive map of Toronto that gives you a real-time picture of how people get around the city.

“We took it upon ourselves to build a platform that would be able to, in a snapshot, tell us everything we needed to know about the transportation network,” says Leon-Garcia, who is the scientific director of CVST.

“There’s something like 4000 streams of data here,” says Leon-Garcia.

Everything from speeds in certain segments of the highway, bus locations, and bicycle rental occupancies, to different types of cameras is represented on the map.

The red, yellow and blue circles represent the number of data points in a specific location. Zoom in and you can see the specific points, like a fixed camera or even the view from a drone.

Leon-Garcia says the drones are used to show how a city could utilize the gadgets for effective traffic surveillance.

“You can see a lot further and you can pan – you can choose a direction – a lot better than fixed cameras,” he says.

“One of the things we’re exploring is the use of drones to gather real-time information about events in certain locations in the city,” says Leon-Garcia.

The drones could be used to share information with the city and services like police and paramedics, he says.

The most interesting application for the CVST map is its potential in a driverless-car future.

“As vehicles become autonomous, you’re going to need a control system that directs the flow of these autonomous vehicles across this map,” says Leon-Garcia.

There are also implications when those vehicles become powered by electricity.

“There’s the management of the movement of the vehicles themselves,” says Leon-Garcia, “but then there’s also the coordination with the power grid so there’s sufficient power where the vehicles go to be recharged.”

Maps like the CVST could also become a big environmental player.

“If you start looking at air quality, at putting sensors on energy consumption, if you start keeping track of the energy that’s used, this same map becomes a map of the carbon footprint in a region,” says Leon-Garcia.

He says tracking emissions is a step toward reducing them.

With support from Ontario’s Ministry of Transportation and the City of Toronto, Leon-Garcia sees CVST growing with the city.

“In terms of meeting the challenges of cities, the interplay between public transit, subway, buses, bicycles and vehicles, especially as the nature of vehicles changes, there’s a lot of flexibility in terms of how things can evolve for the better – it’s exciting,” he says.

Geography and PlanningcartographyTorontoTransitCitiesMapsMapping the City