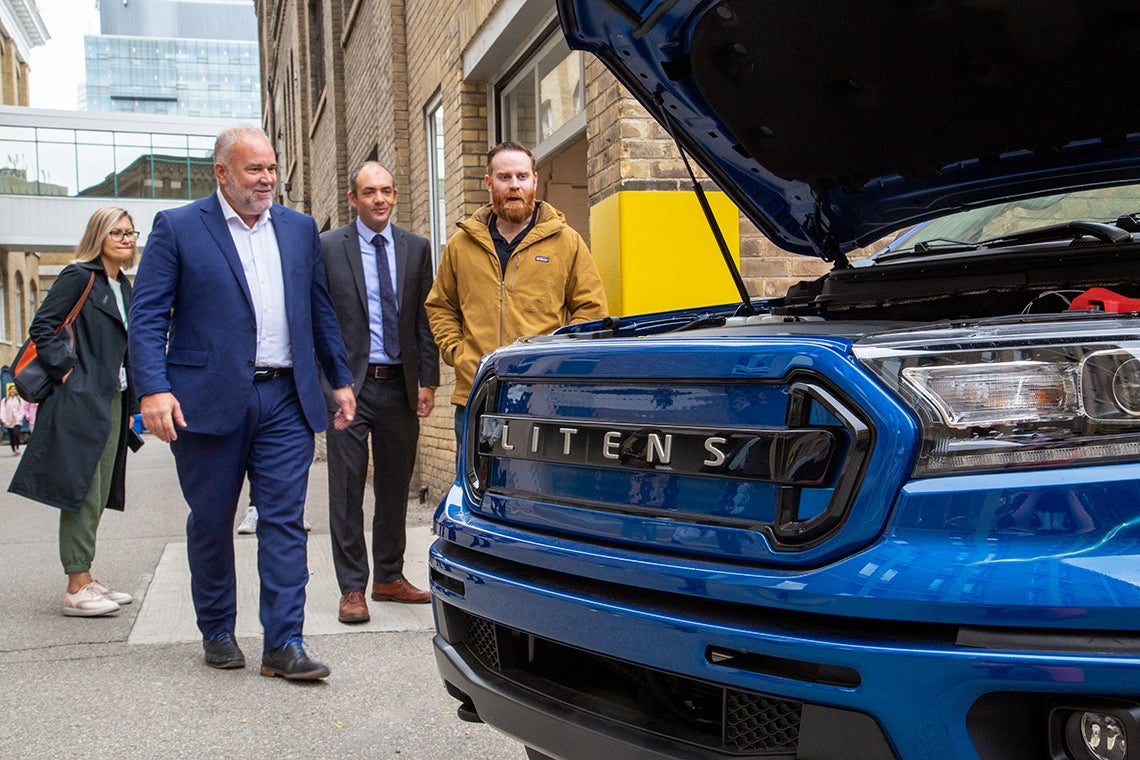 A partnership between Professor Olivier Trescases of the Faculty of Applied Science & Engineering and Ontario-based Litens Automotive Group is unlocking new levels of performance for electric vehicles (EVs) by developing advanced battery systems and technologies.

The partnership is supported in part by funding from the Ontario Centre of Innovation, which connects researchers and industry partners to commercialize the next generation of made-in-Ontario solutions. Ontario Minister of Energy Todd Smith visited the lab in early October.

“Our government’s Driving Prosperity strategy has positioned Ontario’s automotive sector as a North American leader in developing and building the car of the future,” said Smith.

“We’re continuing to transform and grow the auto sector by capitalizing on our many advantages, including our best-in-class research, our talented workforce, as well as innovative partnerships between universities and industry. U of T’s collaboration with Litens is a great example of how expertise from our world-class universities is helping to ensure that our auto sector is successful, competitive and ready to meet shifting global demand.”

As the market for EVs becomes increasingly competitive, automotive companies are shifting the focus of their research and development accordingly. Partnerships with academic research labs can help them hit the ground running.

By 2019, Litens had made the decision to transition all their new product engineering groups into the EV space. Late that fall, some of their leading designers came for a tour of the University of Toronto Electric Vehicle (UTEV) Research Centre, where Trescases serves as director.

UTEV brings together a core of multi-disciplinary researchers with wide-ranging expertise in EV technologies. Companies collaborating with UTEV gain access to leading-edge research while providing commercial resources and industry expertise that tie the research to the real world.

The first order of business was to create a test vehicle in which new components and systems could be validated. The team opted for a pickup truck – an off-the-shelf Ford Ranger that they converted into an EV by hand – as it provided the largest amount of space for the electric motor and battery components.

Both Gong and Cusimano had been part of the Blue Sky Solar Racing team, which inspired them to delve deeper into the world of electric vehicles. They had also completed their final-year capstone projects under the supervision of Trescases, getting to know his research team and their work under UTEV. For his part, Assadi had done his capstone project with the University of Toronto Formula Racing team, later joining UTEV to build on his passion for performance vehicles.

“Professor Trescases was my capstone supervisor, so I knew I would enjoy working with all the smart people in his lab,” says Cusimano, who is now a senior electrical designer at Litens. “I designed a lot of software and hardware for their prototype electronics system in the truck, especially in the battery management system.”

The battery management system (BMS) is made of hardware, such as microchips, sensors and controllers, as well as software. Together, they control how power is being drawn from across the 4,400 individual lithium-ion cells that make up the battery pack. Ryeland says that innovation in this system has great potential to improve overall performance.

“Lithium-ion cells are great, but they require some care: they like to be at the same temperatures that humans like to be at, and they have to operate within certain voltage ranges to avoid any safety concerns,” says Ryeland.

“In order to keep the cells healthy, designers tend to play it very safe, and as a result, the battery management systems are very conservative. That’s fine, but the practical effect is that you end up with more battery capacity in the vehicle than you really need, which makes the vehicle heavier and more expensive.”

Using EV batteries to their limits while keeping them healthy requires accurate models of their thermal and electrical behaviour. The U of T-designed BMS incorporates an advanced measurement system that can automatically generate these models through a procedure called electrochemical impedance spectroscopy (EIS).

Backed by theoretical and experimental work by Gong, Assadi and Cusimano, the EIS-powered BMS will act as a test bed for new ways of operating the battery pack.

“EV technology is still at its relative infancy,” says Trescases. “If you think about how far traditional internal-combustion cars have come since the '60s and '70s, you can imagine the scale of improvements that EVs are poised to achieve in terms of driving range, energy efficiency, sustainability and safety, not to mention emerging aspects such as bi-directional power (vehicle-to-grid integration) and wireless charging.”

“That’s what makes it an exciting time to be working in this area – there is so much innovation ahead of us, so it’s very rewarding to work with industry partners within the Ontario automotive ecosystem, nurturing the local talent in electrical engineering that is in high demand.”

Academic-industry partnerships will be a key driver of that innovation, as well as providing a path for both ideas and highly trained personnel to find their way into industry.

“Something like this battery management system would have taken us years to do on our own. It was the expertise in Professor Trescases' lab that got us up that learning curve faster,” says Ryeland.

“We’ve got a lot of really great ideas — what we’re doing with this partnership is connecting with the best people who can execute on them and drive that future forward with us.”