Low-cost, high-efficiency nanosatellites invented at U of T catch a rare stellar event 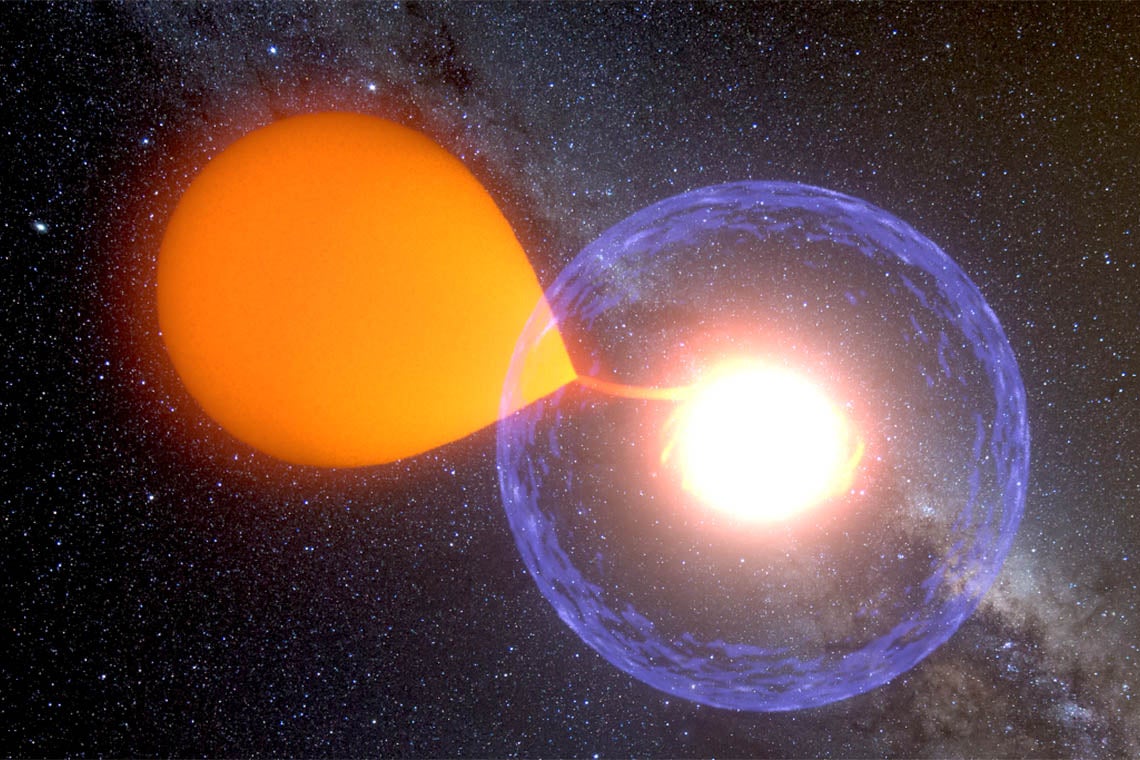 Artist’s rendering of the outburst of a nova (K. Ulaczyk, Warsaw University Observatory)

On March 22, Rainer Kuschnig of the Graz University of Technology in Austria was doing his daily check of the nanosatellites in the BRITE Constellation Project – a Canada-Austria-Poland collaboration – when something caught his eye. What seemed to be a very bright star, one which had not been there the day before, appeared on one of his screens.
“I’ve never seen anything like this,” wrote Kuschnig to the 12-member BRITE team, which includes Slavek Rucinski, professor emeritus in the department of astronomy and astrophysics at the University of Toronto and the man responsible for inventing the nanosatellites that spotted the phenomenon.
The star was subsequently identified as a nova, a massive explosion that occurs when one small, dense star acquires mass from another closely located star until the overload results in a violent burst of light and energy.
Only five to 10 novas are observed every year, making them a rare occurrence highly sought after by astronomers.
But this nova in particular was unique for two reasons. First, it was caught much sooner than usual. The early stages of a nova are often observed with insufficient frequency and accuracy because “we simply don’t know where to look," says Rucinski. “The sky is so big. It just so happens that we were observing this field when the nova exploded. But this is not done by any automatic processes – we have a person who looks at fresh results as they come in, and he recognized something unusual. It’s a combination of luck and human participation.”
Second, the BRITE team realized just how exceptionally good Rucinski’s equipment was. His nanosatellites – weighing between one and 10 kilograms, compared to the 1,000-plus kilogram weight of regular-sized research satellites – were initially built with budgetary constraint in mind. They were “cheap to launch and cheap to develop,” says Rucinski (pictured left).
Intended only for “extremely simple things, like measuring the density of the upper ionosphere,” the nanosatellites have now revealed their extremely high versatility and flexibility through this recent unexpected discovery.
When Rucinski first began to consider the potential of nanosatellites in the late 1990s, very small satellites – under 100 kilograms – were a rarity.
But he and Robert Zee, the director of the Space Flight Laboratory at U of T’s Institute of Aerospace Studies (UTIAS), were envisioning something new and unprecedented in the world of astronomy: a small, lightweight satellite that could focus exclusively on massive stars with very high luminosity – “the brightest and rarest stars in the sky," he says.
This initiative followed another Canadian success, the small satellite MOST (a microsatellite with a mass of 70 kg), which Rucinski proposed to the Canadian Space Agency together with Kieran Carroll and was operated from 2003 to 2014.
Massive stars are among the least understood, and are “very, very important,” says Rucinski, “because they produce heavy elements, the material of which we are made. Solid things, our bodies, our products, everything, it’s all made up of this little leftover ‘stuff’ from massive stars.” So this research is key to understanding the very building blocks of our world.
Rucinski and the BRITE team have opened up a new domain of miniature, low-cost spacecraft – BRITE nanosatellites that cost under $2 million each, much lower than the hundreds of millions it costs to build and launch full-sized satellites. These nanosatellites boast unprecedented precision that can explore the minute structure, variations and instabilities of bright stars, a key aspect of understanding the materiality of the world around us, he says.
BRITE originated as an idea in Canada, with Rucinski an early founder and key contributor, but its first satellites were funded by the University of Vienna in 2006. Poland joined in 2009 with funding from the Copernicus Astronomical Centre in Warsaw. Funding for the Canadian complement of the project was added in 2011. The nanosatellites were initially built by UTIAS and then duplicated in Austria and Poland.
The BRITE team is working on a full publication about their discovery, to be published sometime in the next year.
Jovana Jankovic