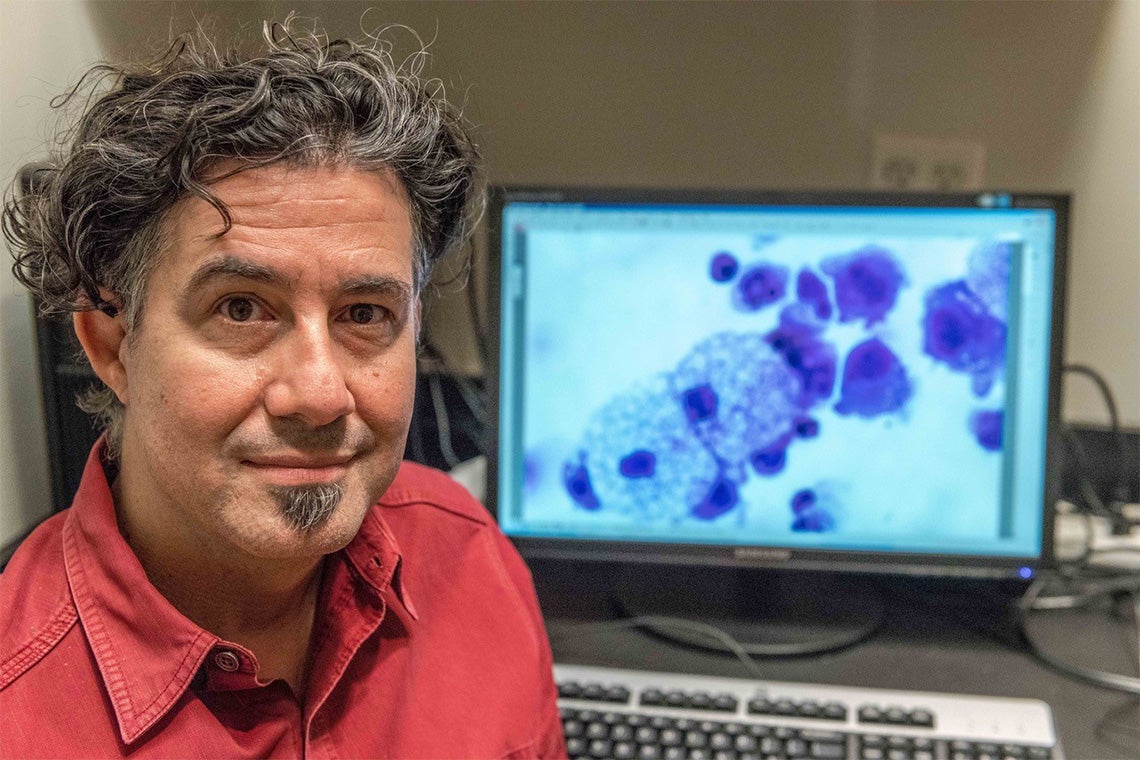 Derrick Rossi, a U of T alumnus who will speak at a U of T Entrepreneurship Week event on March 11, co-founded COVID-19 vaccine-maker Moderna more than a decade ago. He's since been involved with four other biotech firms (photo courtesy of Derrick Rossi)

When stem cell biologist Derrick Rossi co-founded the biotech firm Moderna, he envisioned that its novel solution – using modified messenger RNA molecules to relay genetic code to human cells – would have widespread applications in the realm of genetic disease.

“We studied in my undergraduate program and grad school that genes and mutations in genes underlie pretty much all human genetic diseases, which is a large fraction of human diseases,” says Rossi, who earned his bachelor’s and master’s degrees in molecular genetics at the University of Toronto.

More than a decade later, Moderna – named for “modified RNA” – recently launched its first approved product. It had little to do with Rossi’s original vision but was no less significant in its potential impact: a vaccine for the virus that causes COVID-19.

“Viruses are not a particularly good business model,” says Rossi, who is no longer affiliated with Moderna, but remains an investor.

“It’s not something that a biotech company would be thinking about because there’s not much money to be made there.”

The exception, it turns out, “is in the case of a global pandemic – but that was not foreseen.”

Rossi is set to discuss his unique journey as a biologist-entrepreneur and his thoughts on biotechnology innovation in a March 11 discussion for the RBC Speaker Series event during the fifth annual U of T Entrepreneurship Week. His conversation with BNN Bloomberg anchor Amber Kanwar promises to be a signature event of the annual celebration of innovation and entrepreneurship, which runs from March 8 to 11 and is open to all members of the U of T community and the public.

The free, four-day program, held virtually this year, features an array of events including pitch competitions, startup showcases, workshops and networking sessions. It shines a light on U of T’s vast entrepreneurship ecosystem, which has spawned more than 500 companies and secured over $1.5 billion in investment over the past decade, with U of T recognized as Canada’s top university-managed incubator for research-based startups.

“Derrick’s many achievements – which include laying the groundwork for Moderna and a COVID-19 vaccine that’s poised to save lives in Canada and around the world – are a source of pride for the University of Toronto,” says Jon French, director of U of T Entrepreneurship.

“We are delighted to welcome him back to his alma mater, albeit virtually, to learn from his journey as a scientist-entrepreneur and hear his thoughts on biotechnology innovation and its potential to save and transform lives.”

Rossi retired from his position at Harvard University in 2018, where he was an assistant professor in the department of stem cell and regenerative biology. He remains an active entrepreneur.

He says one of the most important lessons that he learned, and that he looks forward to sharing with young entrepreneurs at U of T, is the importance of asking the right types of researcher questions.

“There are two types of questions,” says Rossi. “As a biologist in a lab, you can answer a question that’s really interesting but isn’t going to move the needle on patient health at all, or you can ask a different question that. if you get an answer to it, might solve a problem that could be moved towards patients.

“As soon as I realized that, pretty much all the questions we asked in my lab had that type of focus.”

Rossi’s lab at Harvard focused on various aspects of stem cell biology, “a field which, by the way, has its origins in Toronto – Till and McCulloch started that entire field,” he points out, referring to U of T researchers James Till and Ernest McCulloch, who demonstrated the existence of stem cells in the early 1960s.

The question that prompted Rossi’s lab to develop the process underpinning Moderna’s COVID-19 vaccine had to do with whether mRNA could be altered to coax cells in the body to produce specific proteins.

He explains that proteins are the “worker bees of the cell,” while DNA holds the genetic code.

“So, you need this intermediate molecule called messenger RNA that carries code from the DNA to the protein-manufacturing facility inside the cell,” says Rossi. “I call it the trifecta of life. DNA makes RNA, makes protein – makes life.”

But despite the role of mRNA being known to scientists since the 1960s, molecular biologists had struggled to leverage it in their work.

“The question is: why? Well, the answer that most molecular biologists would give you is that RNA is very unstable – it’s a very transient molecule, it’s easily digested by enzymes ... and that’s true, but it seemed unsatisfying to me,” says Rossi.

Rossi’s lab began its work by trying to code genetic instructions for green fluorescent protein – a protein that exhibits green fluorescence in jellyfish – into mRNA and delivering it into cells in a dish. “We got a few green cells, but we mostly got a lot of dead cells,” he says. “Dead cells is not what we wanted.”

The researchers later repeated the experiment – this time using modified versions of nucleosides.

“We found that we could now basically get the green fluorescent protein expressed in all the cells in the dish. So that was the ‘eureka’ moment.”

The process was then established in animal models. A key milestone was an experiment in which Rossi’s lab made a modified mRNA for a protein that causes fireflies to light up at dusk and injected it into the thigh muscles of mice, causing them to glow.

Along the way, Rossi says an entrepreneurial flame was lit – something he says he wouldn’t have predicted when he was starting out as a scientist.

“I was thinking about science primarily as an academic pursuit, answering questions that are previously unknown and being pretty happy to do that,” he says. “It actually even used to be taboo for scientists to think about moving their stuff to [market] ... but that changed in the mid 1-980s when the first biotech companies were being formed.

“Then I did it once with Moderna and I got the bug.”

He’s now the CEO of Convelo Therapeutics, which is developing a novel treatment for multiple sclerosis.

As for Rossi’s entrepreneurial “bug,” there apparently is no cure.

“I retired from academia two years ago with the intent of really retiring – taking my kids to school, picking them up from school, and just doing some different things in my life,” he says.

“But I can’t say no to the science. I’ve known the scientist behind [Convelo] for many years, so I started helping with moving his science into the clinic and founding a startup, and I got more and more involved with advising ... and somehow I became the CEO of this company.”

With the experience of founding or co-founding five companies now under his belt, Rossi says he’s come a long way since his first foray into entrepreneurship as the founder of Moderna.

“When I did it the first time, I didn’t really know much about it,” he says. “Of course, why would I when I didn’t have any training?

“But now I’ve done it a number of times, so you tend to get pretty good at it.”