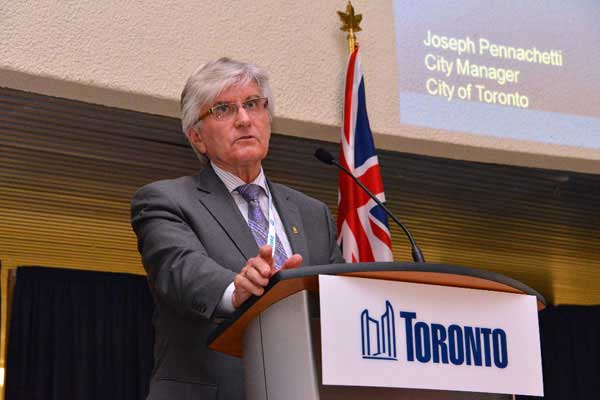 Joe Pennachetti, at the Global Cities Summit hosted by U of T's Global Cities Institute in May 2014, where the creation of the World Council on City Data (WCCD) to globally implement ISO 37120 was announced (photo courtesy the WCCD)

Joe Pennachetti, Toronto’s former top civil servant, says universities are the “ideal forum,” for sharing information and innovative practices among cities across Canada and around the world.

Both are places he turned to, he says, for expertise and research to guide policy as city manager of Canada’s largest city. In his new role at U of T, he is encouraging others to do the same.

Pennachatti will discuss his views on policy making in civic government with CBC radio host Matt Galloway today at a sold-out forum at U of T’s Munk School of Global Affairs. The event is co-sponsored by the IMFG and the School of Public Policy and Governance (SPPG) at the University of Toronto.

In advance of that event, he spoke to U of T News about the role he sees for U of T in supporting cities and the increasing importance of civic government.

Tell us about your new role at U of T.
I’ve had a relationship with the both the Global Cities Institute and the Institute on Municipal Finance and Governance for more than a decade. To me, the partnership was invaluable to get the best possible information and data that’s out there – in Ontario, Canada, the globe. Any city with limited staff could never do the global research that they are doing.  I am hoping to make that tie between municipalities and the university.

From your experience, what role do you see for U of T to help cities?
How we can learn from one another as cities, that’s where a university is the ideal forum for pulling it all together. At the end of the day, it is this type of research that is going to be invaluable to cities.  You start looking at the data and you solve problems that exist today and you are able to adapt to the challenges of the future, as well.

The federal government is about to make major investments in infrastructure. You were City Manager in Toronto during the last wave of federal infrastructure spending.  What’s your take on this latest investment?
I’ve never been so optimistic about the true collaboration of funding from the federal level to cities in Canada.  And don’t forget the province, as well.  I think they have acknowledged that the property tax in cities can’t fund the tens of billions of dollars in projects that are needed to meet new growth, especially transit. I think it is finally going to happen over the next 10 to 20 years.

Can we take the politics out of infrastructure funding?
I think you can take much of the politics out by coming up with a good sound allocation formula and ensuring that municipalities have input on what they deem to be priority projects. It should be: Here is a 10 year plan on funding. Give us your projects. Match them up. It is not rocket science.

What is your advice to cities, given your experience?
There is a huge window of opportunity. Don’t blow it. Because there is a strong political will aligned with a process, I think it is going to happen. All governments have to be seen working together. We have to be viewed by the public, the average businesses and resident as one government.  Cities deliver the lion’s share of services. The only thing that is hindering that is the proper mix of funding sources.

What about revenue tools such as tolls and high occupancy lanes? Will people ever be ready to have a discussion about new sources of funding?
It really has to be provincial governments sitting down with cities. Call it a funding summit.  You need an intergovernmental summit where cities are equal and you work out the money that is coming from the provincial and the federal government. If it means an extra 5 cents fuel tax or some toll money then so be it instead of dancing around studies every year. We need to come up with a mechanism, at least in Ontario if not across the country, of how we are going to fund these mega projects over the next 30 years.

Is this a time when the municipal level of government is coming into its own?
No ifs ands or buts. Thirty-nine years ago when I started in Edmonton and up until about 10 years ago we were referred to as “the third level of government.” That used to really upset me, but that’s the way it was. We were treated that way.

I feel strongly in the 39 years that I have been in this weird municipal world it has almost turned on its head. I believe we are treated equally now. For the average resident we deliver the core services – water, sewers, transportation, emergency services. The balance of the 21th century is going to be about urbanization. It already is.

Cities are the future. That term is used a lot and it is real. That’s why I believe strongly that the partnership among the three levels of government has to happen now. It has to be real. It has to lay out long- term plans that will avoid the infighting and bickering that has happened in the past. We have made huge strides with the collaboration of three levels of government. We have to continue it so we are really true partners and it is not just words.