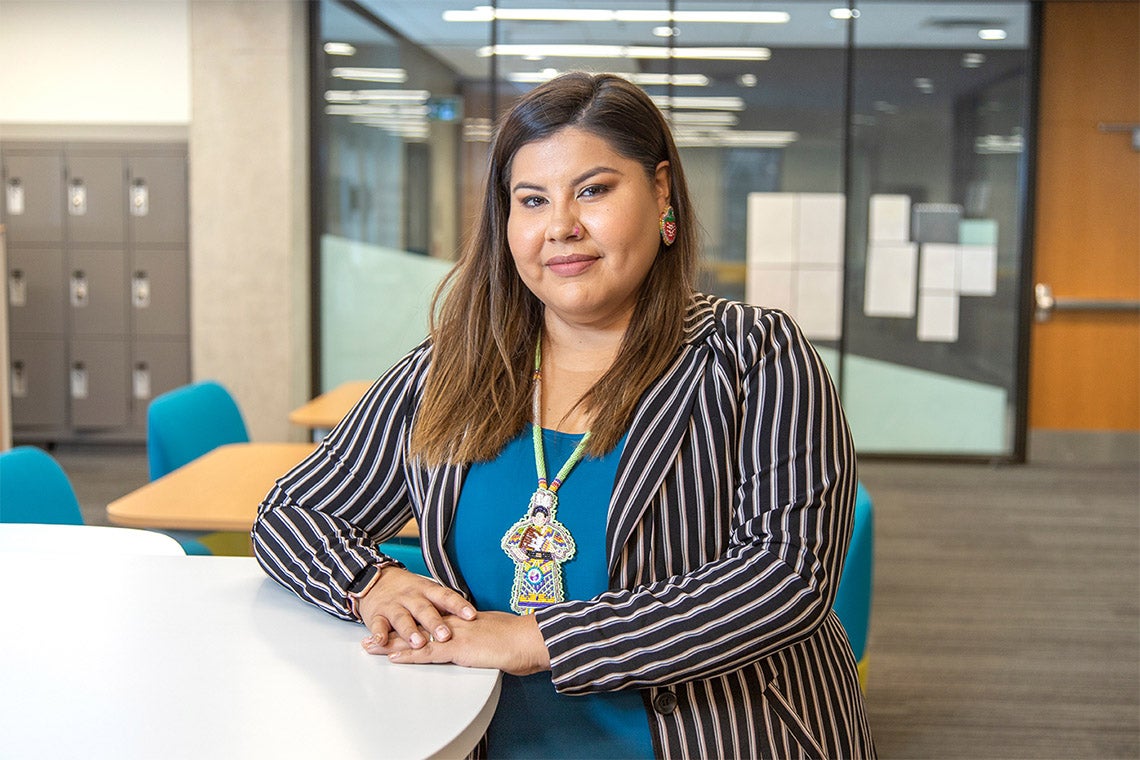 Tee Duke, U of T Mississauga's new assistant director, Indigenous initiatives, is focused on helping Indigenous students, staff and faculty find a place of pride on campus, and to develop a network of support (photo by Drew Lesiuczok)

In a photo, Tee Duke stands in an alley in Toronto’s downtown core. She holds a fan of feathers against her chest, partly covering the beaded regalia she wears to honour the jingle dress dance, which traces its origins back to her childhood home in Treaty 3 territory near Kenora, Ont.

For Duke, who now lives in Treaty 19 territory in north Mississauga, the image represents all that she holds dear as an Anishinaabekwe woman, a city dweller, a dancer and an educator – experiences she now brings to her new role as assistant director, Indigenous initiatives, at University of Toronto Mississauga’s Indigenous Centre.

Duke, who was appointed to the new position in November, will develop and implement Indigenous initiatives at U of T Mississauga, enhance Indigenous community relationships with both on-campus and off-campus communities and manage the Indigenous Centre. She will also work closely with her counterparts at the St. George and U of T Scarborough campuses to implement tri-campus initiatives identified in U of T’s response to the findings of the Truth and Reconciliation Commission of Canada.

“I’m excited to be part of this new priority at UTM and the University of Toronto, and to harness and strengthen the relationship between Indigenous and non-Indigenous communities,” Duke says. 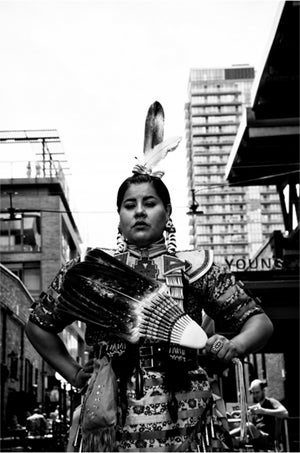 Duke (left) brings considerable expertise to her new position, with previous roles at Seneca College, York University and the Ontario Federation of Indigenous Friendship Centres, where she worked as an educator covering urban Indigenous culture, safety and residential school history.

Duke is focused on helping Indigenous students, staff and faculty find a place of pride on campus, and to develop a network of support.

“We need to find out what our Indigenous community looks like, but also how we can build stronger ties with our allies,” she says.

Duke is also looking beyond the campus to foster community support. “The Mississaugas of the Credit First Nation are absolutely pivotal to that vision,” she says. “We will also find opportunities to establish relationships with other Indigenous community members like the Métis Nation of Ontario and Six Nations of the Grand River.

“It’s extremely important to have the diversity of our community at the table.”

Above all, Duke wants the U of T Mississauga community to find a personal connection with the Truth and Reconciliation Commission of Canada and U of T’s response to the report.

“I want people to think about the role they have to play. It’s not just the responsibility of Indigenous members of campus – it’s everyone’s responsibility to meet those goals,” she says. “My work will ensure that there is a space and place where staff, faculty, students and community members can come together and create a vision to go forward.

“Education has been a negative experience for many Indigenous people. I come from a long line of residential school survivors. I am the first generation to not attend that system. They endured and suffered. My parents wanted to break that cycle of shame and guilt attached to identity. They taught us to be proud of who we are.

“Our community members might have fear or shame or guilt. That’s something that I want to make sure changes for them.”