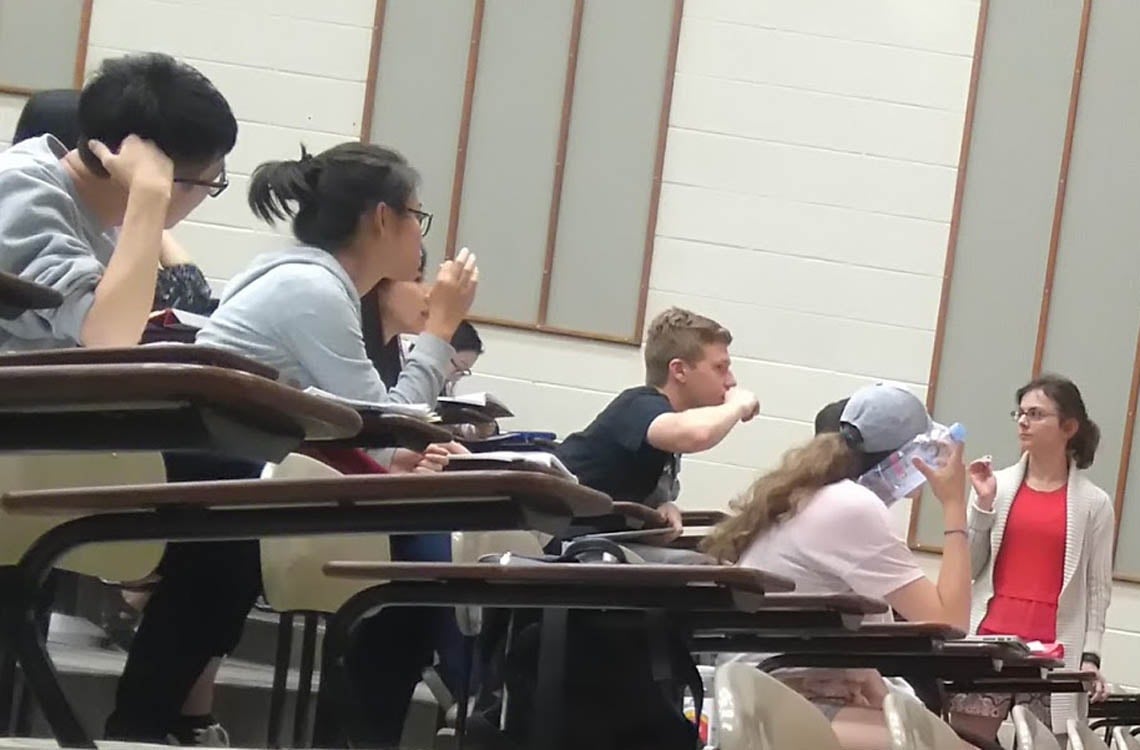 Mans are enrolling in this U of T linguistics course

Alex Motut, a PhD candidate in linguistics, is speaking to a class of about 90 in a lecture hall that normally services chemistry students.

“Does anybody remember what the definition of conversion is?” she asks.

A keener with a baseball cap in the front row supplies the answer: the process a word undergoes when it moves from one part of speech to another.

“Tweet converted from a noun to a verb,” Motut continues, choosing an example that all present could surely appreciate. “Facebook, on the other hand, has never been anything but a noun.”

The classic and the contemporary often converge in LIN204, English Grammar, one of the most popular offerings of the department of linguistics in the Faculty of Arts & Science.

As the syllabus makes abundantly clear, the point of the course is to analyze English, not enable its acquisition as a second language. All the same, most of the students who enroll are bilingual or trilingual undergraduates in disciplines other than linguistics who seek further insight into to the lingua franca of U of T and the wider world.

Not that BBC (or CBC) English is the only variety considered. Several minutes of this lecture are devoted to a discussion of the emergence of “man” as a street pronoun adaptable to multiple persons, genders and numbers. (“It’s her personality man’s looking at,” was a high-minded example expressed in the first person singular.)

Jenny Cheshire, a British linguistics scholar, has studied “man” as a phenomenon in multicultural London English. Now Derek Denis, a U of T alumnus affiliated with the University of Victoria, is working on its recent manifestations in Toronto speech, tweets and texts.

As the issue of “man” indicates, the study of linguistics today is primarily a matter of description, not prescription – however the followers of Henry Watson Fowler might prefer a more rule-driven approach.

“As linguists we don’t care so much about punctuation errors,” Motut, whose dissertation concerns syntactic theory, said in her office in Sidney Smith Hall. “We care about the structure, the mental grammar, the cognitive representation of language.”

For all its dedication to systematic analysis, linguistics relies heavily on intuition. Often a discussion in LIN204 starts with a consensus on whether a sentence or phrase sounds right or wrong.

“‘Dog is running down the street’ doesn’t sound so good,” Motut declares, and no one disagrees. A singular common noun usually needs a determiner or quantifier. (The, my, every and no are examples of valid candidates.)

How about “the red small parrot”? Good or no good?

Murmurs rise to a crescendo of animated chatter. No good. “Small red parrot” is how it should go.

“This is thought to be universal,” Motut points out. “The ‘colour’ adjective is closer to the head noun than the ‘size’ adjective.” Several speakers of languages other than English confirm this observation.

Yet another question: why do the sentences “I went to the bank” and “I went to the store” sound fine with definite articles when there is no reason to suppose the listener is familiar with the bank or store being referred to?

One student offers the theory that such sentences are holdovers from a simpler time when there would be only one bank or store in town. Another suggests that noun phrases like “the bank” are really abstract despite the specific look of the construction.

It is clear from the lively debate that most of the students – whatever their reasons for enrolling – are fully engaged in the subject.

Two fourth-year computer science specialists sitting near the back could be heard comparing sentences as the class dispersed. Both confessed to finding LIN 204 more thought-provoking than they expected it to be.

“Originally – and this might be a little offensive – we thought it might be an easier course, a break from our core courses,” said Sina Ghaffari, who arrived from Iran as a two-year-old and speaks Farsi as well as English.

“But honestly, it ended up being something I’m interested in. And it could be applied to some aspects of computer science, such as language processing.”

His friend Afsheen Rane, a native of India who retains only a smattering of Hindi, made the point that schooling these days in grammar is rudimentary at best. “What’s a noun, what’s a preposition: sure, this was taught,” Rane said. “But this is new material.”

Motut is aware that few of the computer science, engineering, economics and mathematics students who pack LIN204 semester after semester will pursue linguistics as a minor. No matter.

“I suspect that they hear by word of mouth that it’s an interesting and not super-difficult breadth requirement course,” she said. “But once they’re there, I feel I do have their attention.”