Innovation overseas: How U of T's Efosa Obano is supporting African entrepreneurs 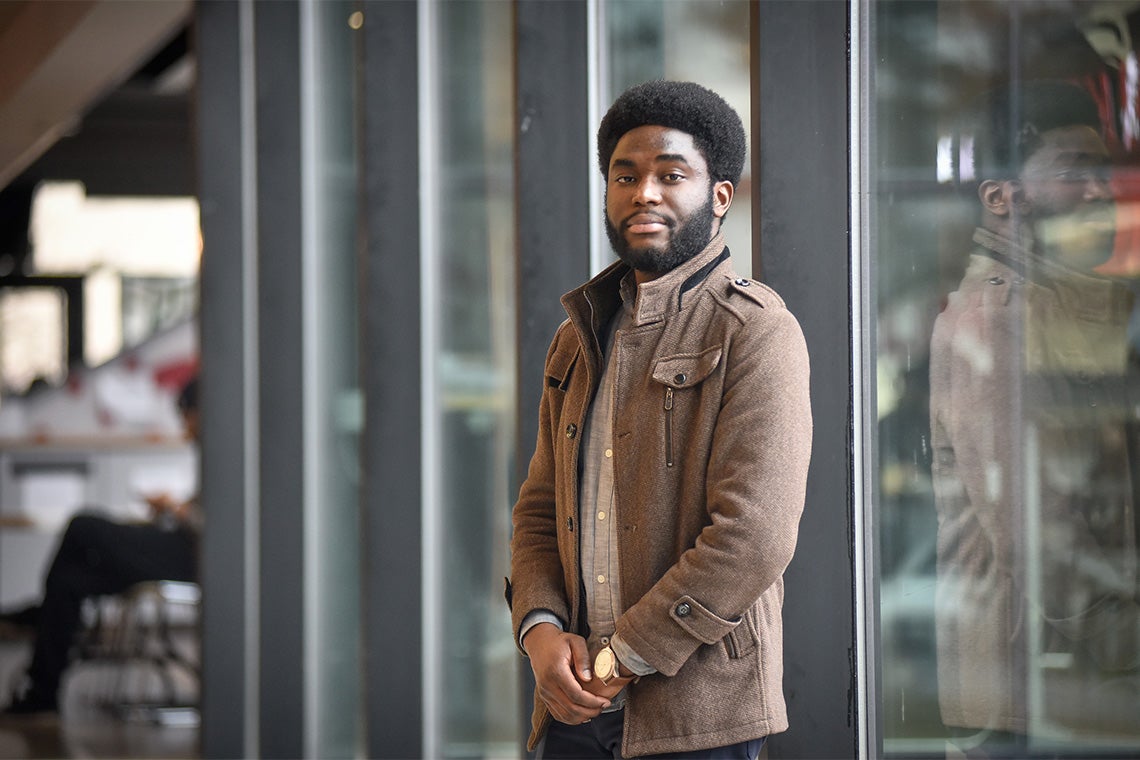 Efosa Obano wants to see more young Black entrepreneurs getting the necessary mentorship opportunities and resources to turn their ideas into solutions to some of the world’s biggest problems.

“It’s already hard enough being Black or being African,” said the University of Toronto Scarborough management alumnus who is currently working as the social impact pillar lead at Dell Technologies Canada.

“When you combine that with the lack of credibility, lack of experience, lack of financial backing, lack of opportunity and lack of guidance through various projects, it can be crippling.”

Obano helped launch the African Impact Challenge – a youth-focused approach to addressing issues on the African continent through innovation and entrepreneurship – during his undergraduate studies at U of T Scarborough. It was recently recognized by the United Nations, having been named one of the top 50 solutions in the UN Sustainable Development Solutions Network’s 2020 Youth Solutions Report.

The official announcement, which included distinguished guests such as Pope Francis and former UN Secretary General Ban Ki-Moon, took place this past December. In the pre-pandemic world, the recognition would have included a trip to the Vatican for an award ceremony.

“It was very fulfilling and very heartwarming,” said Obano. “What really excited me the most was being face to face with all these people who are trying to fix all sorts of problems all over the world.

“It was very inspiring and I was very grateful for it.”

Eight years ago, Obano never imagined being in this position. He arrived in Toronto in 2013 as an international student from Nigeria. He spent his first few months getting used to the cold weather, familiarizing himself with the new environment and making new friends. But he also spotted a need to create a community that would bring together students from Africa like himself. Together with a few of his friends, he started the African Students Association.

William McConkey, an assistant professor, teaching stream, in the department of management who became Obano’s mentor, says Obano displayed two necessary traits for an entrepreneur. “He had the vision to do something worthwhile for a community that wasn’t being done, and he wanted to solve a real problem,” said McConkey, who has supervised dozens of students over the years.

“He also showed a real practical dimension to it. He started off by getting a mentor,and then he started by getting some major contributors from the students’ side.”

In the summer of 2016, Obano and a few colleagues launched the African Impact Initiative. The goal was to create a platform that would help young Africans to do more than just talk about the problems affecting their countries of origin.

By December 2018, they had raised enough money to fund a small health-care project in a rural southern Nigerian community. Through their research, they found many people in the community who were facing health issues relating to blood pressure and high infant mortality rates. In partnership with a local hospital, the team was able to get health-care equipment to help revamp a small clinic.

After returning to Canada, Obano received news that the clinic was overflowing and babies were born using the equipment they helped secure.

“We learned it couldn’t be sustainable unless we found a more efficient way to do things and continue to be involved in communities on a permanent basis,” he said. “We also realized that the need was so great that, over time, we would want to try and do a project in each African country.”

That long-term goal came with a new approach: to push innovations from within the African countries themselves, nurturing and grooming home-grown solutions. In 2019, the team started the African Impact Challenge. The group has already finished its second project in Ghana. Kenya and Rwanda are next, with further plans to partner with young innovators in at least five countries by 2025.

At the annual African Impact Conference in 2020, Obano spoke to Wisdom Tettey, vice-president and principal of U of T Scarborough, about the group’s expansion plans. Tettey told him about U of T’s True Blue Fund, a fund-matching program that supports emerging entrepreneurs. Within the next couple of months, the African Impact Initiative had secured a five-year partnership.

The main tenets on which the African Impact Initiative is built line up with those of another important program at U of T Scarborough from which Obano drew support: The Bridge.

“Efosa and his team really put in the hard work and the right planning, and it’s terrific to see them getting the accolades and recognition they deserve,” said David Fenton, The Bridge’s industry partnerships, innovation and work-integrated learning lead.

Obano has recently joined U of T in an advisory capacity to support and guide young Black entrepreneurs, a role he cherishes as it reminds him of where he started from and how it matters that young Black people get a boost.

“We want to help these young entrepreneurs, whether they’re current students or even alumni, to really take their ventures to the next level regardless of which stage they are at,” he said.