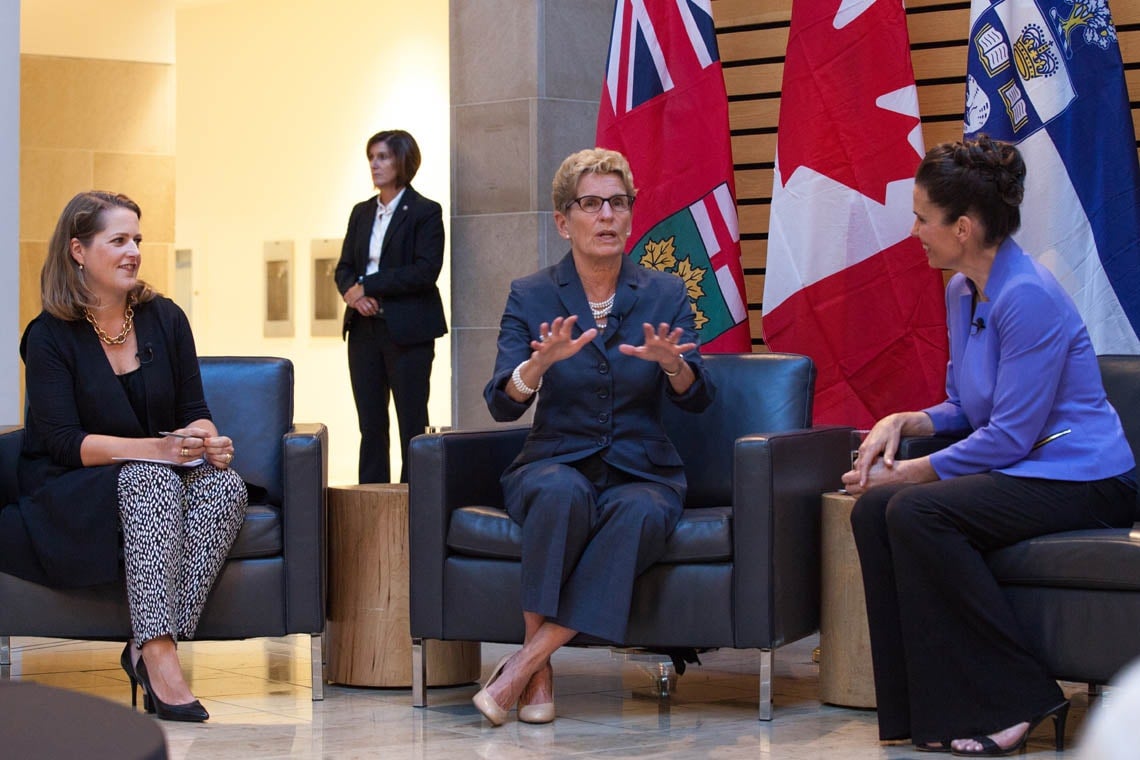 Without a diverse workforce that taps into women, Canada and the world is losing out on truly embracing innovation, Ontario Premier Kathleen Wynne told the Americas Competitiveness Exchange (ACE) on Innovation and Entrepreneurship.

“Having only half the population involved and not the other half makes no sense,” she said as part of a fireside chat with federal Science Minister Kirsty Duncan at the University of Toronto on encouraging more women to get involved in science, technology, engineering, mathematics and computer science (STEM) fields.

Duncan agreed: “We don’t want to lose our talent . . . We need to not only attract young women, we need to retain them. This is a complex issue that involves all of us.”

When you include different voices in the lab, classroom or boardroom, different questions may be asked, different methods used and perhaps different results may arise, she said. That’s the key to innovation.

The chat, moderated by eBay Canada’s managing director Andrea Stairs, kicked off ACE’s visit to the university campus after spending the previous day at MaRS hearing from U of President Meric Gertler and meeting with young life sciences startups from the university.

This is the first time Canada has hosted ACE. The weeklong event has attracted almost 50 participants from governments in the Americas, as well as India, Israel, Germany and Korea.

The ACE seeks to strengthen personal and professional relationships among the growing economies in the Western Hemisphere. After previous visits to the American Midwest and Argentina, this time around participants are visiting successful centres of innovation in Ontario to hopefully spur greater commerce and trade, as well as collaboration.

Women represent the majority of young university graduates, but are still underrepresented in STEM fields, Statistics Canada has reported.

For example, only about 25 per cent of all undergrad engineering students are female, Duncan said. And the numbers for women in all STEM fields drops dramatically “because of a leaky pipeline as you go to masters and beyond.”

At U of T, about 39.6 per cent of incoming first-year engineering students at U of T this year are female – a huge increase, engineering Dean Cristina Amon said in a later panel to applause from the audience.

Getting women and minorities interested in science, technology, engineering, mathematics and computer science — and staying involved — is an ongoing effort.

Mentorship is important, as is creating fun opportunities to engage young people in the sciences like teaching girls to code. It’s also important that they see people like them in these fields so they know it’s possible for them to succeed, too, the premier said.

“If you can see it, you can be it,” added Stephanie Foster, senior adviser and counselor to the ambassador-at-large for global women’s issues, U.S. Department of State, in a followup panel on the issue.

That need for visibility is real. Diverse leaders, including women, who have made inroads in STEM fields need to reach out to young people, Duncan said as she told a heart-breaking story of meeting with a female high school student two weeks ago who told her “if science doesn’t look like me, I don’t want to be part of it.”

“I’m rare,” said Trina Alexson, director of advanced sciences at Cisco Systems Canada. “I’m a mom and an engineer. There aren’t many of us out there. That’s why we need to be out there” to speak with young women.

Wynne, who meets with women whenever she travels across Canada and internationally, said there are a lot of shared experiences about why it’s been hard to increase numbers of women and minorities in STEM fields — as well as in the increasingly important arena of startups.

A chance meeting with an Ontario woman involved in the tech sector led the premier to have her people “pull apart” how the government provides financial support to startups to see if there was an implicit bias present, i.e. rewarding only certain types of innovation.

“There are barriers to women getting venture capital [for tech startups] that there aren’t for men,” Wynne said. “We need to find out if there are things we’re doing that are exacerbating the situation.”

And the conversation would be incomplete if it didn’t involve a frank discussion about making women and minorities feel safe in the classroom and workplace when they might be the only person like them there.

“I was often the only woman in the room,” said Duncan, who started her career as a scientist before turning to politics. “Hard things come up [like] being asked when are you planning to get pregnant? Why am I am getting paid in the 10th percentile [compared to male co-workers]?”

Wynne noted that research has shown women will leave STEM fields if there are few females around but “when there women, they will stay.” This doesn’t mean “women are weak or need to be coddled,” she explained.

Creating networks are a big help to making women feel like they belong and thrive, the two panels agreed. At U of T, Amon said the engineering department has tapped its extensive alumni network to help open doors and provide advice for female students. At Cisco, they have mentoring circles at work and a leader in place who openly talks about wanting a more diverse workforce, which sets the tone from the top.

Although the struggle continues, there is reason to be optimistic, Genviève Tanguay, vice-president of emerging technologies -- national infrastructure and future technologies with the National Research Council, told the audience.

“Things are changing,” she said, noting the growing numbers of young women like her daughter taking part in advanced courses in math and sciences in Quebec’s CEGEP (pre-university college), as well as their participation in science competitions. “I’m starting to get worried for the other half!”