Infants 'very strategic' when deciding how much effort to expend on a task: U of T study 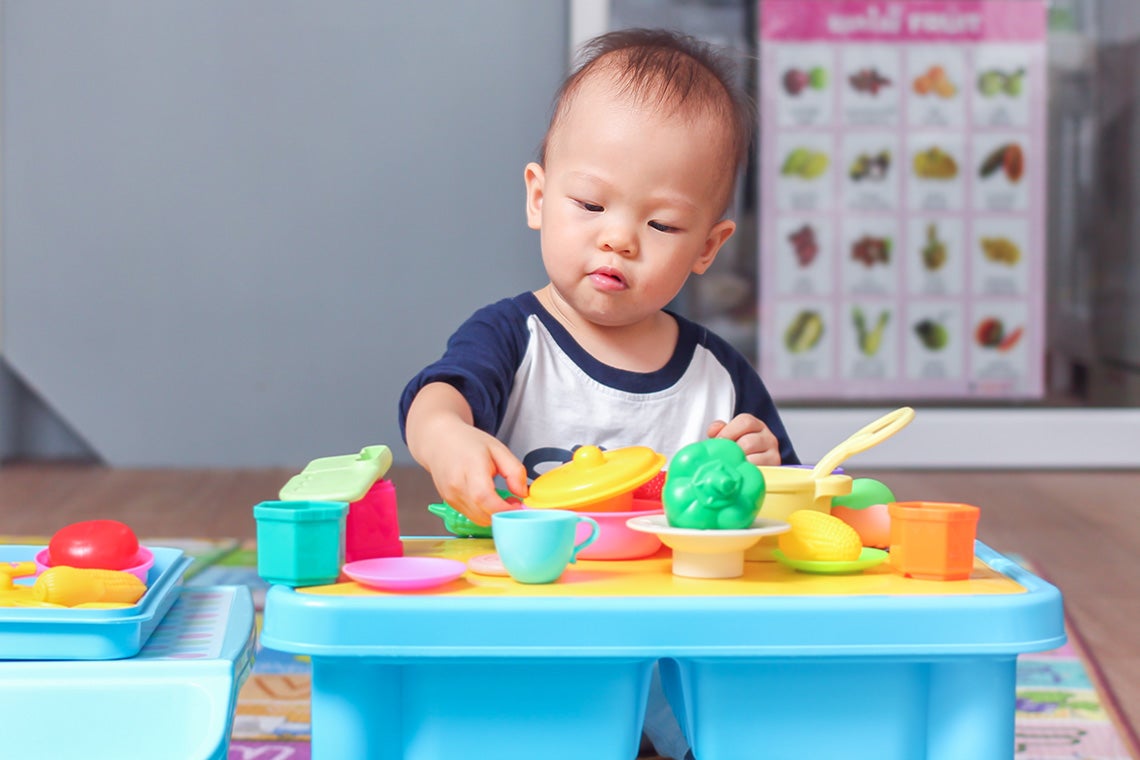 The study by researchers at U of T and two U.S. universities suggests infants don't try things at random or simply mimic what they see adults doing (photo by Yaoinlove via iStock)

They might not speak in complete sentences yet, but 18-month-olds are surprisingly savvy when it comes to deciding when and how to try to and reach their goals.

A new study from researchers at the University of Toronto, Arizona State University and the University of Washington suggests infants do not try things at random or simply mimic what they see adults doing. Instead, they combine information from their own first-hand experience with the experiences of other people they observe to decide whether to persist in trying to solve a problem.

The results of the research, published today in the journal Nature Human Behaviour, have implications for how people learn.

“The most remarkable thing we saw was how quick infants are to discern when to ask for help with something, and from who to ask for it,” said Jessica Sommerville, a professor in the department of psychology in U of T’s Faculty of Arts & Science and a senior author of the paper.

“Small children are very strategic in their behavior.”

The findings provide new insights into the role of persistence and the decisions made when attempting to complete a task.

“Persistence matters and plays a role in learning and life outcomes like school performance and emotional well-being, but effort is a limited resource,” said Kelsey Lucca, an assistant professor of psychology at ASU and lead author of the paper. “We wanted to understand how infants use what they observe and what they do when deciding when and how to try, so we looked at how infants reasoned through the most effective ways to meet their goals.” 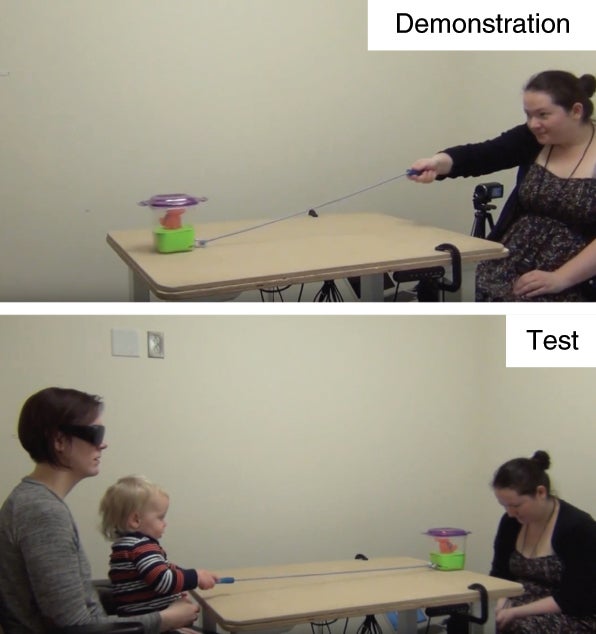 Only infants who watched the researcher struggle, but ultimately succeed in pulling the box – and the toy inside – across the table persisted in trying to move the box even when it was secured to the table (image via Nature Human Behaviour)

The research team devised an experiment that provided 18-month-old infants with social cues and first-hand experience when solving a problem. Each of the 96 infants who participated in the experiment sat on their parent’s lap at a table. Just out of reach on the table was a clear box with a toy inside. The box had a rope attached to it and a researcher seated at the table showed the infant how the rope could be pulled to bring the box, and the toy inside, within reach.

Then it was the infants’ turn to try. Unbeknownst to them, the researchers had switched the box for one that was affixed to the table and impossible to move. The infants had three chances to move the box, and on each attempt the research team measured how much time they spent pulling the rope and how hard they pulled.

“This finding suggests that the toddlers engaged in a sophisticated decision-making process, similar to how adults might create a list of pros and cons and use it to influence their choice,” said Sommerville. “The toddlers computed the utility, or usefulness, of trying to move the box by weighing the potential costs of what they had to lose – whether it was worth it to keep pulling the rope – against what they had to gain in terms of the likelihood they could access the toy.”

After the trials with the immovable box, the research team again switched the box – this time for one that could move. All three groups of infants successfully moved the box and accessed the toy inside.

The research team also examined whether the infants showed help-seeking behaviors like pointing or reaching toward the box. On the attempts when the box was affixed to the table and impossible to move, the infants only sought help when they actually needed it. They did not ask for help on the trials when the box was moveable.

The infants who saw the researcher easily move the box requested help more than the other two groups, which indicates the infants only sought help when they knew it would be useful.

“The infants who saw the experimenter easily move the box traded off trying for help-seeking, suggesting that they realized the most adaptive strategy in that context was to get help from someone who can solve the problem,” Lucca said. “The infants who saw the experimenter struggle but succeed needed the least amount of support to solve the task – suggesting that demonstrations of hard work and effort have carry over effects that impact infants’ motivation in future tasks.”

The team also assessed whether the infants’ facial expressions showed positive or negative emotions while they tried to move the box. Those who saw the experimenter easily move the box showed the most frustration because their expectations for what was supposed to happen, the researchers suggest, did not match what they experienced. These infants also required more prompting than the other groups to try to move the box when it had been switched to one that could move.

“It seems intuitive that the experience of kids facing a challenge is inherently frustrating, but we found that the mismatch between expectations and experience is actually what is frustrating,” Sommerville said. “Setting appropriate expectations for kids about difficulty and effort doesn’t dissuade them – it lets them scale their expectations so when something is hard to do, they can choose to keep trying.”

Rachel Horton from the University of Washington also contributed to the study, which was supported by the Society of Research on Child Development and the Eunice Kennedy Shriver National Institute of Child Health and Human Development.