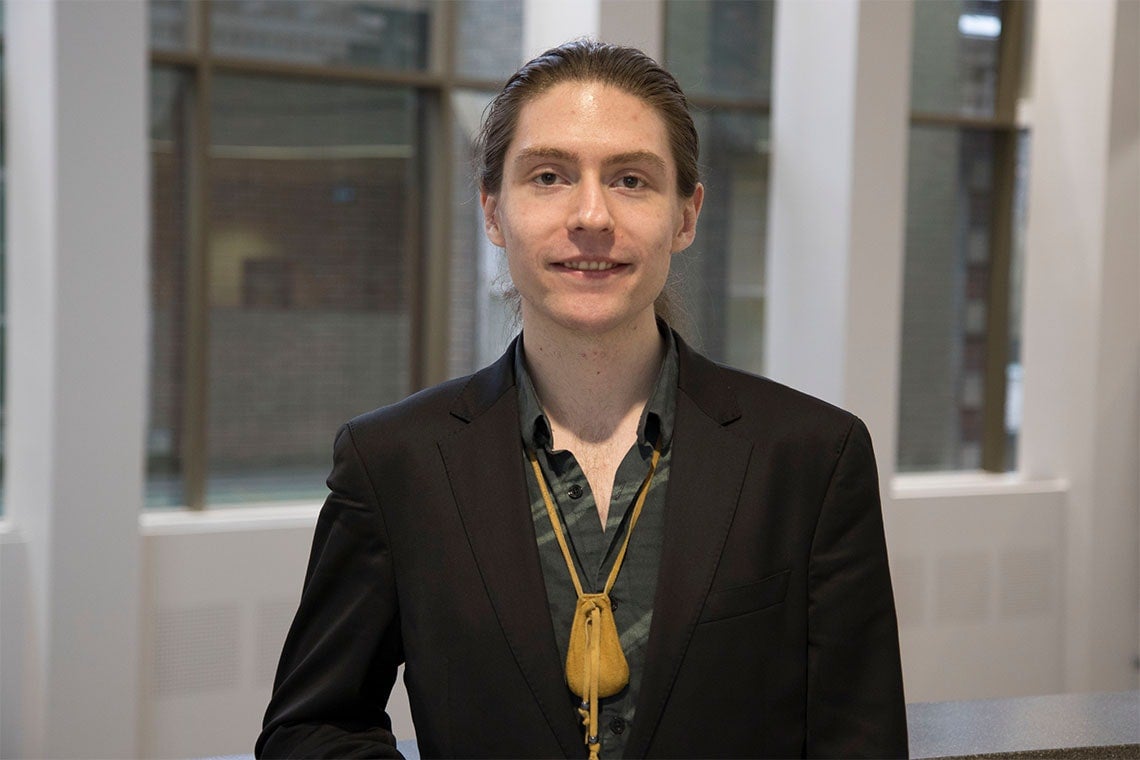 When Zachary Biech – a descendant of the legendary Chief Poundmaker – first arrived at U of T he had little connection to his Plains Cree ancestry.

By the time he finished his degree in Indigenous studies, Biech (who describes Poundmaker as his uncle of seven generations) was well on his way to becoming an engaged student leader.

Biech, now a first year law student, has been asked to be a flag bearer at Saturday's first-large scale powwow in decades. The powwow is organized by the Indigenous Studies Student Union, which he founded less than two years ago.

Read more about the powwow “I’m unbelievably proud,” says Biech. “I get emotional when I think about it,” he says.

Raised in Alberta, first in Calgary and then later in Cochrane, Biech says he had little contact with the Plains Cree communities.

Biech says his family as a whole had struggled with intergenerational traumas stemming from Canada’s colonial policies. Over time, his family became fragmented. In high school, Biech says he began to learn more about the history of Indigenous peoples in Canada.

“They didn’t tell us very much, but I always got fired up,” he says, “because I knew… that’s my family, those are my relatives.”

When Biech arrived at U of T, he took a Canadian politics course with a teaching assistant who was interested in Indigenous studies.

“Again, I was fired right up,” says Biech.

That summer, Biech says he began volunteering at the Native Canadian Centre of Toronto and met people in Toronto’s Indigenous community that helped solidify his path.

“I didn’t realize how hungry I was for that basic foundation. For that kind of knowledge,” he says.

In 2015, Biech and two friends in Indigenous studies at the Faculty of Arts & Science decided it was time the faculty had a student union to call their own with a consitution informed by indigeneity. This meant creating a group that avoided hierarchies and advocated for decision-making to be collaborative.

By fall 2015, the Indigenous Studies Student Union was born. Now, less than two years later, Biech has moved on to law school, but the student union he helped found is thriving. It has hundreds of members and hosts dozens of events across U of T, including Saturday's powwow, Honouring Our Students Pow Wow and Indigenous Festival, which is free and open to the public.

Read the Metro News story about the powwow

The Indigenous Studies Student Union has also been awarded the Sanjeev (Sanj) Dewett Course Union of the Year Award by the Arts and Science Student's Union, which will be presented officially to the union on March 22.

“The group is meant to be a symbol of hope, and I think it’s living proof because it shows a small group of friends with a good idea really can change everything,” says Biech.

Inspired by his ancestors – like Chief Poundmaker (pictured above, courtesy of Archives Canada), and celebrated scholars Freda Ahenakew and Edward Ahenakew – Biech says as he continues to study at U of T, he remains dedicated to standing up for his people.

“It was the greatest gift to me to come here and learn about my people, my culture and other Indigenous cultures," he says.