With an Indigenous lens, U of T grad Shanna Peltier focuses on youth and mental health 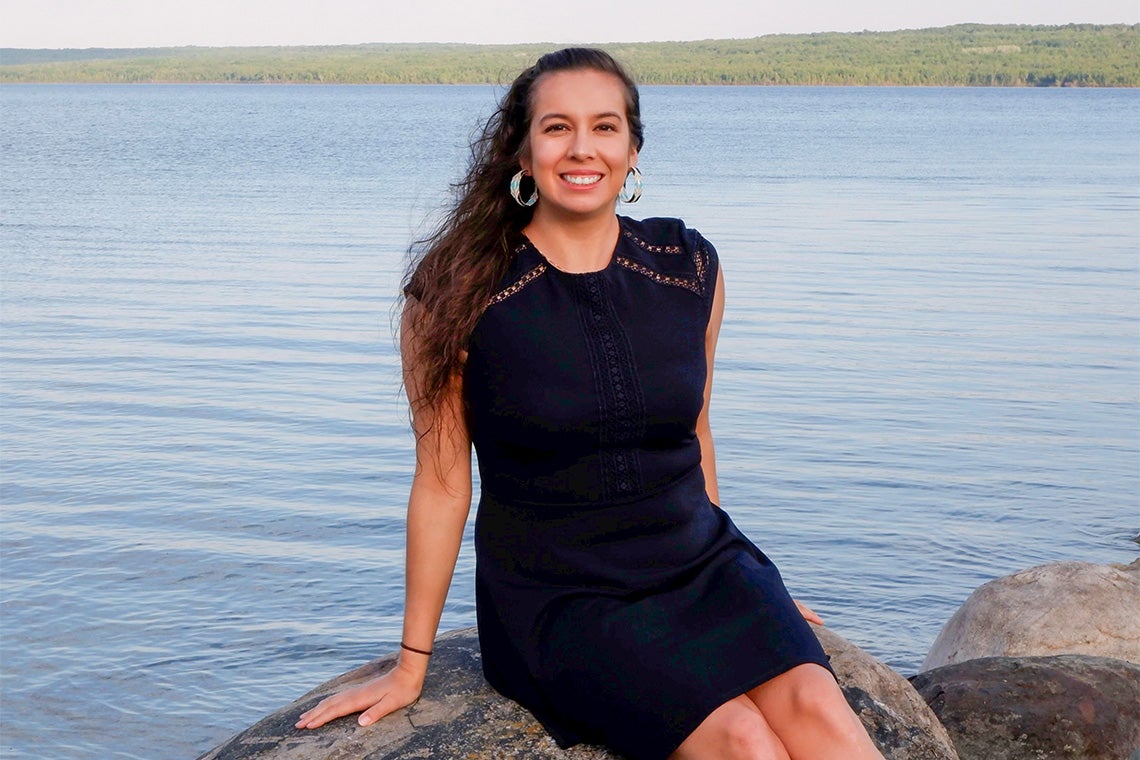 Shanna Peltier remembers when her graduate research lab consisted of herself, two colleagues and a couple of laptops.

Fast forward three years and Peltier, who graduated this spring with a master of arts in school and clinical child psychology from the Ontario Institute for Studies in Education, is awed by how much the Critical Health and Social Action (CHSA) Lab has grown – and how she has grown as an academic.

“It was what I needed in order to succeed,” says Peltier, who is an Anishinaabe kwe from Wikwemikong Unceded Territory on Mnidoo Mnis (Manitoulin Island). “When I think about my path into graduate school, I just feel like I have always said yes to the opportunities that felt the best.

“Joining a lab where I would have a lot of one-on-one support with my supervisor was instrumental in maintaining my mental wellness throughout this program.”

With her doctoral studies already underway, Peltier is looking forward to deepening her understanding of mental health, wellness and life promotion – especially in Indigenous children, youth and families.

Her research, focused on youth suicide in Indigenous communities, seeks to understand why Indigenous Peoples are disproportionately affected by suicide and society’s role in the issue.

Her approach combines seeking justice for Indigenous communities and the world of clinical psychology.

Assistant Professor Jeffrey Ansloos, who leads the CHSA lab, opened Peltier’s eyes to community psychology and critical suicide studies, as well as groups looking at mental health in a way that centres justice. “It was a very pivotal turn in the way that I looked at mental health and pursuing wellness for Indigenous people,” Peltier says.

Ansloos, who is Canada Research Chair in Critical Studies in Indigenous Health and Social Action on Suicide, says Peltier is an exceptional teammate in the lab.

“Shanna has brought a tremendous amount of leadership to the Critical Health and Social Action Lab at OISE. She has a strong commitment to leading by example in co-mentorship, prioritizing a deep reading and writing practice, and bringing a spirit of joy and authenticity to our work,” says Ansloos. “She is also immensely talented in project co-ordination and research administration – an often under-acknowledged, but critically important, aspect of university and community-engaged research.”

The praise is reciprocated.

“I don’t know how long I would have lasted in this program without an Indigenous supervisor who was as kind and caring as Dr. Ansloos,” Peltier says.

“He really understands some of the challenges that you face as an Indigenous person pursuing an academic path, and having to carry the weight of all those narratives on your shoulders.”

Peltier says she has always wanted to help Indigenous communities, particularly children and youth. As she began her journey to understand the nature and structure of suicide, she wanted to challenge the dominant mental health narrative that frames Indigenous Peoples as unable to pull themselves up from something harmful.

“I try to pull the burden off the shoulders of the person because that's been the narrative for so long,” she says. “I pursued this work out of a genuine, passionate love for my people and Indigenous communities at large. I want to see a world where suicide is no longer a consideration on the minds of Indigenous young people in this country.”

Her time at OISE has been defined by growing relationships with communities in British Columbia and Ontario, including Yúusnewas, an Indigenous youth-led program that provides opportunities for Indigenous youth to build skills and knowledge to take care of one another.

In this work, Peltier has stood out. Yet, Ansloos says Peltier would hate being singled out because it contradicts how she positions her work as an Indigenous feminist, “which is foremost about unsettling the patriarchal and colonial impulses of the academy, which sorts and divides those mutually invested in freedom from oppression and domination into isolating and depressing hierarchies and siloes.

“Her work is helping to emphasize something different: mutual aid and lifting those in her community, including fellow students. This extends to the ways she positions young people in her research as equal and vital partners in producing knowledge related to well-being and mental health.

“In the field of psychology, Shanna’s work and leadership is what many of us have long been hoping for. Shanna foregrounds critical analyses of power in psychology, emphasizes the societal contexts and structural drivers of distress, and reframes questions of suicide prevention towards questions of life promotion.”

Peltier’s work is “collective and collaborative,” says Ashley Caranto Morford, an assistant professor of English in the department of liberal arts at the Pennsylvania Academy of the Fine Arts.

Morford and Peltier co-facilitated the Jackman Humanities Institute Black, Indigenous, and People of Colour Solidarities working group alongside two other colleagues, Sewsen Igbu and Kaitlin Rizarri, this past academic year.

Morford co-facilitated the group while in the latter stages of her doctoral studies at U of T’s department of English and the book history and print culture collaborative program.

Peltier led the creation of a zine, filled with writings, photographs and art of working group members. The pieces reflected on processes of decolonization, abolition, solidarity, justice and future-making. They were discussed in monthly working group meetings throughout the academic year.

“Shanna’s work is relationship-building, relationship-sustaining and kinship-making,” says Morford. “It is rooted in action, bringing theory and practice together in transformative ways that challenge and refuse oppressive systems and modes of being. In her actions, both within and beyond the academy, Shanna reveals a commitment to bringing better and more just futures into being.”

Peltier has taught Morford a great deal about her own scholarship – specifically about “ethical, responsible and love-filled approaches to research,” and the importance of honouring one’s values and principles first and foremost.

Morford and Ansloos each reflected on Peltier’s graduation and looked forward to her next steps.

“As a suicide prevention scholar and psychotherapist, I hope that Shanna continues to pursue those things that nourish her personal and community’s collective joy and sense of vitality in living,” says Ansloos. “While our work often deals with immense grief and pain, it is vitally important to hold close those things which nourish life and continue to prefigure those decolonial futures we dream of.”

Morford, meantime, hopes Peltier continues to follow, speak and honour her truth unapologetically: “Congratulations on all of your recent accomplishments, Shanna! You are doing such wonderful, life-nourishing and world-transforming work, and it has been such an honour to witness and be part of your journey. The world is a better place because of the thoughtful, caring and kind work that you do.”

Peltier is humble and reflective as her academic career reaches this new milestone.

“When you get into grad school, all you have is nerves and anticipation,” she says. “Having been in it a few years now, I'm really excited to feel that sense of accomplishment.”

It’s in places like her home in Wikwemikong Unceded Territory where Peltier hopes to have the biggest impact after her doctoral studies are completed. She’s considering following in Ansloos's footsteps by starting her own research lab –  “a pocket of resistance within the institution, where we can dream up the types of worlds and justice that we want to see for our communities.”