'I wanted to do everything I could': U of T Scarborough student recognized for saving stabbing victim's life 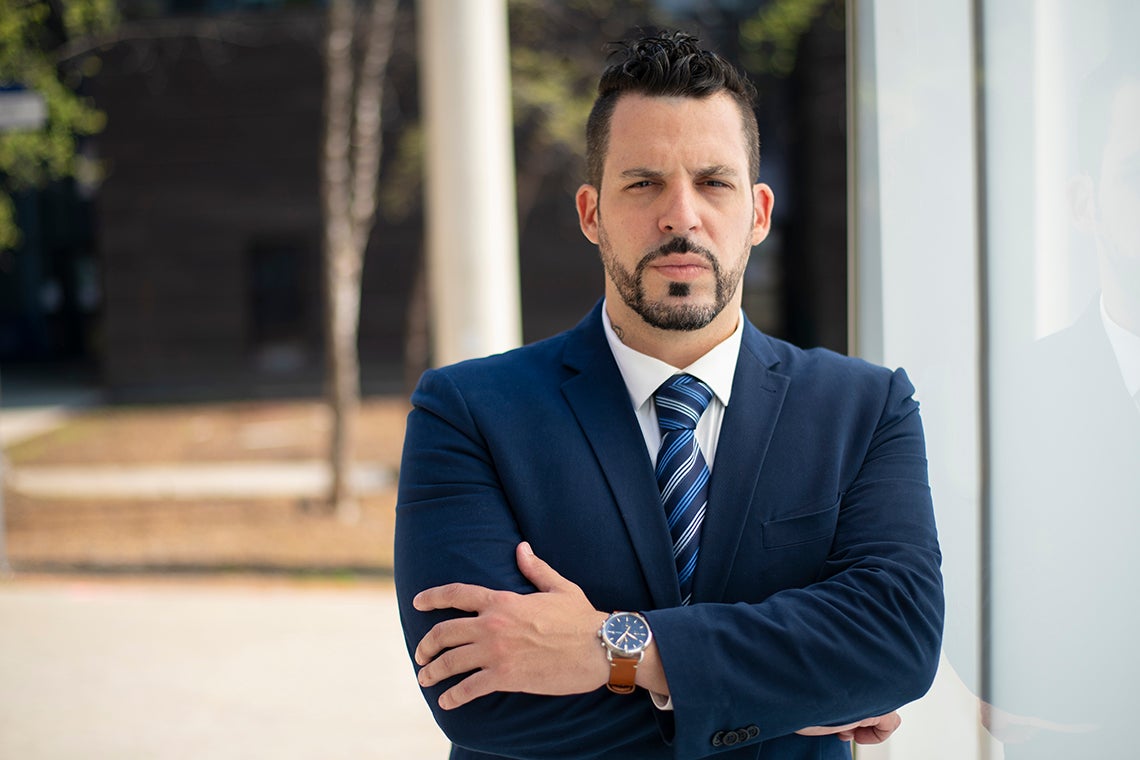 Chris Luongo, a political science student at U of T Scarborough, recently received a Canadian Red Cross Rescuer Award for helping save the life of a stabbing victim while he was at a restaurant with his young daughter (photo by Don Campbell)

Chris Luongo was waiting to buy his daughter a McDonald’s Happy Meal when he felt something graze his shoulder. He turned around to see a teenager, covered in blood, faintly ask, “Call 911.”

“It was surreal,” says the third-year political science student at the University of Toronto Scarborough. “When I initially saw him, I had to make sure it wasn’t a TikTok or YouTube prank.”

But Luongo quickly grasped the gravity of the situation when he saw a long trail of blood. “I knew it was serious, and I needed to do everything I could to help.”

After gesturing to his daughter to sit tight, he asked restaurant employees to call 911 and to pass him gloves and towels.

By this point, the teen had fallen to the ground from a significant loss of blood. So, Luongo asked two bystanders to elevate the victim’s legs to help circulate blood to his vital organs. Their efforts succeeded and the teen regained consciousness.

“I remember him repeatedly saying ‘I can’t breathe,’” says Luongo, who rolled the teen onto his side to clear his airway. “It was such a relief to hear him breathing again.”

Luongo says he knew the most critical step was to stop the bleeding. After locating the stab wound under the teen’s left armpit, he pressed down on it as hard as possible. Having secured the injury, he began asking the teen questions that might help with a police investigation.

Meanwhile, as he was attending to the teen’s wound, he asked the crowd that had gathered around them to move aside so he could make sure his daughter was still safe. One of his biggest concerns, he says, was to shield her from the traumatic incident. To his surprise, a woman and a teen were sitting with his daughter, and had even given her a cell phone to play with as a distraction.

“I became filled with so much emotion – not only from caring for the stabbing victim, but also from seeing two strangers go out of their way to help my daughter.”

When paramedics arrived, Luongo was able to transfer pressure on the wound. The last time he saw the teen, he was being brought outside on a stretcher into a waiting ambulance.

He says he remembers being asked for a hug by the woman who helped his daughter and a few of the bystanders who witnessed what happened, as well as walking through the scene twice with police investigators.

He also made sure his daughter finally got something to eat.

“One of the most challenging things following the incident was trying to keep a poker face to keep her as calm and relaxed as possible,” he says.

Luongo says he spent days worrying whether the teen was OK. Good news arrived a short time later when the lead police investigator called to tell him the teen had survived, and that the paramedic who reviewed CCTV footage of the incident wanted to recommend him for an award.

For his actions, Luongo earlier this year received a Canadian Red Cross Rescuer Award, which is given to non-professional or off-duty first responders who volunteer to save a life.

In the award citation, the responding paramedic said, “Without Chris’s quick, calm action and heroism, this injured person would have bled out and died. The young man is alive today because of Chris’s actions.”

Luongo says he is mostly grateful that his daughter wasn’t traumatized by the incident.

“My daughter means everything to me. I’ve reflected on what happened, and I think a big reason I did what I did is because I am a parent,” he says.

“I couldn’t imagine my child not coming home, not being able to hug her or hold her again. In the same way, I wanted to do everything I could to help that teen make it home to his family.”

Luongo, who is the first in his family to attend post-secondary school at the university level, initially enrolled at U of T in 2003 but had to leave after one semester in order to help support his family. He later re-enrolled at U of T Scarborough in 2018 as a mature student, studying political science, public policy and anthropology. He was also diagnosed with post-concussion syndrome, the result of suffering multiple concussions while playing football in high school, and says he has personally overcome many physical, cognitive and emotional challenges over the past decade. He’s says he is thankful for the additional supports he’s received through AccessAbility Services since 2020.

Luongo hasn’t let his diagnosis limit his potential. In addition to playing goal on the champion U of T Scarborough intramural soccer team, he was also nominated for a Scarborough College Athletics Association award and continues to maintain a high GPA. His goal is to attend law school and become a lawyer.

“Hopefully this story can inspire others to believe in themselves and the importance of working hard in pursuing their dreams,” he says. “I also want to encourage people to look out for those around them, to positively influence their lives with compassion and care – especially in times of need.”