Hummingbirds enter overnight hibernation-like state to save energy for long trip south: U of T research 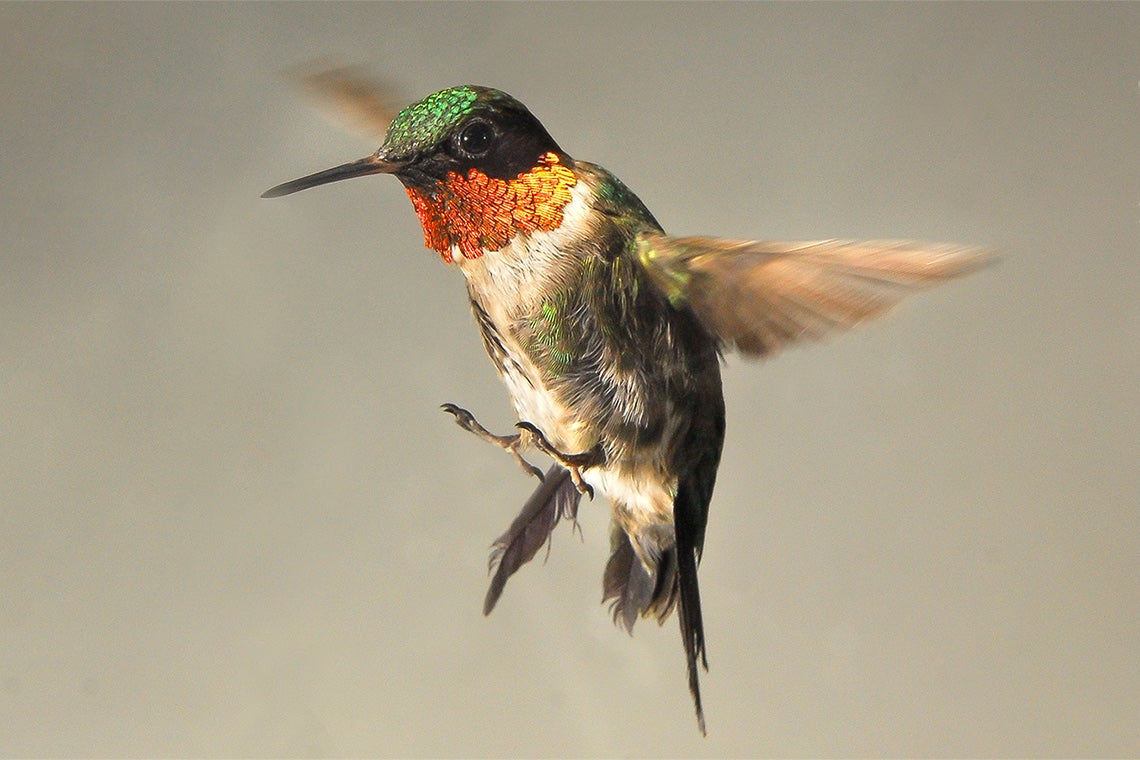 Hummingbirds’ metabolisms are so fast that they face an ever-looming threat­­: running out of energy and dropping dead. That’s why the birds evolved a physiological trick, an ability at the centre of a new study by researchers at the University of Toronto Scarborough’s Welch Lab and Western University.

It’s called torpor – a state similar to hibernation, in which a hummingbird's body temperature drops 20 degrees or more and their metabolic rate slows by up to 95 per cent. The researchers suggest hummingbirds use this ability strategically.

“They're basically shutting off at night and then just waking up in the morning like they arose from the dead,” says Erich Eberts, a PhD candidate at U of T Scarborough and lead author of the study into torpor and hummingbirds. The paper was published this month in the journal ELife.

Eberts spent three years trying to determine the rules of torpor – that is, when and how much energy a hummingbird has when it goes into that state. He was shocked at how clear the numbers were.

“I wondered if he would observe enough instances of torpor to tell what the patterns were,” says Kenneth Welch, associate professor in the department of biological sciences. “About halfway through that first summer, he was getting birds going into torpor almost every night. But not long after, he said, ‘The birds are suddenly doing something very different.’”

In fact, torpor in hummingbirds does appear to follow rules – seasonal ones. In early and mid-summer, when male hummingbirds stay light and agile to defend their turf and court mates, they use torpor to survive so-called “energy emergencies.” The researchers’ study determined this emergency state kicks in when their fat levels drop below five per cent of their body mass.

“These data help simplify this almost nebulous question of when hummingbirds use torpor; it's when they hit this emergency level of fat during the night,” Eberts says. “But the really interesting part was that the five-per-cent threshold essentially disappeared in late summer right before the migration period.”

The study found that when it’s time to migrate, the birds will enter torpor at high body-fat ratios, even up to 40 per cent. By eating more during the day and using torpor at night, the birds can better prepare for the journey south. Researchers have previously observed hummingbirds fattening up before migration, but whether it was due to torpor was unconfirmed.

“Hummingbirds can use torpor in different contexts to support their seasonal energy demands. It's this really versatile energy manipulation mechanism,” Eberts says. “We were also able to show that they can fatten up more if they use the torpor more.”

Eberts studied 16 male ruby-throated hummingbirds (female birds only rarely enter torpor during nesting to keep chicks warm) in the vivarium at the Advanced Facility for Avian Research at Western University with co-author Chris Guglielmo, a professor in Western's department of biology. Before the birds went to sleep, he used a QMR machine, which works like an MRI that generates numbers instead of images, to measure body fat. The birds were then placed in a respirometry chamber to measure oxygen use and how quickly they used their fat. A steep drop in metabolism and body temperature indicated they were entering torpor.

The study suggests that torpor is more than an emergency fail-safe – hummingbirds can use it to meet different energy needs.

"If evolution has solved this problem of dealing with energy emergencies in different animals, then maybe we can learn about flexibility in the rules for drastically shutting down metabolism," Welch says. "From the human-centered perspective, we'd love to be able to put astronauts into torpor for, say, their journey to Mars."

Eberts is now looking into the effect temperature has on the five-per-cent fat threshold hypothesis. He’s also examining whether ages and sexes of hummingbirds impact their use of torpor.

“There's somewhat of a debate on how common torpor is in birds in general, so considering the flexibility of torpor use is important for more broadly understanding the scope of torpor use in other animals,” he says.

The study was supported by the Natural Sciences and Engineering Research Council of Canada, Human Frontier Science Program, Canada Foundation for Innovation and Ontario Research Fund.

The Versatility of Torpor-use in Ruby-throated Hummingbirds from Deniz Kaya on Vimeo.