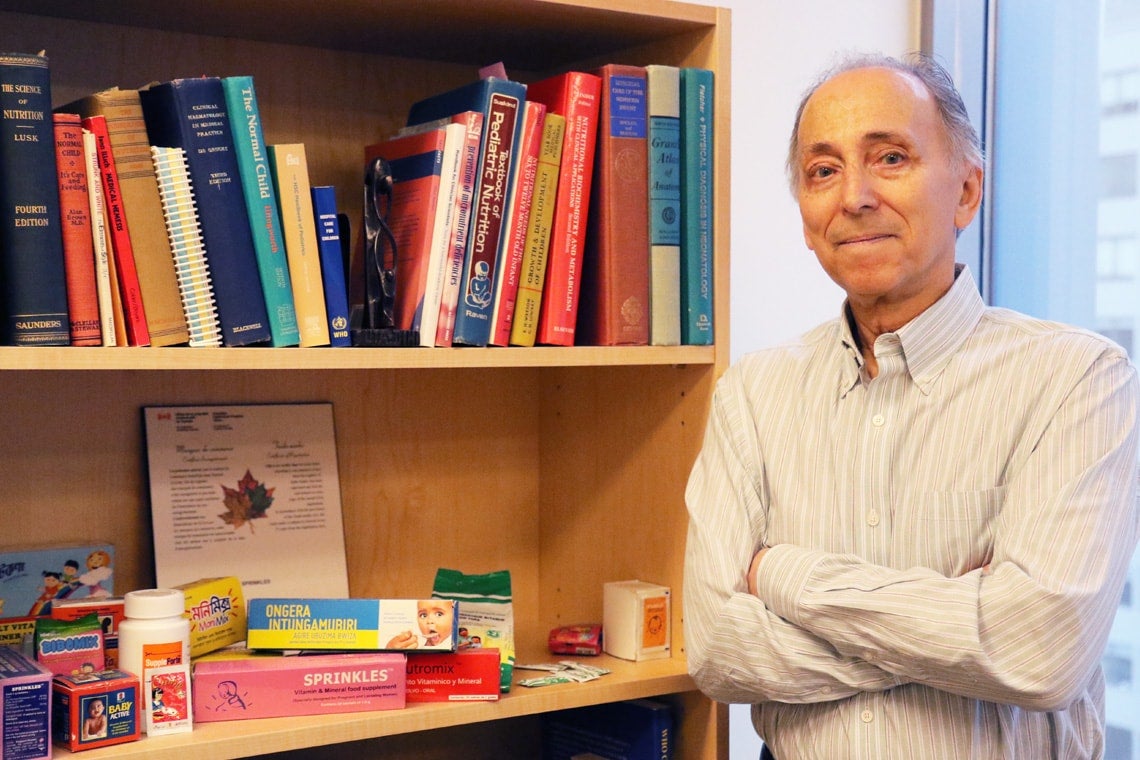 Millions of babies in the developing world are getting treated for malnutrition and anemia with a nutrient-packed powder sprinkled onto their food.

The pediatrician who developed “Sprinkles,” the fittingly named micronutrient powder, is Dr. Stanley Zlotkin, a professor at the University of Toronto and a clinical nutritionist at SickKids.

Zlotkin was first approached 20 years ago by UNICEF to try and figure out why global efforts to reduce iron deficiency in children were failing. An estimated 500 million children in the world suffer from anemia and iron deficiency.

Not only was he able to identify the problem – children and their parents didn’t like the taste or the stained teeth left by existing iron drops – but he went on to accept UNICEF’s challenge to produce an alternative.

Today, the micronutrient powder endorsed by the World Health Organization, is distributed by UNICEF, the World Food Program and UNHCR to an estimated 15 million children under the age of five, in 60 countries. In addition to Sprinkles, the powder goes by other names, including Vitalita, Bibomix, MixMe and Nutromix.

“They help address iron deficiency anemia and add vital nutrients to children’s diets to fuel the growth of their bodies and brains,” says Dr. Roland Kupka, UNICEF’s senior adviser on nutrition. “At UNICEF, we are grateful for Dr. Zlotkin’s leadership in developing this product, especially since it was UNICEF that requested him some 20 years ago to develop an effective approach to address iron deficiency anemia.”

UNICEF came to Zlotkin because of his unique credentials – he was a pediatrician and a researcher with a PhD in nutritional sciences. But the road to developing and distributing the powder to children who needed it would take a long time – nearly 10 years.

First, Zlotkin determined that fortifying food that parents made at home with rice, grains and lentils was the way to go. A powder that was tasteless and invisible, once added to a meal, would be more appealing to children and their parents.

He discovered that he could mask the taste of iron through a process called microencapsulation, and the product already existed on the market. Then came the packaging. Dining out one day, he noticed packets of salt and pepper and another light bulb went off.

“They would simply have to be told to open the package and sprinkle it onto whatever food they were using to feed their infant. It had to be packaged with the right amount, otherwise it could be toxic. And because it’s the developing world, it would have to be inexpensive and simple to use.”

But after he developed the powder, UNICEF came back with an even more challenging bar to cross. Not only would Zlotkin need to make sure it worked, he needed to run pilot tests in various countries to ensure that parents would use it, find companies in those countries that could package the powder cheaply at high volume, and then he needed to develop a distribution model.

Initially Zlotkin and his research team would mix up batches of the powdered iron, zinc, folic acid and various vitamins in the kitchen at SickKids, after hours. Later, as he began running pilot tests in various countries like India, Pakistan, Bangladesh, Ghana, Nigeria, Malaysia, Bolivia and Nicaragua, he met with manufacturers in those regions and showed them how to produce the powder in large volume.

Getting the money to start piloting the product was a hurdle.

“The challenge I had was finding funding for something no preliminary work was done on – I just had a good idea,” Zlotkin says.

USAID stepped in to initially launch a pilot in Nicaragua, then the U.S. Agency for International Development helped them start efforts in other countries like Ghana and India. The Heinz Foundation’s $500,000-a-year donation for five years, helped him scale up pilot projects in different parts of the world.

“I thought naively if I did one really great study, published in a good journal, we could go back to UNICEF and say it works, take it on. Not true. What we found out was that the ministries of health in countries around the world said our children are totally different from, say, the children in Ghana. Doesn’t matter if you did it in Ghana, you have to do the study in my country too.”

In the end, the powder would have pilot trials in ten different countries – Pakistan, India, Bangladesh, Indonesia, Malaysia, Ethiopia, Ghana, Mongolia, Bolivia and Guyana – all showing its success at treating anemia in children.

Eventually, an independent meta-analysis of the pilot tests and the powder’s success, and a distribution model developed by Zlotkin helped UNICEF give the green light. The endorsement from the World Health Organization (WHO) opened the product to other NGOs and the product becoming available in new markets.

“One of most important milestones in the development of micronutrient powders was the fact that WHO reviewed the literature on the prevention and treatment of mineral and vitamin deficiencies, including iron deficiencies because they realized there was nothing that was successful,” Zlotkin says. “They came out with a recommendation that if a country has mineral and vitamin deficiency or iron deficiency, they should use home fortification with micronutrient powders.”

Dr. Trevor Young, dean of U of T’s Faculty of Medicine, praised Zlotkin’s research for improving the lives of so many children around the world.

Zlotkin says he was in the right place at the right time, and the right person to develop the product.

“I was interested in minerals and vitamins, and I worked at an incredible university, an incredible hospital that has a great research institute where I was able to basically spend my time – and I could get paid a salary for this – doing research that had a clear value proposition associated with it. If I could get this right, it was going to improve the lives of lots of kids.”

For researchers like him, it’s the funding and opportunities that institutions provide that lead to great innovations.

Without significant research funding, Zlotkin says, he would not have been able to develop Sprinkles, and that’s why he’s such a strong supporter of the recommendations made by Canada’s Fundamental Science Review, which was led by U of T President Emeritus David Naylor. The recommendations have called for a $1.3-billion increase in federal research funding over the next four years.

And Canada has an even more important role when it comes to research that could impact the world and countries that may not be as prosperous as us, he says.

“Canada certainly as a wealthy, as a principled country of the world, has an obligation to continue and augment its funding for all kinds of basic, translational and population-based research,” he says.

"So, I strongly feel that Canada has an obligation to support research that will affect children in the developing world, as well as Canadian children.”