How the Canadian legal system fails Indigenous people like Colten Boushie: U of T expert 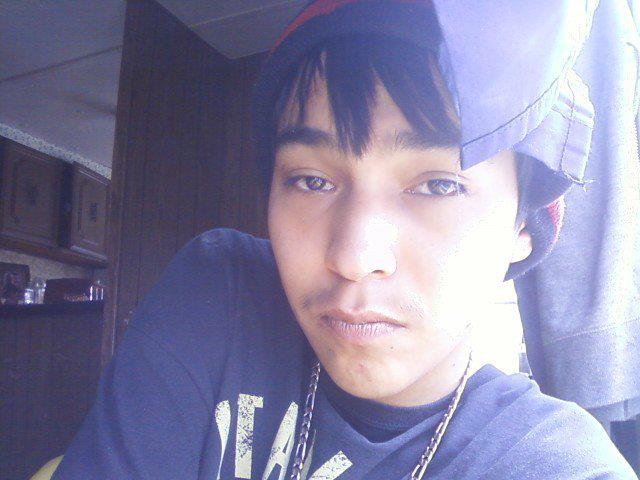 The verdict in the Colten Boushie case has provoked outrage across the country and prompted reflection about how the justice system treats Indigenous people.

After 15 hours of deliberation, the jury acquitted Gerald Stanley, a farmer, of second-degree murder in connection with the death of Boushie, a 22-year-old Cree man from the Red Pheasant First Nation.

Stanley shot Boushie at close range on Aug. 9, 2016, in what Stanley’s lawyers claimed was a freak accident.

After anger over Stanley’s acquittal spilled over into protests, and Boushie’s family went to Ottawa to advocate for legal reform, Prime Minister Justin Trudeau promised to “fix the system in the spirit of reconciliation.”

One problem that has often been highlighted is the under-representation of Indigenous people on juries.

Kent Roach, a professor of law and public policy in the University of Toronto’s Faculty of Law, says many Indigenous people are excluded from juries through peremptory challenges. During jury selection, lawyers on both sides are given a set number of peremptory challenges, which allows them to strike a prospective juror without providing a reason.

Roach says that in the Stanley trial, peremptory challenges were used to keep Indigenous people off the jury, and that the Crown never asked jurors whether they had a racial bias against Indigenous people.

The case, he told U of T News, “is just another in a long line of confirmations that to me it’s undeniable that our criminal justice system has horribly failed with respect to our treatment of Indigenous people.”

Over a long career in the law, Roach has won awards for his pro bono work and has represented Indigenous groups in interventions before the court, including in R. v. Gladue. 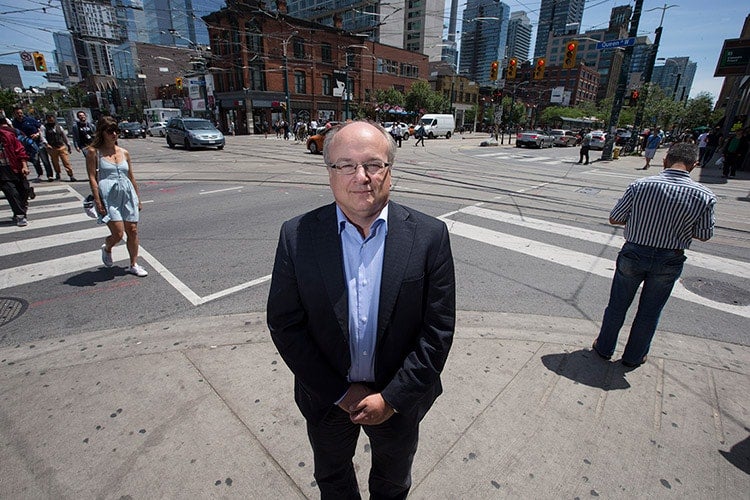 Kent Roach (above) is a professor of law at U of T. He has represented Indigenous groups in interventions before the court, including in R. v. Gladue, which advises that lower courts should consider an Indigenous offender’s background when making sentencing decisions (Bernard Weil/Toronto Star via Getty Images)

What was your reaction to the verdict?

Is it the accused or their lawyer who makes the challenge?

In this case it was Mr. Stanley and his lawyer. But peremptory challenges can also be used by the Crown.

There are basically two kinds of challenges to prospective jurors. One is the peremptory challenge – which is what was used here – where they simply say, “I don’t want this person on my jury” and they don’t have to give a reason.

The second is a challenge for cause, which is when they have to give reasons and get to cross-examine the prospective juror about why this person might not be impartial.

In this case, I think a troubling factor is the Crown didn’t ask the jurors who actually served on the jury whether racial bias against an Indigenous victim would prevent them from deciding the case impartially. That’s another reason that hasn’t been well picked up by the media as to why we might not have confidence in the jury.

The reason I focused on jury selection and wrote about it in the Globe and Mail is that once you have 12 people impaneled on a jury, under Canadian law, rightly or wrongly, you’re never going to know why they reached that decision. That's because it's an offense under our Criminal Code for jurors to disclose any of their deliberations. This is very different from the United States, where the O.J. [Simpson] jurors have gone on lots of television shows.

Read Roach's op-ed in the Globe and Mail

Is there a limit to how many peremptory challenges you can make?

That leads to another kind of problem. We know that about 200 people were summoned or actually arrived to serve on the Boushie jury. We don’t know how many of those were Indigenous, but all of the evidence points to Indigenous people being under-represented for various reasons among that 200. That’s a matter of provincial jurisdiction about getting the 200 prospective jurors into the room. Given that there is going to be under-representation of Indigenous people among prospective jurors, something like the peremptory challenge becomes even more pernicious because, as in this case, it appears like it was used to keep all the Indigenous people off the jury. 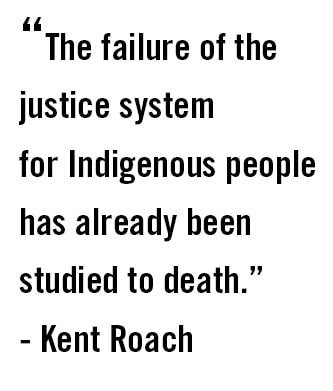 Many say this trial has highlighted systemic problems with the justice system and the way it treats Indigenous people. Are there other problems, in addition to the jury selection?

We've known about those systemic problems for an awful long time. I was involved with the Gladue (R v. Gladue) case in 1999 that said it was a crisis in our justice system the way we were failing Indigenous people. Before that, in 1998, I was involved in a case called Williams (R v. Williams) where the Supreme Court allowed an Indigenous accused to question jurors about whether they would be biased, whether they would have racial bias against the Indigenous accused.

In 1991 the Aboriginal Justice Inquiry of Manitoba found systemic failures and systemic discrimination and recommended that peremptory challenges be abolished. Unfortunately, Parliament – and this goes for governments both Conservative and Liberal – did absolutely nothing about that.

As I wrote in the Globe and Mail, reform has come too late in the Boushie case. But hopefully there will be some reform going forward. The easiest reform – I don’t think it’s a sufficient reform, and I want to make that clear – the easiest reform is simply to amend the Criminal Code to abolish peremptory challenges.

Peremptory challenges, as I write in the Globe, are really an invitation to discrimination.

Canada has its first Indigenous justice minister, Jody Wilson-Raybould. Prime Minister Trudeau is paying very close attention to this case as well. How hopeful are you that this is a turning point?

I’m a little worried because the minister of justice has said this requires study. Usually academics agree that we need to study something, but the failure of the justice system for Indigenous people has already been studied to death. We have the Manitoba Aboriginal Justice Inquiry recommending this in 1991. I’m a little worried that this will just result in comments of sympathy as opposed to concrete action. I think this is obviously going to play out, but as a person who has taught criminal law since 1989, I've seen the ability of Parliament to amend the Criminal Code quickly when they get serious about an issue.

And so if we haven’t seen an amendment by the time Parliament dissolves for the summer, I think it's fair to say I'll be pretty disappointed.

What kind of challenge does this verdict pose to reconciliation in general?

It’s a huge challenge. You have to remember that Indigenous people reasonably feel like they’re getting it both ways. The Supreme Court has said the fact that more than a quarter of our prisoners are Indigenous is a crisis in the justice system, so then when the same criminal justice system appears to fail either the missing Indigenous women and girls or, many people would say, Colten Boushie, then it’s kind of a ground for despair.

I don’t think the reform I’m recommending, which is a fairly simple lawyer's sort of reform – I don’t think that's going to achieve reconciliation. I think we need to approach these things on a nation-to-nation basis.

Obviously, that’s something that’s going to have to be done on a case-by-case, community-by-community, nation-by-nation basis. This is just another in a long line of confirmations that, to me, it's undeniable that our criminal justice system has horribly failed with respect to our treatment of Indigenous people.

Why did the prosecution seek a second-degree murder charge, and why couldn’t the jury compromise on a lesser charge?

The compromise charge was there. The jury was instructed that if the accused was not guilty of murder that they should consider whether he was guilty of manslaughter. I was very surprised that the jury did not come in with at least a manslaughter verdict. And that’s because the defence that Mr. Stanley mounted is a defence of accident, and the way it works in Canadian law is that if you believe that the discharge was accidental, then that means there’s at least a reasonable doubt that he didn't have the intent to kill.

So therefore you get an acquittal on murder, but the way it works is we have an extremely broad manslaughter offense in Canada. And it applies whenever someone is doing an unlawful act like careless use of a firearm, which seems to have been present here, pointing a gun at a person’s head.

As an academic lawyer, the vast majority of cases that I see where there’s a defence of accident raised to murder results in a manslaughter conviction. Of course, if there had been a manslaughter conviction, rightly or wrong, Mr. Stanley would have, subject to a successful appeal, been looking at at least four years in jail because of our mandatory minimum sentences.

I don’t know whether communities in Saskatchewan were expecting a murder conviction, but personally I was surprised that the jury did not come back with a manslaughter conviction.

There’s been a big reaction to this verdict, but are we asking the right questions?

I think this is an awakening, but I’m a little bit concerned, like so much these days, it’s becoming a polarized sort of debate. In a way, that might actually not deal with either the immediate problems we have with juries or the much larger problem we have with the justice system.

What are the chances the verdict will be appealed?

Appeals by the Crown are only available for errors of law – not on more general or fact-specific grounds of miscarriage of justice or unreasonable verdict.

It’s hard to say what the chances are that an appeal would be successful without seeing the trial or a full transcript of its proceedings.