'A higher level of spiritual consciousness': U of T at the Parliament of the World's Religions 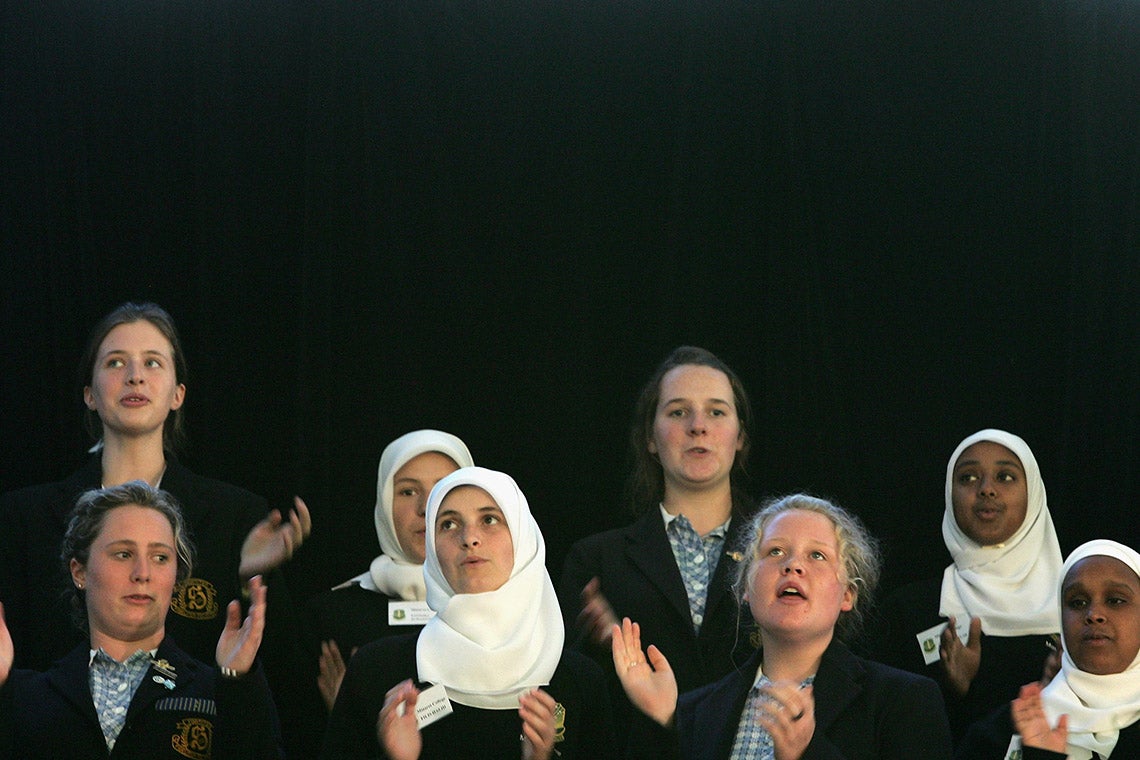 A local school choir made up of different faiths and cultures sing during the 2009 Parliament of the World's Religions, in Melbourne, Australia. Toronto is hosting the event beginning Thursday (photo by Robert Cianflone/Getty Images)

At a time when global society seems to be more divided than ever, more than 10,000 people of some 200 faiths are expected to come together at the Metro Convention Centre starting tomorrow for the Parliament of the World’s Religions. And U of T will be very much a part of the proceedings.

The forum was first held in 1893 in Chicago, but wasn’t held again for another 100 years. Since 1993, it has been held in Chicago, Cape Town, Barcelona, Melbourne and Salt Lake City. Past speakers have included global leaders such as Nelson Mandela and the Dalai Lama.

Speakers at the Toronto edition, which ends Nov. 7, will include author and U of T alumna Margaret Atwood, soldier, senator and advocate Romeo Dallaire and global health pioneer James Orbinski, who is a professor at the Dalla Lana School of Public Health. The programs in the seven-day symposium will be presented under the theme “The Promise of Inclusion, the Power of Love: Pursuing Global Understanding, Reconciliation and Change.”

U of T alumna Kahontakwas Diane Longboat is co-chair of the parliament’s Indigenous program, “The Spiritual Evolution of Humanity and Healing Our Mother Earth.” She believes the parliament will address the need for global connectedness.

“Religion can divide people when you look at it simply in a book or a building,” says Longboat, who earned three degrees from U of T and founded the university’s First Nations House. “When you look at the various faith traditions that are going to be represented at the parliament, if you rise to a higher level of spiritual consciousness and really understand the teachings of your faith tradition, you can look out at an audience of 10,000 people and say, ‘Look at all the flowers in the Creator’s garden, how rich we are as a human family that we have all this beauty in front of us and we are here together.’”

Longboat also feels that bringing together faith groups at the parliament will have a specific benefit for Toronto.

“The primary benefit of having the 2018 parliament in Toronto is to reinforce relationships among diverse faith groups and to promote friendship, peacemaking, a deeper understanding of who we are as different parts of the human family and how we can look at each other and value the richness we can each bring to the table when we do our work in this city,” says Longboat, who has worked at the Centre for Mental Health and Addiction as Traditional Healer, creating ceremony grounds where traditional healing is now part of the standard of care for First Nations, Métis and Inuit clients and patients.

The parliament will include 500 programs and events across six major tracks focused on such topics as the dignity of women in faith traditions, countering war, and taking action on climate change.

Longboat believes the Indigenous program enables Indigenous Peoples from around the world to “have a platform to share the very best part of their individual knowledge systems and bring to bear prophesies, values and actions that can address the major issues that are affecting humanity today. We need to have a rise in spiritual consciousness, not the divisive hatred and racial tension that we have now.”

Longboat adds that the Indigenous program can speak directly to an increasingly endangered natural world: “All parts of the human family have the capacity to speak that language of the spirit to the natural world but not all of them remember that language. And that’s our gift to the world – that we remember the language and we can re-teach it to other folks so they can become strong again as well in their relationship with the natural world.”

She believes that “the language of the spirit enables you to speak to the winds, the water, the various parts of animal life, the fish, the bird life. And when you can talk to them as relatives, you are not going to destroy their habitats, pollute the air, rape the land and take more than you need and poison it with chemicals. That’s the language of the spirit."

The Indigenous program will begin Thursday at 3 p.m. in Olympic Park, just south of the Metro Toronto Convention Centre. These opening ceremonies are being sponsored by U of T’s University of St. Michael’s College. Longboat says fire keepers will light a fire to open the ceremony, which will also include a grand entry of Indigenous dancers into the convention centre, followed by a number of Indigenous speakers and traditional Indigenous activities.

“St. Michael’s has funded all of that,” she says. “I can’t say enough how grateful we are to St. Michael’s and the University of Toronto because they have elevated the presence of Indigenous people to the world.“

“We were very pleased to support the Indigenous program of the Parliament of the World’s Religions,” says Reid Locklin, associate professor, Christianity and Culture at St. Michael’s and a faculty member in U of T’s department for the study of religion. “Our support is due to St. Michael’s’ longstanding commitment to interreligious dialogue, supported for the past decade by the Richard Alway Interfaith Symposium Fund, and our commitment to advancing the work of the Truth and Reconciliation Commission of Canada.”

U of T’s Amos Key Jr., assistant professor at the Centre for Indigenous Studies and the department of linguistics, will be bringing some of his students to the opening ceremonies.

“It’s important that Indigenous people are able to welcome others from around the world to this part of Ontario,” says Key. “People need to know that not all of us were converted to Christianity and we want to celebrate so that people from other faiths can hear the philosophies of our spirituality.“

Two prominent spiritual leaders will also give lectures at events related to the parliament on U of T’s downtown campus: