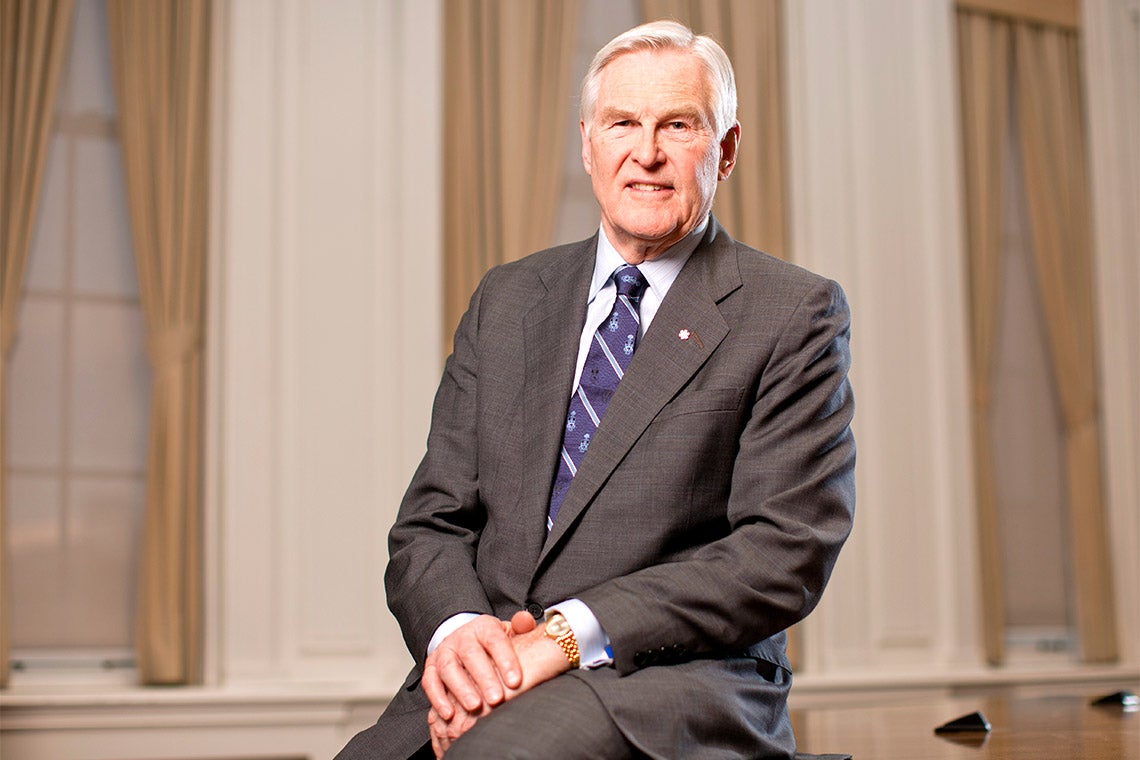 Michael Wilson’s leadership in business and politics, advocacy for mental health awareness and compassion as a colleague and friend are being remembered today by everyone from prime ministers to members of the University of Toronto community.

Here are some of the messages and memories shared online: “Michael Wilson’s dedicated service to Canadians – including his important work as Minister, Ambassador, and passionate advocate for mental health – will leave a lasting impact on our country. We’ve lost a truly great Canadian. My condolences to his family and friends.”
- Prime Minister Justin Trudeau

“This is a sad day. Michael Wilson served Canada with exceptional skill and dedication. From the Cabinet table to serving our country with dignity and wisdom as Ambassador in Washington, Mike embodied the best of public service. Laureen and I extend our heartfelt condolences.”
- Stephen Harper “I think Canada has just suffered a major loss. Michael Wilson was an outstanding minister of finance, a highly admired ambassador to the United States, and a principled and visionary leader in the field of research into mental health in Canada – and also in education, with his role as chancellor of the University of Toronto.”
- Brian Mulroney to U of T News

“Michael Wilson was one of Canada’s most able, upright, accomplished, highly principled and inspirational citizens, in public life and private example. I mourn and regret his death and celebrate his friendship and his life.”
- Joe Clark

On CBC News, Paul Martin said that Wilson was a “tremendous finance minister," and that "he took mental health out of the shadows and he took it into the mainstream and he did it with huge compassion.”

“Michael Wilson talked about his son’s suicide at a time when very few, especially at his stature, talked about suicide. He became a powerful advocate for ending stigma around mental illness. A great legacy.”
- Matt Galloway, host of CBC's Metro Morning

“Very saddened by the passing of @UofT Chancellor Emeritus Michael Wilson – a remarkable person and a champion for mental health. He leaves behind an incredible legacy at #UofT & beyond.”
- Dean of the Faculty of Medicine, Trevor Young

'A truly nice person in a world that often wasn’t'

​“Michael Wilson was one of the most intelligent, decent people I have ever met, inside or outside of politics and public life… if it's possible he may have contributed even more in his life after politics when he became a pioneer in raising awareness of mental illness and for his incredible contributions to post secondary education through the University of Toronto. Michael Wilson was a gentle,  considerate giant in business, in public life, as a diplomat in Washington, & in our community. He will be sadly missed & on behalf of the people of the City of Toronto, I express sincere condolences to his wife Margie & the entire Wilson family.”
- Toronto Mayor John Tory

“We have lost an outstanding Canadian today with the passing of Michael Wilson. Former Minister, Ambassador to the [U.S.], Companion of the Order of Canada, and tireless mental health advocate, Mr Wilson will be missed by many. Sincere condolences to his family, friends & colleagues.”
- Julie Payette, Canada’s governor general “My thoughts are with the family and loved ones of Michael Wilson. Michael was a distinguished MP, Minister and diplomat, who negotiated the first NAFTA. More recently, he did outstanding work as a tireless mental health advocate and Chancellor of @UofT.”
- Chrystia Freeland, Canada’s minister of foreign affairs

“Michael Wilson was not only an incredibly dedicated politician, he was also an exemplary and tireless advocate for mental health. My sincere condolences to his family and friends. "We need to shore up the belief that sickness isn't weakness."
- Catherine McKenna, Canada’s minister of environment and climate change

“Sad to learn that the ranks of U.S.-Canada ambassadors lost a beloved member yesterday. Michael Wilson was a tireless champion for Canada and will be remembered as one who strove to bring our two countries ever closer together. My deepest condolences to his family and loved ones.”
- U.S. Ambassador to Canada Kelly Craft

“Michael Wilson will be remembered for his countless contributions to Canada. An incredibly capable Minister and former Ambassador, he will also be remembered for his groundbreaking work bringing mental health out of the shadows. My deepest condolences to his wife and family.”
- Ontario Premier Doug Ford

“I covered Michael Wilson’s first nomination meeting back in the late 1970s.  The attention was on him because he was Joe Clark’s ‘star candidate’ for the next election. He was nervous but you could tell he was special. A truly nice person in a world that often wasn’t.”
- Peter Mansbridge