Good for you, better for the planet: U of T cyclists pedal toward a more sustainable future 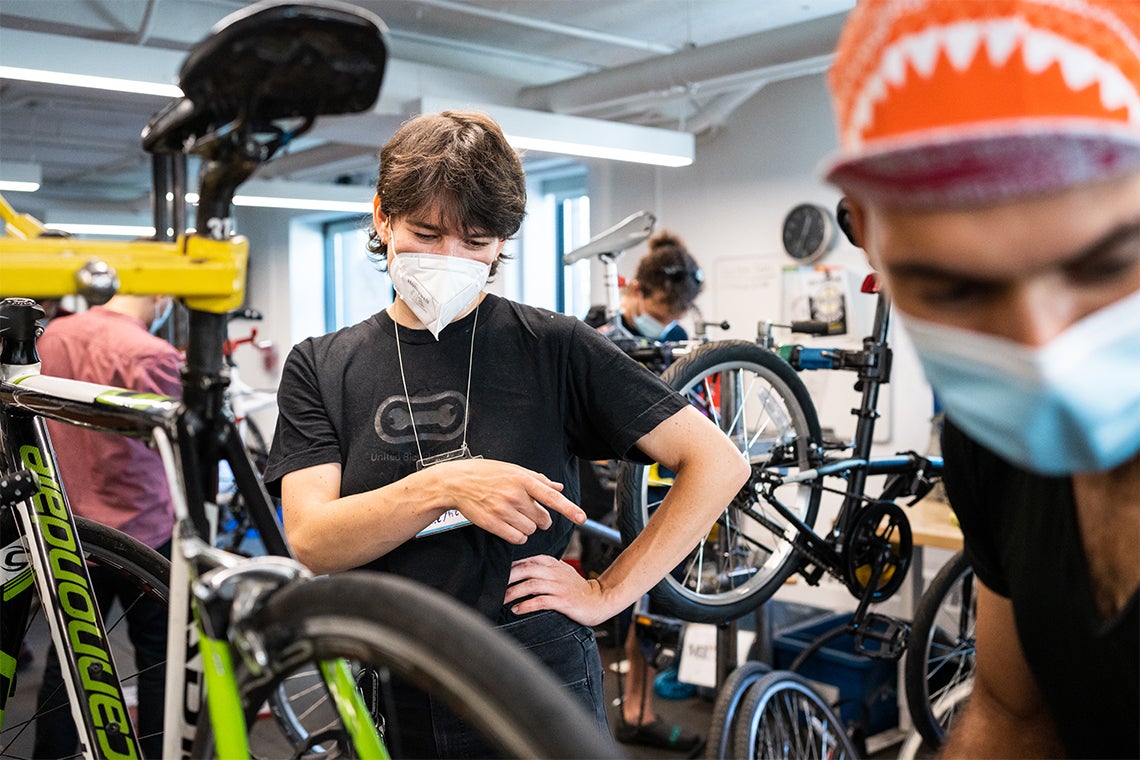 One of Ayush Sharma’s first stops upon moving to Canada to attend the University of Toronto was Bikechain on the George campus.

An international student from Delhi, Sharma says he had barely been in Toronto a week before visiting the educational bike repair space for students.

“I enjoyed cycling back home in India and I wasn’t sure how to go about doing it in Toronto,” says Sharma, who is completing a major in biodiversity and conservation biology and a minor in geographic information systems. “It’s a big city and it seems a little intimidating – and bikes are expensive.

“I wasn’t really sure where to start.”

Bikechain proved to be a great landing pad. The non-profit organization, which has been around since 2005, not only offers free workshops on how to fix a flat tire, do-it-yourself bike repairs and free bike rentals to students – it’s part of a supportive and growing local cycling community in and around campus.

“People come here on a basic level to fix their bike,” says Beth Austerberry, executive director of Bikechain. “A lot of people also come here because they want to learn.” 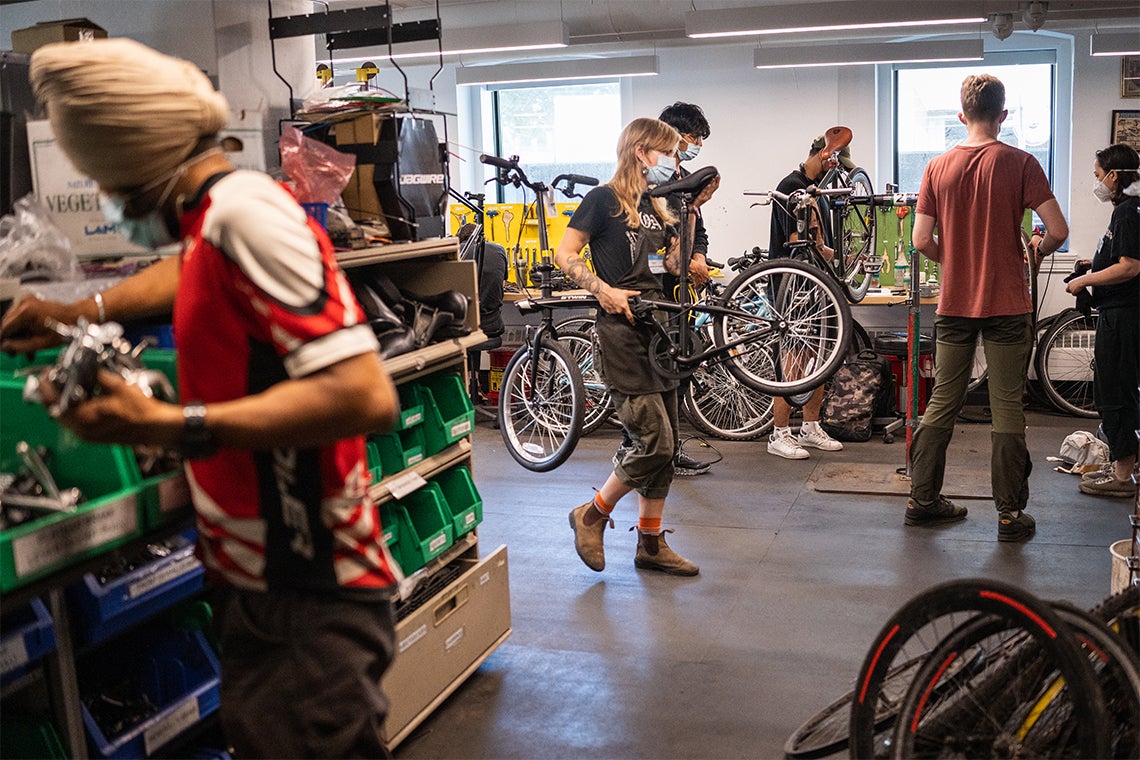 Bikechain is a non-profit on the St. George campus that offers free workshops on how to fix a flat tire, do-it-yourself bike repairs and free bike rentals to students (photo by Geoffrey Vendeville)

While Toronto is often criticized for its car-focused infrastructure, there’s no denying the rapidly growing popularity of cycling as a healthy, sustainable mode of transportation – a future that U of T is actively supporting through research, infrastructure and community building efforts.

On the St. George campus alone, there are 36 Bike Share Toronto stations – part of a larger, city-wide network of 680 stations and 7,185 rental bikes (U of T Scarborough also has a Bike Share station near the bus loop on Military Trail). There are also bike lanes that run through the campus along University Avenue, College Street, St. George Street, Wellesley Street, Bloor Street, Hoskin Avenue and Harbord Street, among others.

U of T is also adding hundreds of new above-ground and below-ground spaces to park your bike as part of as part of the Landmark Project, which will transform the historic heart of the St. George campus into a greener, more pedestrian friendly space on top of a massive underground geoexchange system that will significantly reduce campus emissions.

At U of T Scarborough, cycling admittedly requires a bit more planning than it does on the St. George campus – but there are enviable upsides, too.

Hanno Rein, an associate professor in the department of physical and environmental sciences at U of T Scarborough, says he discovered a particularly scenic cycling route to campus that he felt compelled to share via a blog post.

“The nice thing about it is that there are no cars around, so the entire trip is all trails,” he says. “I wanted to encourage others to commute by bike, even if it is in Scarborough.”

Rein, who also teaches in the David A. Dunlap department of astronomy and astrophysics and the department of physics on the St. George campus, says he loves cycling because of the environmental and health factors.

“It’s very enjoyable,” he said. “It’s the nicest commute I can think of.”

However, he’s also quick to point out that infrastructure for cyclists could be better and safer. 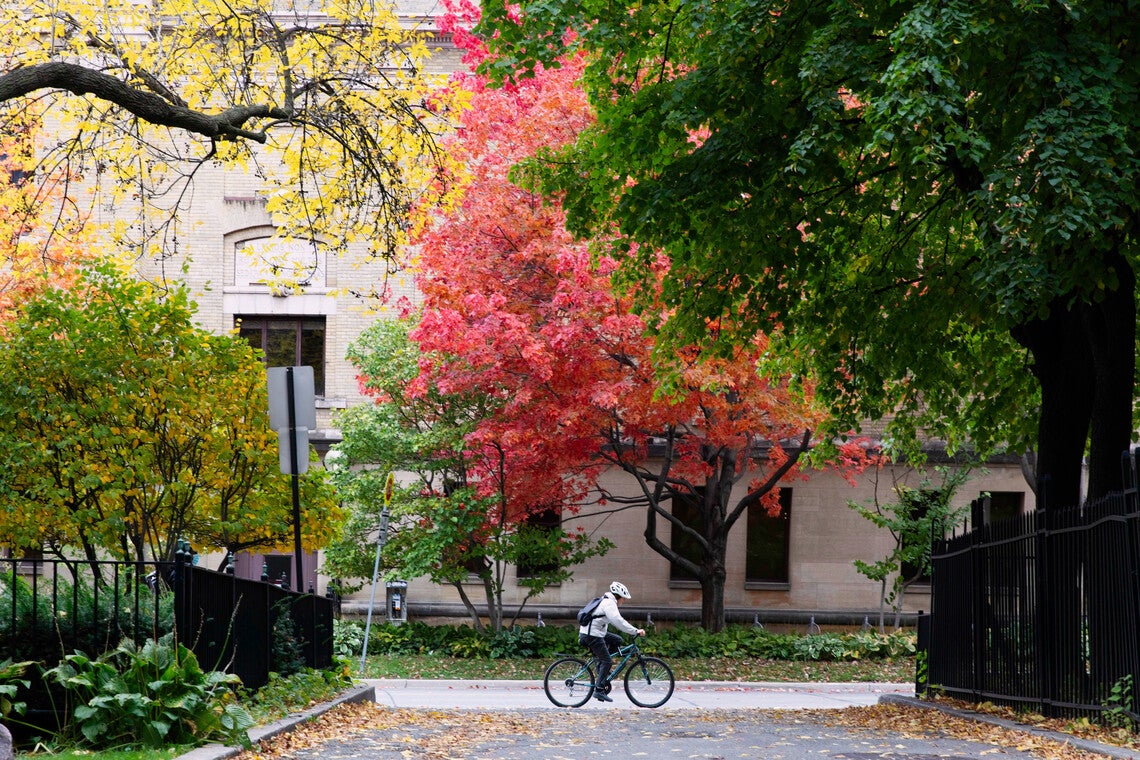 Many U of T students, staff, faculty and librarians treat cycling as a year-round activity in Toronto (photo by Daria Perevezentsev)

At U of T Mississauga, BikeShare offers 48-hour bicycle, helmet and lock rentals to U of T Mississauga students free of charge. Located in the Student Centre extension, BikeShare has commuter-style bikes and mountain bikes for rent and is open until the end of October. The program also offers educational repairs similar to Bikechain, providing tools for basic fixups.

Cyclists at U of T Mississauga also have access to the 3.4-kilometre Nature Trail Loop along Credit River and nearby Erindale Park offers a scenic route for cyclists and mountain bikers in the area. Meanwhile, the City of Mississauga is considering the implementing a system similar to Bike Share Toronto to expand transportation options. The system would include stations with bikes, e-bikes and e-scooters.

Southern Ontario’s snowy winters can pose a challenge to bicycle commuters on all three campuses – though many are increasingly treating it as a year-round activity. 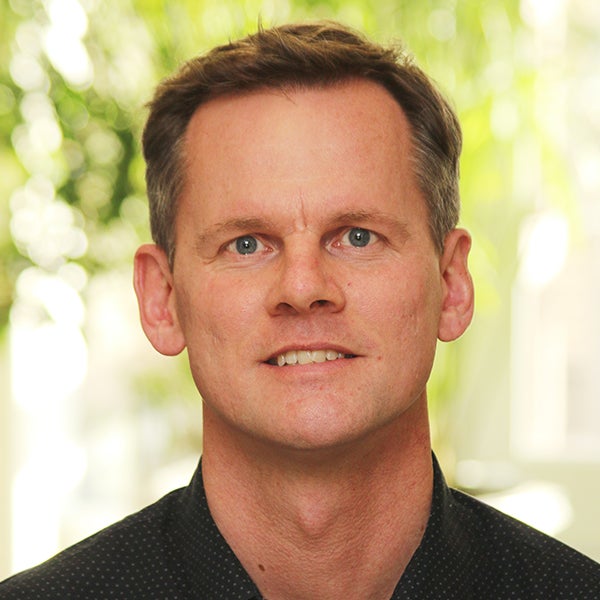 Tony Harris, a professor in the department of cell and systems biology in the Faculty of Arts & Science, says he appreciates being available to avoid traffic on his commute and likes that he’s reducing his environmental footprint by not driving.

His approach to slush and snow?

“I think it’s really important to find good routes that are safe,” he says, adding that it takes him about 30 minutes to bike to the St. George campus from his home. “In the winter, you have to be more cautious about slippery conditions.”

A long-time cycling commuter, Harris adds that he’s perfected the art of cycling during a Toronto winter.

“I wear my normal clothes and then my fleece and I have a yellow cycling jacket on top,” he described. “I wear two pairs of gloves and that really helps my hands. I have an inner glove that’s a running-type glove and then I wear a fleece glove over top. I also wear a toque underneath my helmet. “One other thing is long underwear.

“Having two layers everywhere seems to be the key.”

His advice to students who are new to cycling? Map out your routes.

U of T researchers are also playing a key role in helping to map out the university’s transportation future with sustainability – and cycling – in mind. Marianne Hatzopoulou, a professor in the department of civil and mineral engineering in the Faculty of Arts & Science, belongs to a research team that’s trying to understand how U of T commuters’ habits and other personal choices contribute to greenhouse gas emissions.

The project, funded by the Climate Positive Energy research initiative, will launch a travel survey in January to collect data from students, staff, faculty, and librarians to understand how they commute to campus every day.

“The second part of the project is to quantify the carbon footprint of commuting and the greenhouse gasses associated with commuting to U of T to measure what our footprint is from transportation,” explained Hatzopoulou.

“The third element is to run some experiments to understand what would make people switch their mode of transportation, especially those who are driving.”

Hatzopoulou’s team wants to understand where there are opportunities to promote more sustainable and active modes of transportation and where the challenges lie.

“There’s a lot of research out there that actually quantifies the benefits of cycling as a mode of transportation,” she says.

As for Sharma, riding his bike around campus not only introduced him to the city, it saved him precious time traveling between classes on the St. George campus – not to mention lowering his carbon footprint.

Most importantly, he says, it has helped him find a community through Bikechain, where he is now a co-president and runs workshops.

“There is a mix of undergraduate, graduate, PhD students as well as faculty and non-U of T students,” he says of the group. “Bike shops in general can be dominated by cis males and it can be an unwelcoming space for other people, but Bikchain has always been an inclusive and open space for everyone.

“That’s one of the main reasons I’ve stuck with the community for so long.”