'Give back': At his final convocation, Chancellor Michael Wilson shares a fitting message 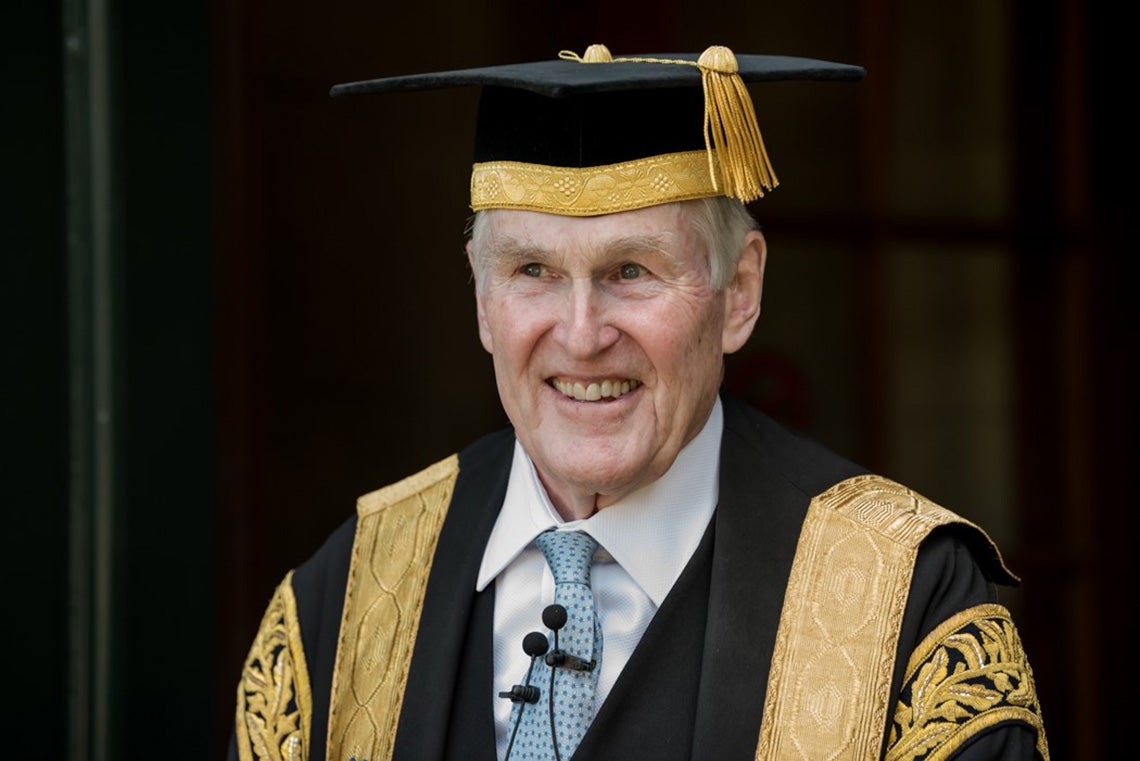 Chancellor Michael Wilson "has never missed an opportunity to promote a greater appreciation of U of T’s unique academic mission among leaders in business and civil society,” said U of T President Meric Gertler (photo by Steve Frost)

University of Toronto Chancellor Michael Wilson’s final convocation ceremony began, as it has many dozens of times before, with his official proclamations – in English and Latin – and ended with a surprise, student-led musical tribute.

In between, the outgoing chancellor smiled, chatted and shook the hands of 238 Rotman Commerce graduates as they walked across the stage – but not before encouraging them to add volunteer service to their career aspirations.

“Whether it’s in a service club, hospital, children’s sports, charitable organizations helping those in need, there are many ways to give back to our communities, strengthening them as well as ourselves,” said Wilson, who, wearing his black and gold robe and mortar board, was also the ceremony’s convocation speaker.

“It’s also a way of gratefully acknowledging the benefits of the good education you’ve received here at the University of Toronto.”

It was a fitting message from U of T’s 33rd chancellor, who was first elected for a three-year term in 2012 and renewed for a second term of equal length in 2015 – the maximum allowed by the University of Toronto Act. Though Wilson is best known for his accomplished career in the private and public sector – including as Canada’s minister of finance and ambassador to the United States – his most lasting impact may well be through his work with numerous professional and community organizations.

Wilson’s contribution to mental health awareness has been particularly noteworthy. During his convocation speech, he recalled a time when mental illness was a “hidden subject” no one talked about, “so that’s where I decided I should volunteer.” He later doubled his efforts after his son, Cameron, took his own life after struggling with depression.

In 2015, he was appointed chair of the Mental Health Commission of Canada.

“His goal is simple: to make mental illness just like any other type of human pain and suffering,” Paul Garfinkel, a professor emeritus in U of T’s department of psychiatry and a staff psychiatrist at the Centre for Addiction and Mental Health, said during a May tribute event for Wilson held at Hart House.

“And by speaking out, he’s changed the whole culture around it.” That’s not to say Wilson’s leadership in other areas hasn’t been impressive. A Trinity College alumnus, Wilson graduated from U of T in 1959 with a commerce degree and immediately set off to pursue a career in finance – ironically, he didn’t attend his own convocation ceremony – and later made his way into the public sphere.

He was elected to Parliament in the late 1970s and was appointed Canada’s minister of finance in 1984. He also held ministerial positions in industry, science and technology, as well as international trade. That put him in the middle of Canada’s NAFTA negotiations and made him a frequent representative to the G7, International Monetary Fund, World Bank and other international bodies.

“Personally, I believe that if political currents had flowed in a slightly different direction that Michael would have become prime minister of Canada,” Roy McMurtry, a former Ontario attorney general and chief justice, told the crowd at the Hart House event.

McMurtry said that he’s known Wilson for more than 60 years, adding that “apart from his many obvious talents, Michael is also one of the most thoroughly decent people I’ve ever known.”

Wilson, who is currently the chair of Barclays Capital, also served as Canada’s 22nd ambassador to the United States from 2006 to 2009.

Tiff Macklem, a former senior deputy governor of the Bank of Canada and the current dean of U of T’s Rotman School of Management, said everyone who attended the tribute had likely experienced a “Michael moment.” In Macklem’s case, the moment came when he was working for the federal department of finance and was advising Prime Minister Stephen Harper’s government on Canada’s response to the 2008 financial crisis.

“I can’t tell you how fortunate we were in Canada to have a former investment banker, former minister of finance and a man of impeccable integrity and one of the most respected figures in international finance as our ambassador to the United States at one of the most pivotal moments in our financial history since the Great Depression,” Macklem said.

“Canadians need to know Michael Wilson’s influence was enormous when it mattered most – and that’s exactly what he’s brought to the University of Toronto.” “Apart from his many obvious talents, Michael is also one of the most thoroughly decent people I’ve ever known,” said Tiff Macklem of Wilson (photo by Steve Frost)

Indeed, as chancellor, Wilson’s contributions to U of T have been immeasurable. He presided over scores of convocations and conferred university degrees on tens of thousands of graduates. He also acted as ambassador to more than a half million alumni and, behind closed doors, worked tirelessly to promote U of T’s interests in Canada and beyond.

“He has never missed an opportunity to promote a greater appreciation of U of T’s unique academic mission among leaders in business and civil society,” said U of T President Meric Gertler, who announced a learning abroad scholarship in Wilson’s honour at the Hart House tribute.

President Gertler also highlighted Wilson’s uncanny ability to connect with all those thousands of graduating students who have crossed the stage at Convocation Hall over the years.

“He interacts with every student as an individual and, through a genuine word of advice or encouragement, he leaves them with a sense that the university is proud of them and excited for their future,” Gertler said.

Similarly, Jane Pepino, vice-chair of U of T’s Governing Council, said seeing Wilson perform his duties during convocation season was an inspiration.

“I’ve been honoured to sit on the platform from time to time, and every single person gets a handshake, a look in the eye and something like: ‘What’s next for you?’” she said.

“Somehow that person is cherished, honoured and has this warm experience in under eight seconds. It’s a marvel to watch.”

During the final minutes of his last ceremony as U of T chancellor, Wilson was serenaded by a dozen U of T music students and alumni who performed a medley of pop songs. They included Drake’s “Hotline Bling,” complete with Wilson-specific lyrics such as “negotiation was my specialty, at the NAFTA table I’d get them all to agree.”

A little over one month earlier, at the Hart House tribute, President Gertler similarly expressed his heartfelt gratitude to Wilson, albeit in considerably more measured fashion.

He said, simply: “On behalf of the university, I thank you for your exemplary service.” Michael Wilson's family – his wife Margie and son Geoff – attended May's event at Hart House, a tribute to the U of T chancellor. (photo by Lisa Sakulensky) Wilson greeted guests at the May tribute, including leaders from U of T such as Bruce Kidd (left), vice-president of U of T and principal of U of T Scarborough (photo by Lisa Sakulensky)