A gathering of minds: Maanjiwe nendamowinan officially opens at U of T Mississauga 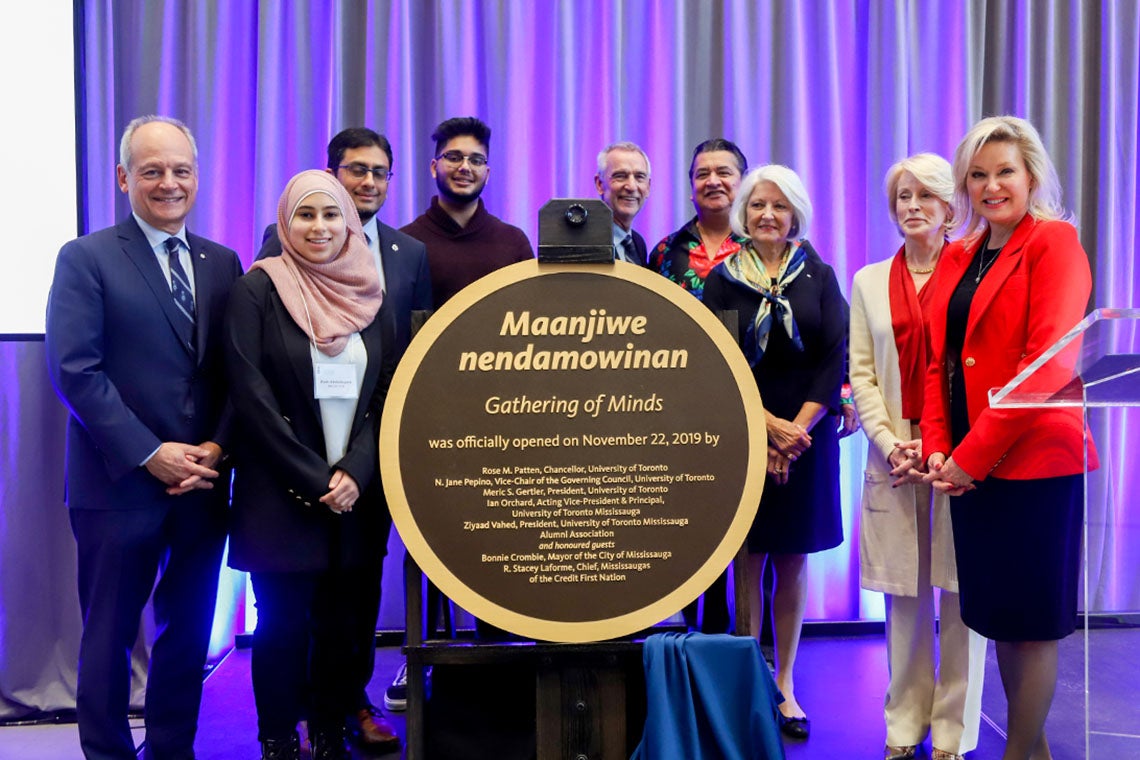 The University of Toronto Mississauga officially opened Maanjiwe nendamowinan on Friday, the final phase of the redevelopment of the former North Building.

Maanjiwe nendamowinan is an Anishinaabemowin phrase meaning “gathering of minds.” The name was chosen after a university committee unanimously recommended an Indigenous name be considered. The Mississaugas of the Credit First Nation, on whose traditional territory the campus now stands, provided the name.

“We are pleased we could acknowledge the Mississaugas of the Credit First Nation with the naming of this building and demonstrate our commitment to engaging with Indigenous communities as we work together to lead the process of reconciliation,” U of T president Meric Gertler said at a ceremony attended by Misssissauga Mayor Bonnie Crombie and Chief R. Stacey Laforme of the Mississaugas of the Credit First Nation.

The new six-storey structure is home to the humanities and social sciences departments and includes almost 40,000 square feet of new classroom space. The building boasts cutting-edge technology designed to facilitate collaboration, more than 500 study spaces to accommodate individual and group work, a space for digital humanities research and a large, open atrium that doubles as an event space.

“Our newest building has not only been designed with the needs of today’s students, faculty and staff in mind, it also represents our commitment to building a sustainable future on campus,” said Ian Orchard, acting vice-president and principal of U of T Mississauga.

“These environmental innovations are in keeping with our pledge to cut greenhouse gas emissions and work toward becoming a net-zero institution.”

The building sits on the site of the former North Building, which was the first building on campus, and houses the departments of English and drama, philosophy, historical studies, language studies, political science and sociology, the Robert Gillespie Academic Skills Centre and the Centre for South Asian Civilizations.

Maanjiwe nendamowinan was designed by Perkins and Will, and was built by Stuart Olson Inc.