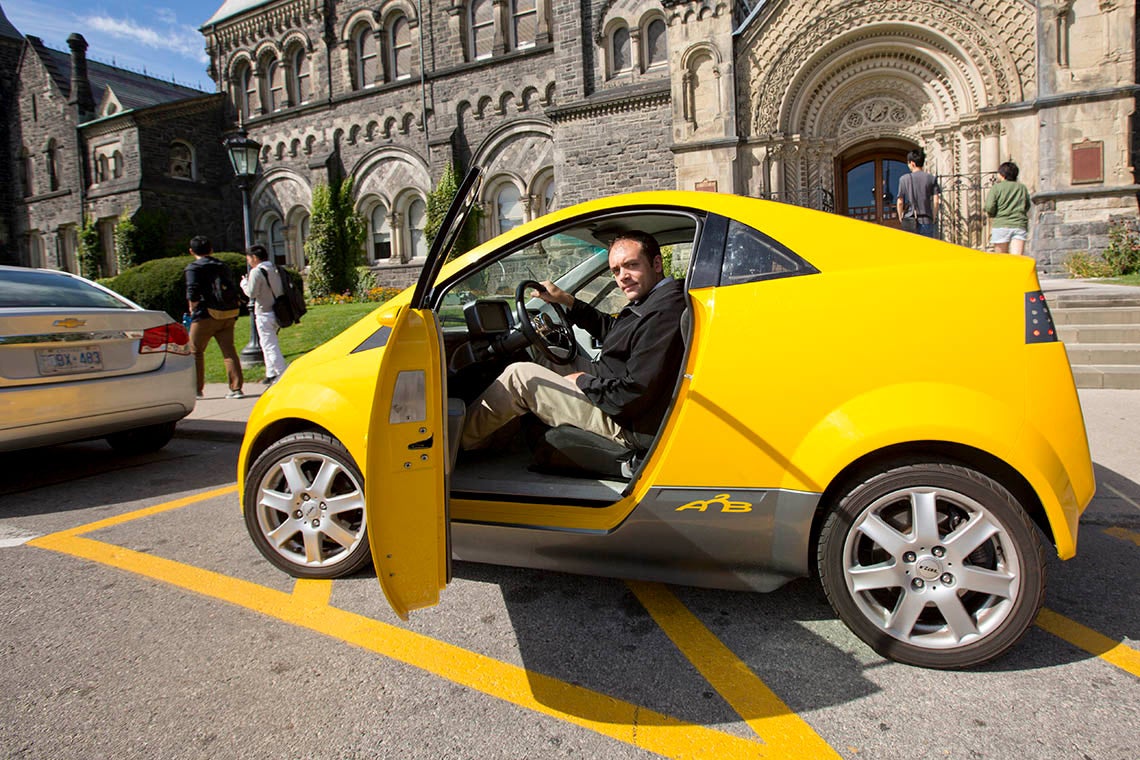 Olivier Trescases, the director of the U of T Electric Vehicle Research Centre, says one of U of T's core strengths is its ability to bring together researchers from different disciplines to work on major projects (photo by Johnny Guatto)

From auto parts made of bio-foams to green chemicals and more efficient battery systems for electric vehicles, University of Toronto researchers are leading the way in devising new manufacturing technologies that could revolutionize any number of Ontario industries.

One of those researchers is Ning Yan, a professor in U of T’s Faculty of Forestry and the department of chemical engineering and applied chemistry. Her team has been working with an automotive startup to develop bio-foams that could potentially replace plastic components in the automotive parts industry – a sector that’s long been vital to Ontario’s economy.

On May 28, Yan and other researchers will have the opportunity to discuss their work with provincial legislators as part of a public policy discussion at Queen’s Park. The event, hosted by the Council of Ontario Universities, will focus on how universities are working with employers to keep Ontario’s advanced manufacturing sector competitive.

“Advanced manufacturing is crucial to future-proofing Ontario’s economy and ensuring that our province remains ahead of the curve when it comes to implementing innovative technologies and processes and creating new jobs,” said Vivek Goel, U of T’s vice-president of research and innovation.

“U of T’s world-class research in various facets of advanced technologies has a key role to play, and dialogue between our experts and policy-makers is crucial to ensuring that Ontario’s advanced manufacturing sector thrives now and in the future.”

The Ontario manufacturing sector accounts for 18 per cent of the province’s economy, generating $270 billion in annual sales, and employs over 12 per cent of its workforce. In 2018, the federal government named advanced manufacturing in Ontario one of five innovation superclusters – collections of companies, research institutions and innovation partners – as part of a strategy to invest in industries where Canada has an opportunity to be a world leader.

Yan, who specializes in developing green chemicals, bio-based composites and other products from renewable forestry resources, plans to show off product samples at the Queen’s Park event.

“We’ll bring some bio-adhesives and bio-resins which were synthetized using materials from forest residue and biomolecules from forests,” she said, adding that she wants to demonstrate that making green products is possible through advanced manufacturing in Ontario – and that undertaking a more sustainable approach can play a role in reducing carbon footprints.

“We can make products which can replace plastics and chemicals to be more sustainable.”

Yan will be joined at the event by PhD student Nicole Tratnik, who joined Yan’s group in 2016. Tratnik will present a cornstarch-based adhesive she developed with Ontario-based agricultural feed – one that is formaldehyde-free and fire-resistant. Tratnik’s products could be adapted to manufacturing operations in forestry, construction and building products, according to Yan.

Elsewhere at U of T, researchers are working closely with partners in the auto sector to develop technologies that are driving a shift towards environmentally friendly electric vehicles (EVs).

“Today, EVs are very conservative because there isn’t really a lot of intelligence in how their battery systems are used,” said Olivier Trescases, the director of the U of T Electric Vehicle Research Centre (UTEV) and professor in the Edward S. Rogers Sr. department of electrical and computer engineering.

“If you can improve that, you can really push the limits and get more range and better lifetime. So we’re embedding better electronics and mechanical design to get better performance from the EVs.”

One of the projects involves developing sub-systems for the world’s first all-electric pickup truck, the Bison – made by Toronto-based startup Havelaar Canada, UTEV’s founding industry partner.

Havelaar is consulting with UTEV on technology with the intention of becoming the centre’s commercialization partner – although Trescases said several other companies have since entered the fray to leverage UTEV’s expertise.

Another project involves designing battery systems for the A2B electric car, manufactured by Toronto Electric. Trescases describes the car as a “moving lab” that is used to test new technologies and platforms.

Trescases’s own area of focus is in power electronics – he holds a Canada Research Chair in Power Electronic Converters – but he said the advancements being made at UTEV wouldn’t be possible if it weren’t for the diverse range of expertise found at the centre.

“We’re combining electrical engineering, computer, mechanical, aerospace and robotics engineering,” he said. “One of the strengths of U of T is the ability to do multidisciplinary work. Instead of having lots of different researchers working in silos, we’re bringing them together and doing larger-scale projects that wouldn’t otherwise be possible.”

Trescases added that the technological and manufacturing breakthroughs that can be forged through such large-scale projects promise to make a huge contribution to the Ontario labour market.

“Through UTEV, we can train a new generation of engineers who can go out and contribute to this technology revolution,” he said.

“In terms of job creation, it’s a huge opportunity because there’s a massive shift happening and hopefully Canada can capitalize on it.”

With a file from Perry King