Flight PS752: A deadly combination of Iran's recklessness and incompetence, U of T expert says 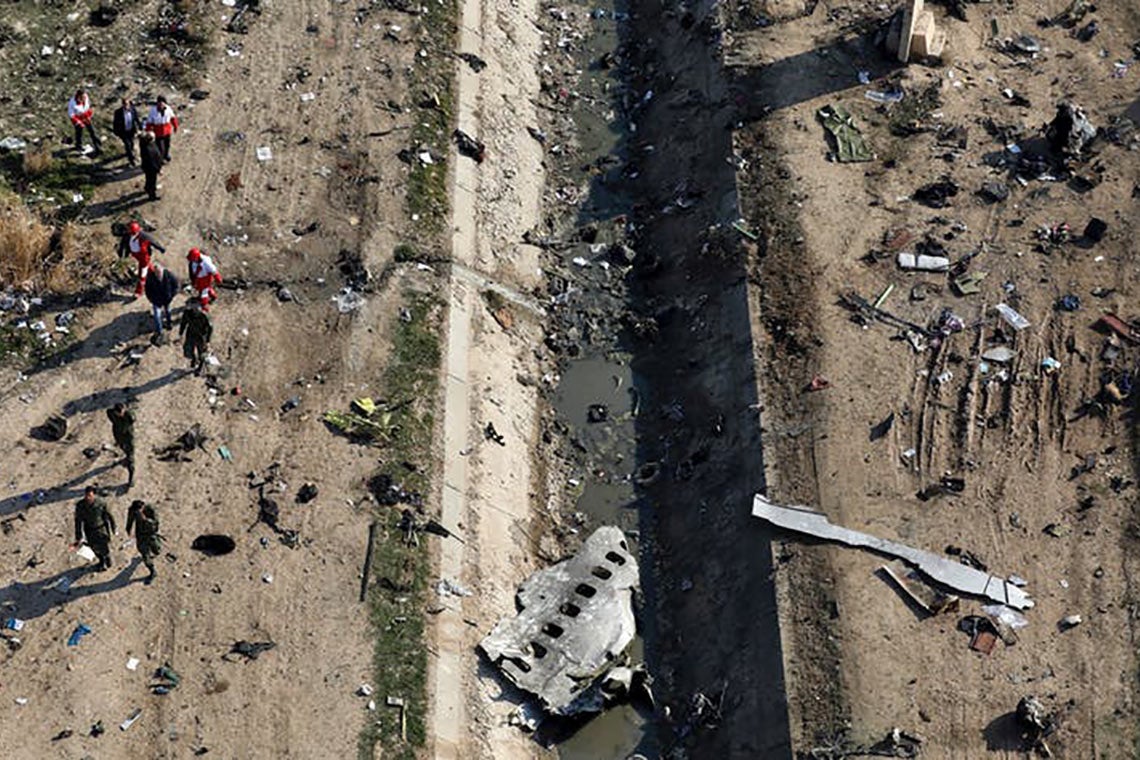 In this Jan. 8, 2020 photo, rescue workers search the scene where a Ukrainian plane crashed in Shahedshahr, southwest of the capital Tehran, Iran (photo by Ebrahim Noroozi/Canadian Press/AP)

The crash of Ukraine International Airlines Flight PS752, with the loss of all 176 people on board, including 15 children and 57 Canadians, was a horrific tragedy. It’s also deeply revelatory regarding several seminal issues involving Iran.

Flight PS752 went down shortly after it took off from the Tehran airport, just hours after Iran fired some 15 ballistic missiles at two large bases in Iraq that housed American and allied forces, as retaliation for the U.S. drone strike that killed Qassem Soleimani.

The coincidence of the airline crash and the Iranian retaliation resulted in speculation and suspicion. The Iranian regime immediately and implausibly claimed mechanical problems as the crash cause. As telling evidence emerged that the aircraft was brought down by Iran’s own anti-aircraft missiles, Iran’s Civil Aviation Organization chief, Ali Abedzadeh, adamantly denied that the crash was caused by missiles. And then the story changed again: Iran finally admitted that it “unintentionally” shot down the airliner and blamed “human error.”

No weapons of mass destruction

Certainly, initial claims by Western intelligence that the airliner was brought down by Iranian missiles deserved careful scrutiny. “Intelligence-based” assertions by George W. Bush and Dick Cheney that there were weapons of mass destruction in Iraq, after all, proved to be starkly wrong.

Nonetheless, it seemed a reasonable conclusion when extremely cautious leaders like Canadian Prime Minister Justin Trudeau asserted that on the basis of strong evidence, including from Canadian intelligence services, it was highly likely that Iranian missiles shot down the airliner – an assertion backed by the British prime minister.

There was also a video verified by the New York Times that appeared to show an Iranian missile hitting a plane in the air near Tehran’s airport, and a video trending on Iranian social media showed the same.

Further, there were reports that Iran had been bulldozing part of the crash site, that it did not secure the site as protocol would require, that much of the ground evidence is now gone and that Tehran is refusing to hand over the black boxes as normal procedure would demand.

It all strongly reinforced the impression that the Iranian regime was dissembling about the cause of the crash.

But what’s likely to be most disturbing to the Iranian people is the larger picture of the behaviour of the Iranian regime and its long-term implications.

The theocratic regime has efficiently and violently suppressed all domestic dissent, and carefully but brutally fostered an image of regional and internal invincibility. It’s moved relentlessly to create a Shia arc controlled from Tehran, stretching from Iran to the Mediterranean. There was an aura of invulnerability around Soleimani, who led the Quds Force, representing the tip of the spear of Iranian imperial regional ambitions, domestic repression and world support for terrorism.

Soleimani seemed untouchable. Yet the Americans managed to so effectively reach him and remove him.

The Iranian regime, which threatened “hard revenge” for his targeted killing, settled for symbolic and feckless face-saving. Some of its ballistic missiles malfunctioned and others, either by design or prudent allied defence measures, failed to inflict any casualties when fired at U.S. bases in Iraq.

The response revealed something more than just fecklessness. The efficiency that the Iranian regime has repeatedly demonstrated in repressing any internal dissent seems to have evaporated when faced with an unpredictable, narcissistic and vindictive opponent like U.S. President Donald Trump, who chose not to play the game by the old rules.

The Iranian response was not only uncharacteristically weak but it reflected the fear of an all-out confrontation. Iranian overreach met Trumpian unpredictability.

The admission by Iran that its missiles brought down the flight is more than just a terrible tragedy.

It’s also revealed a deadly combination of the regime’s breathtaking recklessness and monumental incompetence. That the Iranian regime did not shut down air traffic when it was firing missiles at Iraqi bases, as any normal procedure requires, was nothing short of gross negligence.

The deaths of so many civilians, mostly Iranians, demonstrates the regime’s weakness, incompetence and callous disregard for the safety of its own citizens.

To be sure, the regime in the future may well engage in asymmetrical warfare. Iranian military leaders are bloviating and making dire threats against the United States and the West, but the image of the regime’s invulnerability has been forever punctured by its corruption, melded with its carelessness and incompetence.

For now, the U.S. is imposing additional sanctions on top of the already devastating ones, and Soleimani is gone.

The people of Iran have been demonstrating en masse for months, making it clear they don’t want to die fighting for Iraq, Syria or Lebanon or spend scarce resources that are so desperately needed at home.

They may now more openly begin to blame the regime and become more emboldened.

Aurel Braun is professor of international relations and political science at the University of Toronto Mississauga.