Financiers are now controlling public works, much to the public's confusion

U of T's Mariana Valverde & The Conversation 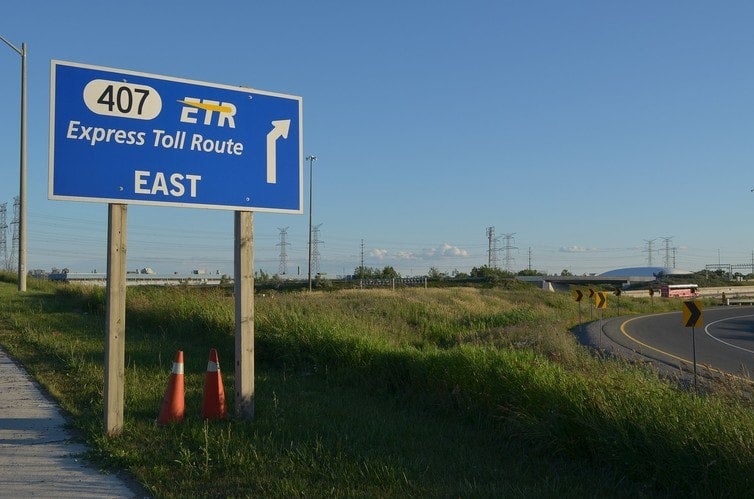 Ontarians got a taste of privatization in the 1990s, when the Conservative government of Mike Harris handed over the lucrative Highway 407 toll road in a 99-year lease for a fraction of its value (photo by CC BY-NC)

In the 1990s the large, nationally owned British Railways was split off into dysfunctionally separate entities and sold off to private owners in a world-famous example of complete privatization.

During the recent British election, polls revealed that most citizens now support the Labour Party’s promise to renationalize the system.

But suddenly these international debates have indeed become relevant to Canada, although the issues here are being obscured by the downright Orwellian terminology used by infrastructure insiders.

In Canada, outright privatization was promoted in the mid-1990s by the neoconservative government of Ontario Premier Mike Harris. But one of the first instances of infrastructure privatization, southern Ontario’s 407 toll highway, proved to be a disaster and so enthusiasm quickly faded.

But while they may have shied away from completely selling off major public works, Canadian governments at all levels have still found ways to go along with the global trend of giving private capital a bigger role in public works.

As I’ve learned as an academic researching infrastructure governance, what’s emerged as the main Canadian model goes by the name of “public-private partnerships.” Ontario and British Columbia are its key promoters, though the Ontario government prefers to use the obscure term “Alternative Finance and Procurement,” which does not contain the politically sensitive word “private.”

If George Orwell, that foe of euphemistic government-speak, was still with us, he’d likely point out that “partnership” is a highly misleading term. Major provincial infrastructure projects like hospitals, bridges and transit lines do bring public and private sector “partners” together, but they’re not partnerships.

A legal partnership is a long-term agreement to join forces and share financial risks over time – such as a law firm with partners.

But today’s public-private partnerships are actually arrangements whereby corporations provide financing, engineering, construction and design services for projects chosen by governments and ultimately funded by governments. The construction folks do their work and leave. The lenders stick around to be repaid over a long period. And any project that cannot be made attractive to the big financial players simply does not get built.

Infrastructure financiers, including pension funds, make big profits. But in Canada, public-private projects have so far remained publicly owned. Some of these will generate revenue – like transit lines via passenger fares – but many will not, since in Canada road and bridge tolls are politically unpopular. That’s one major reason why the financiers don’t really want to own the assets.

The bill isn’t due for decades

Why do governments continue to overpay for private finance, as Ontario’s auditor general pointed out in 2015?

Because of the time frame. Infrastructure investors, especially pension funds, want to secure revenue streams 30 and 40 years in the future. Even youthful Justin Trudeau will have long retired when the private finance credit-card bill comes due.

Another reason for the popularity and success of the Ontario/B.C. model is that governments are happy to use big contractors who hire union labour. And hospitals and prisons built through private finance and private procurement are staffed by the same public sector union workers as older facilities. So opposition from labour and NDP opposition is muted.

Nonetheless, the infrastructure model used for the past decade, in which major infrastructure projects continue to be publicly owned and union labour is protected, is now in danger.

The federal government is making noises that it will fund the new “Infrastructure Bank” – which is not actually a bank but an infrastructure agency, to confuse Canadians even further – by selling off the few major assets that Ottawa owns, mainly airports.

The Liberals’ Infrastructure Bank might not ever do much; its predecessor from the Stephen Harper era, Public-Private Partnerships Canada, hardly made a dent.

It sounds virtuous – but isn’t

But a very real danger lies in what insiders call “asset recycling,” an approach heavily promoted by infrastructure guru Michael Fenn. The term sounds vaguely ecological, but it means selling off choice public assets to raise funds for infrastructure capital costs, as Ontario did with 51 per cent of Hydro One. That selloff netted the province $9 billion.

The Ontario Ministry of Infrastructure’s 2017 update states that in addition to Infrastructure Ontario’s public-private projects, the province is also “unlocking the value of existing assets …all net revenue gains from the sale of designated assets are to be credited… to support the province’s key infrastructure priorities.”

If you did this at home, you’d essentially be selling your backyard to pay for a new summer cottage. You can make it sound somewhat virtuous by calling it “asset recycling,” but that’s what it is.

And we won’t see governments selling off dilapidated public housing, which could actually use new investment. Instead, they’ll sell well-maintained, revenue-generating assets – those that would, if they remained in public hands, provide steady revenues into the future.

So the privatizations that Ontario’s neocon Mike Harris dreamed of in the 1990s?

They may be at long last be successfully implemented by a host of Liberals.

Mariana Valverde is an urban law and governance, and infrastructure researcher. She is a professor of criminology at the University of Toronto. This article was originally published on The Conversation. Read the original article.