Fault lines: U of T research could protect cities in active earthquake zones 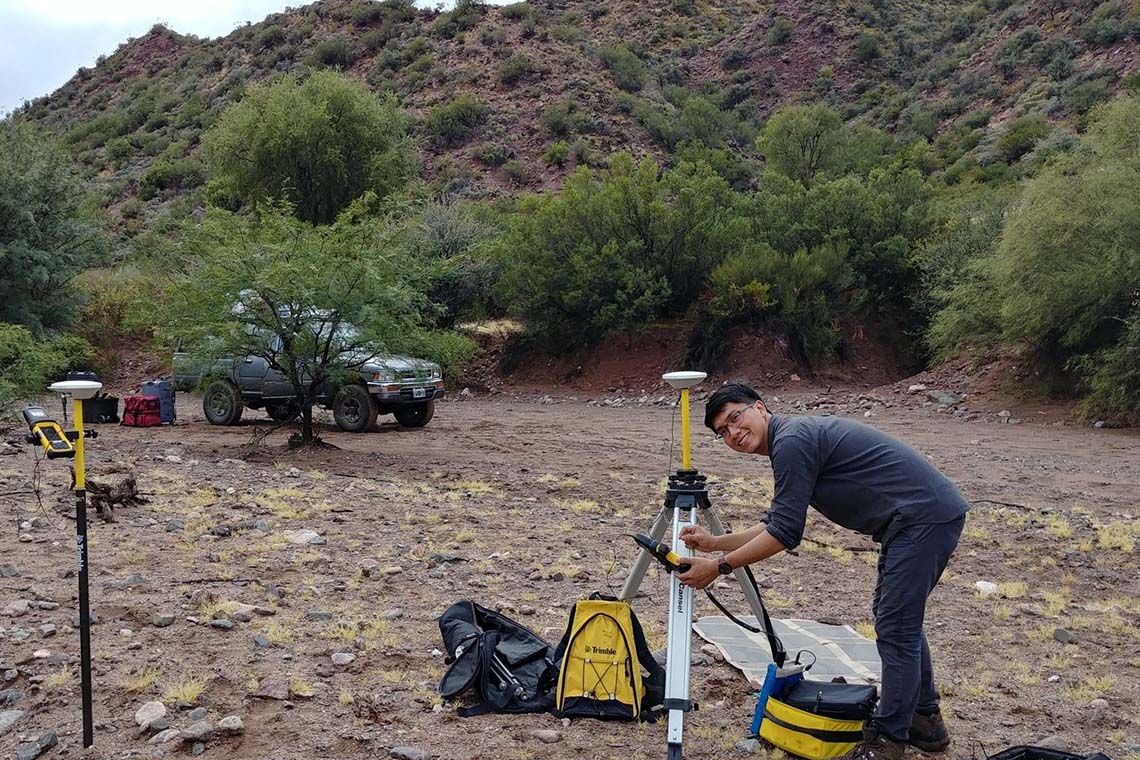 U of T's Jeremy Rimando sets up Differential Global Positioning System (DGPS) survey equipment to measure the amount of displacement on the Las Chacras Fault in San Juan, Argentina (photo by Cesar Distante)

A study from the University of Toronto Mississauga reveals new clues about an earthquake that rocked Argentina’s San Juan province in the 1950s. The results add important data about one of the Earth’s most active thrust zones and could help to protect cities in the region from earthquake damage in the future.

Jeremy Rimando, the lead author of the study and a PhD candidate in the lab of study co-author Lindsay Schoenbohm, an associate professor in the department of chemical and physical sciences. Their study, published in the journal Tectonics, focuses on the La Rinconada Fault in the western central area of Argentina.

“This region is seismically active and is bound by many thrust faults where one block of land moves over top of another,” says Rimando, who has conducted field research at several sites in the area. “It’s an area that experiences frequent earthquakes.”

The 30-kilometre-long La Rinconada Fault line marks a tectonic transition zone where the thin-skinned crust of the Eastern Precordillera meets the thick-skinned crust of Sierras Pampeanas in the Andes mountain range.The area is arid and rocky, with steep gravel-strewn hills and terraces that reveal the displacement of the Earth’s surface as the land shifts and slips along the fault line.

San Juan, with a population of 500,000, lies 15 kilometres to the north in an area bounded by several faults, including La Rinconada. A 1944 earthquake devastated the city and killed 10,000 people. Eight years later, San Juan experienced another severe earthquake with a recorded magnitude of 6.8. Rimando’s data points to the La Rinconada Fault as a potential generator of the second quake.

To determine if La Rinconada might be connected to the 1952 quake, Rimando calculated the slip rate – how fast two sides of the fault are moving relative to one another – which can provide clues about how often an earthquake might occur.

“We looked at features that were displaced by the fault line,” he says. “A low slip rate is usually associated with a long recurrence interval.”

Long recurrence intervals can mean that earthquakes may not happen often, but when they do, they can be big because of the strain that has built up over time. “If the slip rate is moving slowly, it can eventually build up a large amount of strain, resulting in big earthquakes that take place on a less frequent basis,” he says.

“Our data shows that La Rinconada is moving slowly at 0.4 mm per year,” Rimando says. He notes that the La Rinconada slip rate is associated with earthquakes ranging in magnitude from 6.6 to 7.2. “This is within the range of the 1952 earthquake.”

“Further investigation is required to determine the timing and recurrence interval on this fault, but knowing the very specific likely magnitude is helpful for planners,” says Schoenbohm. “Buildings shake at different frequencies depending on the earthquake, so the most likely magnitude is more important to know than the maximum magnitude. Narrowing that range as much as possible is really useful.

He adds that researchers "can’t definitively say that this was the fault, but we have added to possible proof that it could be because of the similarity in magnitude of the 1952 earthquake and the possible earthquake magnitudes that this fault caused. This information could impact building locations, zoning requirements and engineering infrastructure.”

Funding for the study was provided through the Natural Sciences and Engineering Research Council of Canada Discovery Grant program.